We finished off the soccer season in November.  It was Luke's first try at team sports.  He learned a lot, and we learned that his competitive, aggressive personality might not quite be ready for team sports.  As one of the youngest players he just had a hard time being motivated on game day.  Water breaks were probably his favorite time. 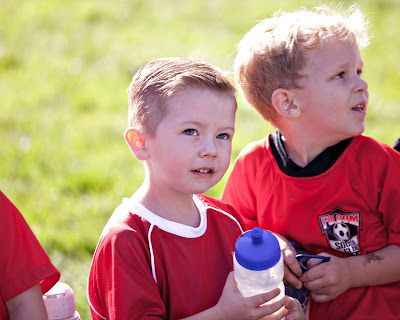 Noah got on a team with a bunch of his friends from church.  It was fun for him to play with his buddies and fun for me to chat with so many of my friends that I don't get to see often enough. 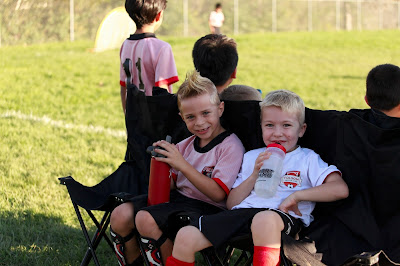 And Leah sure got used to spending a lot of time playing in the grass and cheering for those brothers. 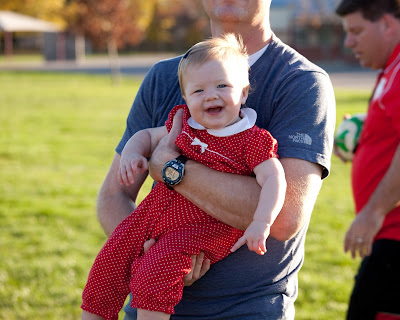 Noah did an awesome job at his first jog-a-thon!  He totaled 39 laps and just kept running.  I was busy marking lap cards and every time he'd run by he would say, "Mom! I'm tired!" or "Mom, I feel like I'm going to be sick!" So I'd tell him to walk for a lap and then run again.  He'd nod his head and then take off running again. 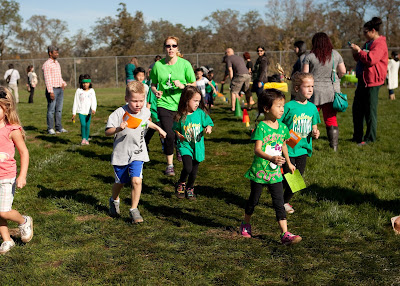 I was so proud of him for pushing himself.  And then I was shocked at how hungry he was the whole rest of the day! 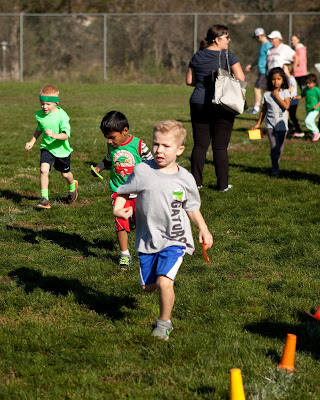 Luke was a great cheerleader as Noah ran, and Leah did her part just by cooperating and being content while all of that lap running was happening. 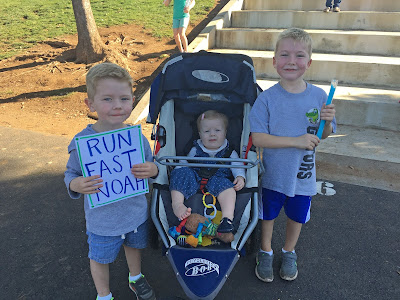 Noah sent his first text message, and I was the lucky recipient! 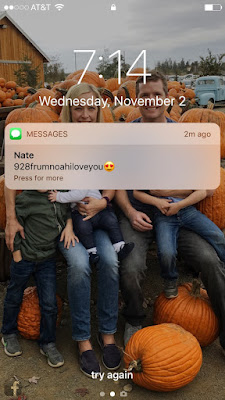 One night when Nate was working late the kids and I took advantage of family night at Chik-fil-a. 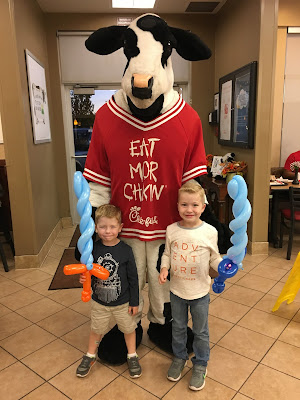 My first round of Joy School came and went.  I love this group of kids, and I really loved seeing Junie exercise her leadership skills during free play time! 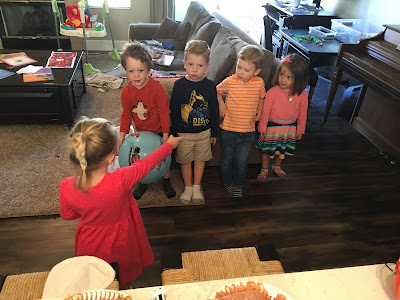 When Luke is growing he gets really tired and really hungry.  With five minutes to go in sacrament meeting he curled up on the floor and took a 45 minute nap. 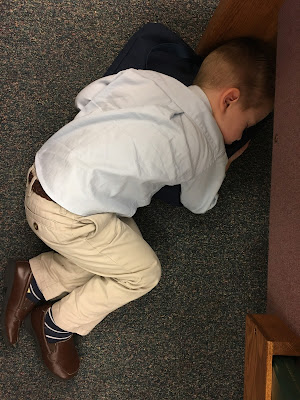 Cookies make every day better, especially a day when Mom needs to get a bunch of errands done before kindergarten pick up. 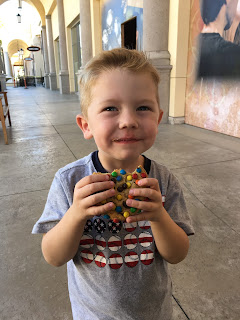 Leah needed some extra snuggles while I was cleaning up dinner.  She cozied up with Nate and got so comfortable that in minutes she was out for the night. 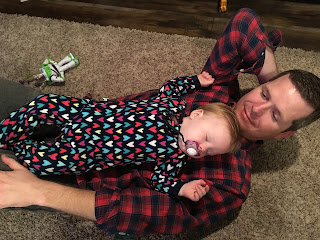 Nate and Noah went off to a football game with friends, so Luke and I (with Leah, of course) went on a date of our own to Menchie's. 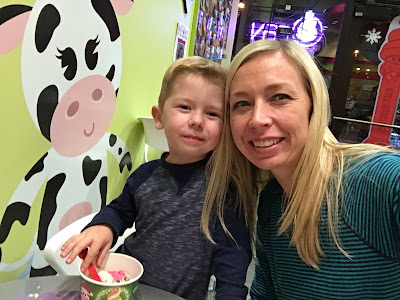 This girl gets into EVERYTHING.  She really doesn't care about toys right now.  It's more fun for her to just go from one place to another pulling anything and everything out of where it belongs. 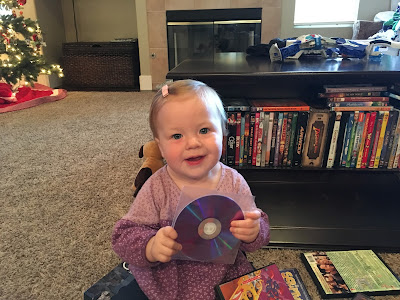 My keys had been lost for months.  It felt like a metaphor for my year: forgetful and misplaced a bit.  Our back seats in the van are almost always down, but when I needed to put them up for a carpool, ta da!, there were those darn keys.  Maybe that's a metaphor too: the fog is clearing, and I'm not quite so lost in the thick of it anymore. :-)  Getting more sleep (thank you, Leah) helps with that a LOT! 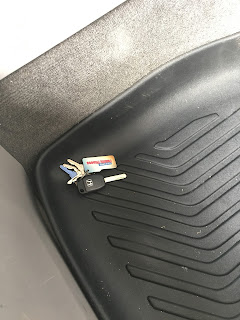 I loved seeing our pantry door decorated with so much Thanksgiving artwork! 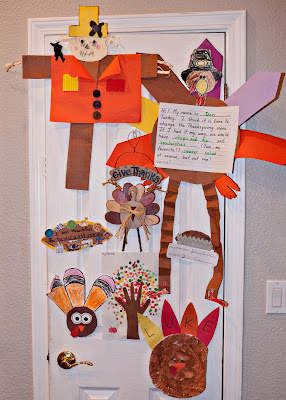 These two were from Noah: 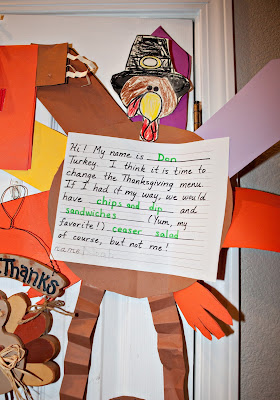 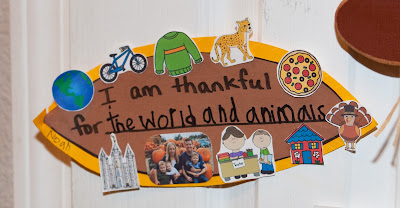 Luke made this one when I was teaching Joy School: 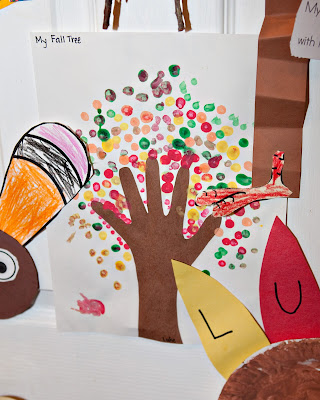 And, I love that we continued this tradition of thinking of the many, many things we have to be thankful for during the month! 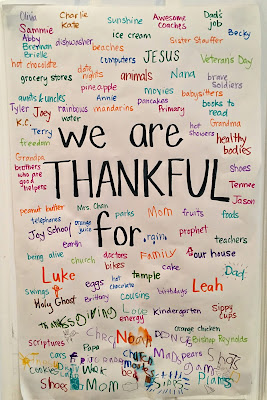