I tried to call Noah 'Nemo' the other day after a really good swimming lesson, but he quickly corrected me and said, "Mom, I'm NOT Nemo.  I'm just a swimmer!"  Got it.  And maybe that has something to do with the fact that he REALLY hates that movie, because according to him "It's just sad Mom!"

Back to swimming.  Oh, my has this been the summer of learning to swim.  I've spent more time in the pool with my two little fish than I have since I was a kid myself.  Lots of swimming practice combined with the teaching magic of Maddy Millet have turned Noah into a kid who can at least save himself in the water.

He started to make a lot of progress around the Fourth of July when the girls came from Bakersfield and they all spent every day swimming together.  A little pressure from some older swimmers definitely helped.  Noah's always been comfortable in the water -- on his own terms.  Going into 'the deep' or having to swim what he deemed too far were confidence issues that he just had to work on.

But this week it all kind of came together.  Sure, his strokes can use a little help, but we've got a swimmer who can get his head out of the water to breathe, had a darn fast backstroke and is pretty good at treading water.
Posted by Dianna at 3:23 PM No comments:

Last week we escaped the valley heat for a couple of days and cooled off in Tahoe.  It was past our usual dinner time by the time we got there, so we stopped at a restaurant to fill some hungry tummies.  As soon as the kids menu was placed in front of him Noah decidedly pointed to a picture and matter of factly said, "I want THAT."  We double checked more than once.  You really want mac and cheese with a salad? Yes, he did. 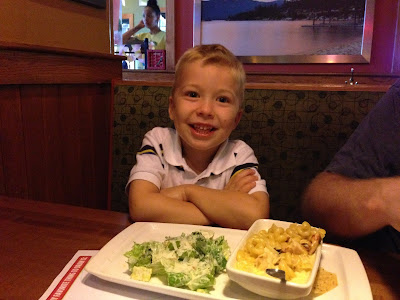 Noah is by no means a picky eater, but salad just hasn't been his thing.  Nate and I just shook our head, not surprised really by his choice, and more proud of him that he's so willing to try new things when it comes to food.  And really, what's not to like about Caesar salad?

A whole lot of our two days was spent in the water.  We tried out our first Nevada beach and loved it.  While it was a bit of a drive, Sand Harbor beach was beautiful.  It felt like the epitome of summer: lots of beach goers, life guards roaming, ice cream and milk shakes close by and warm, warm weather. 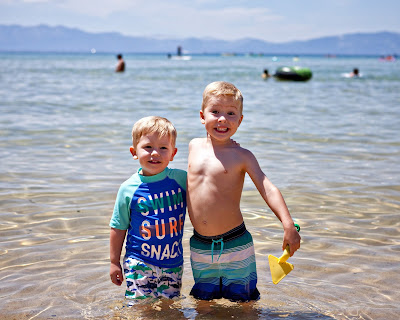 We were smiles all the way around. 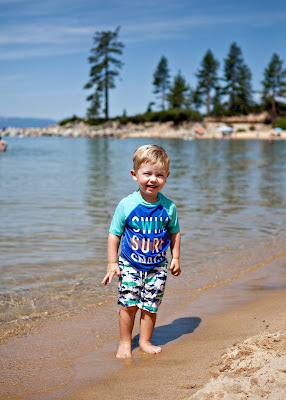 Noah is very into 'striking a pose' these days. 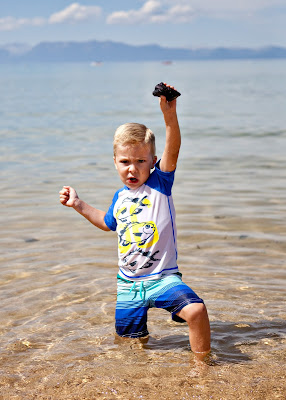 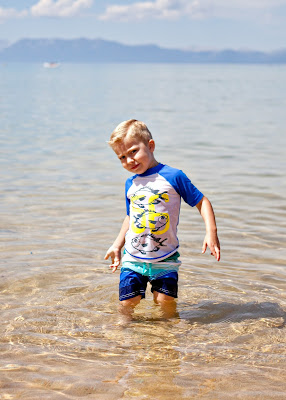 These boys went from the water to sand and back again at least a hundred times.  I loved that there was no current or looming large wave to watch out for.  Tahoe beaches are the best! 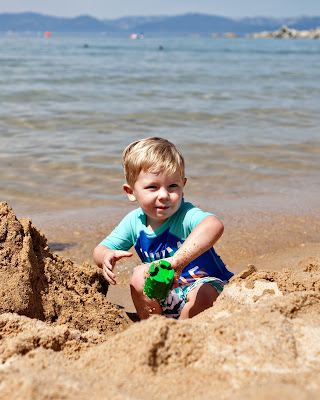 When they did decide to take a break from the sandcastle building and splashing, Noah and Luke found Grandpa who had them giggling uncontrollably by playing 'this little piggy'. 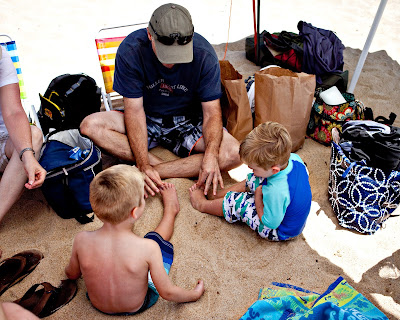 As if the lake wasn't enough, these silly boys wanted some time in the hot tub after we got home. 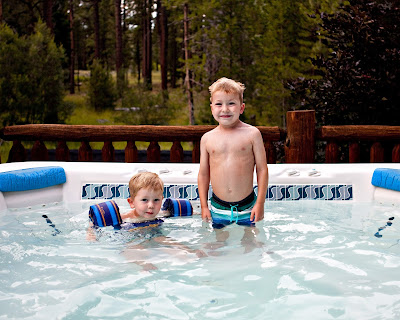 Our dinner that night was no surprise.  There's hardly a time that we're up there that we aren't making a visit to Tahoe Pizza Company.  This might be my favorite picture we've taken in that silly car so far. 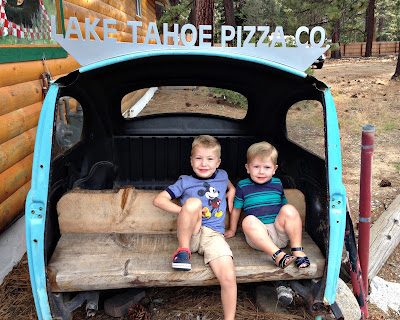 We stayed close to the cabin on our second day riding bikes, playing and finding some more water to play in.  It's hard to believe that in May we were kayaking in the backyard and the water was barely up to the boys' ankles on this trip. 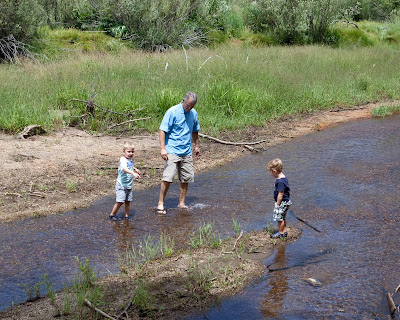 After exploring the river (or is it a stream now?) and finding some big sticks along the way, it was time for s'mores.  Grandma knows how to win these guys over.  All it takes is some roasted marshmallows. 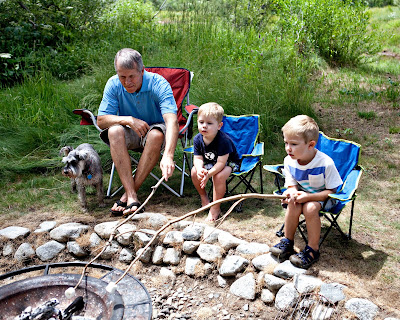 Posted by Dianna at 2:50 PM No comments: