Noah has been patiently waiting for his turn as catcher to come around, and Saturday was the day. 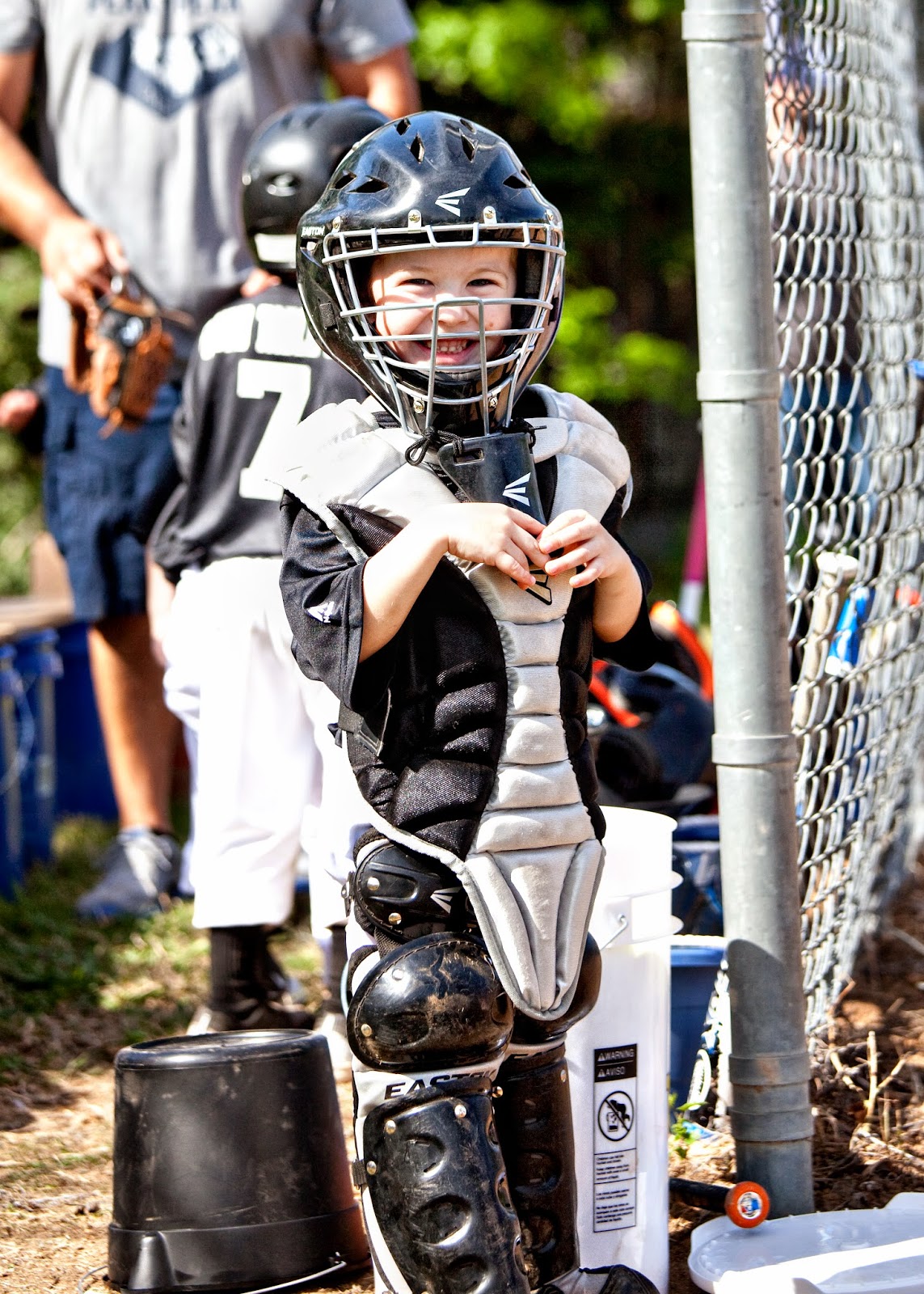 Oh, he was all smiles after getting that cumbersome gear on! 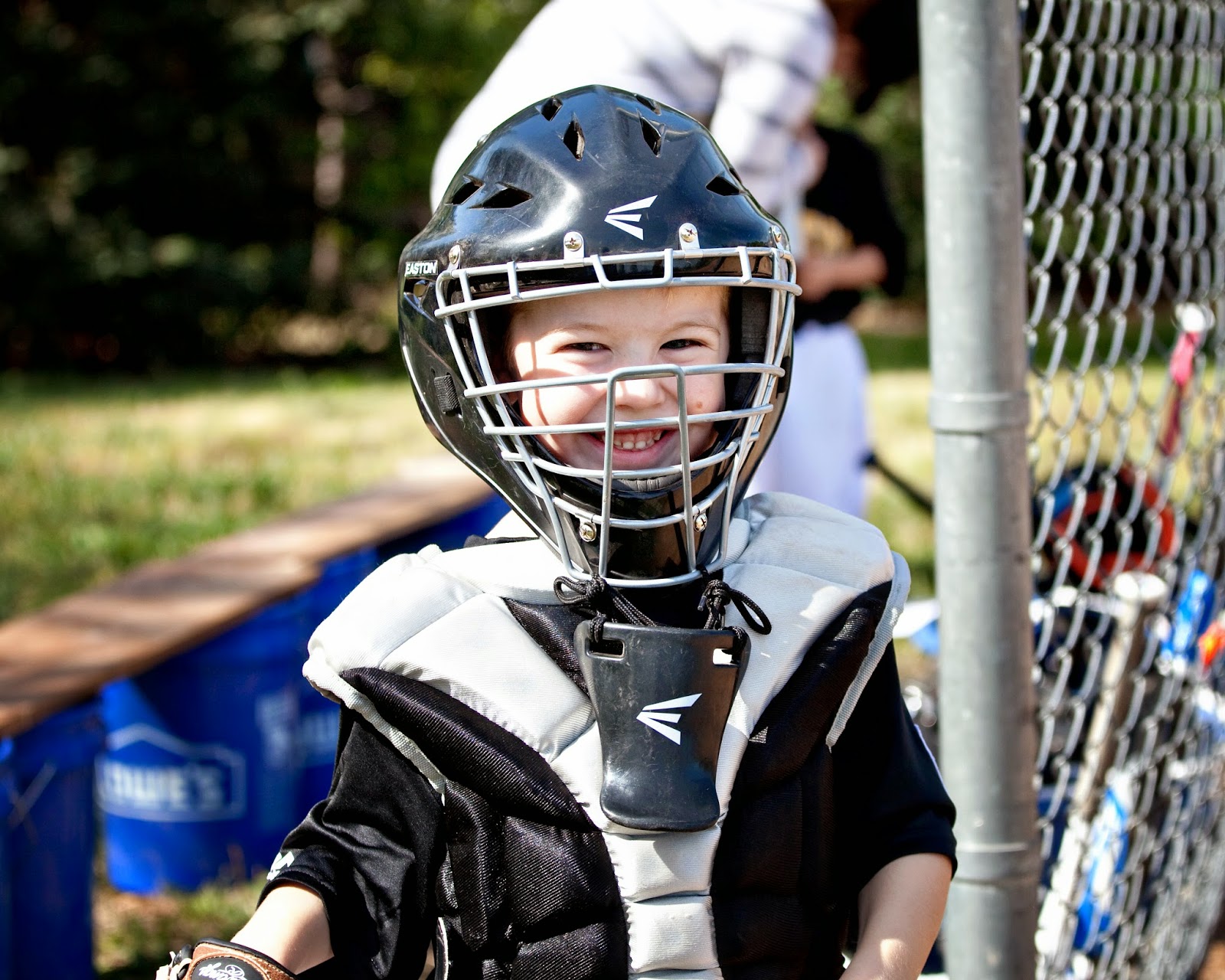 This four year old of mine is a kid who likes a job and staying busy, so catcher is totally his thing. 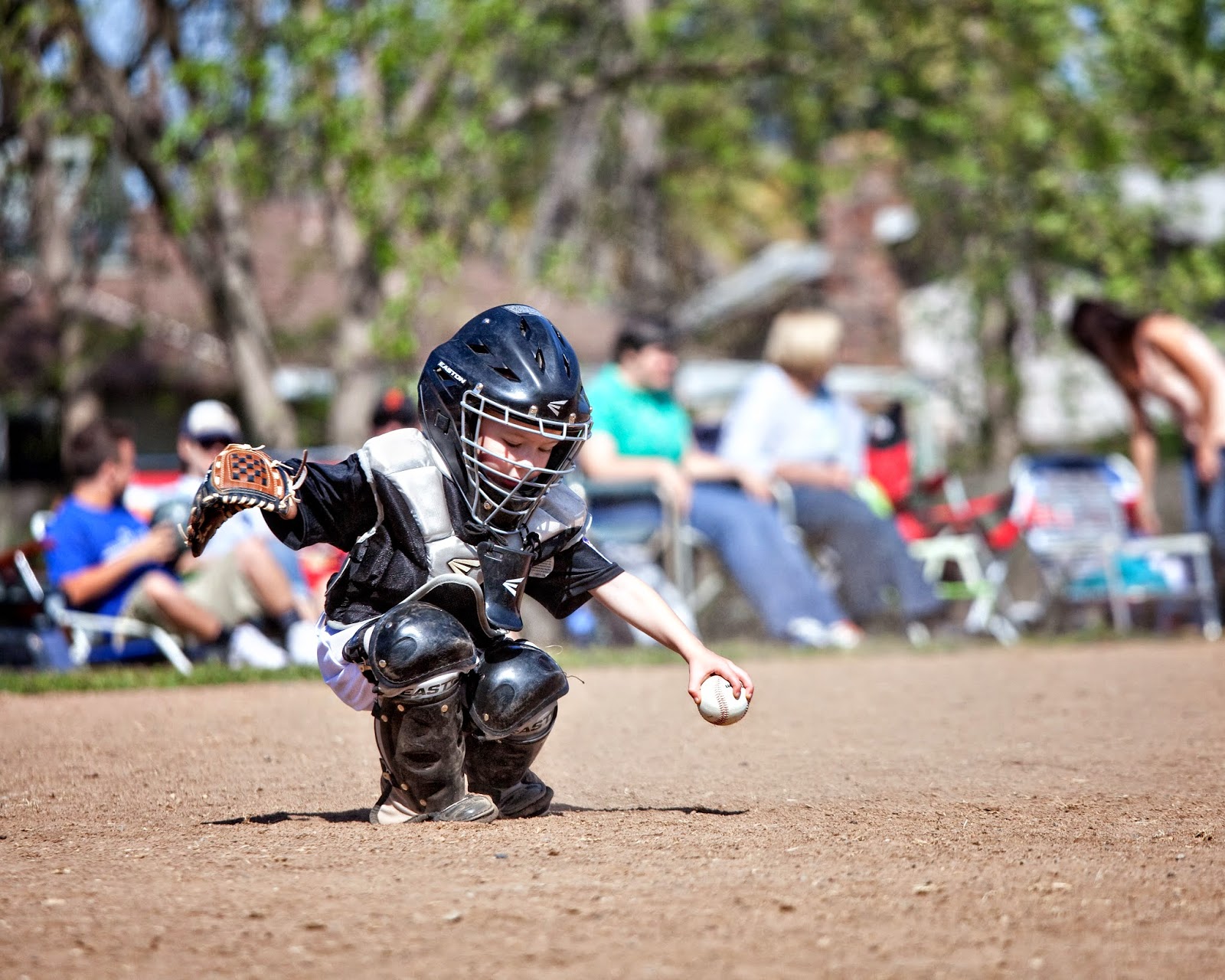 We just loved how he'd go after the ball when it was thrown into home plate, and then, in all of his armor, carefully place the ball on the tee. 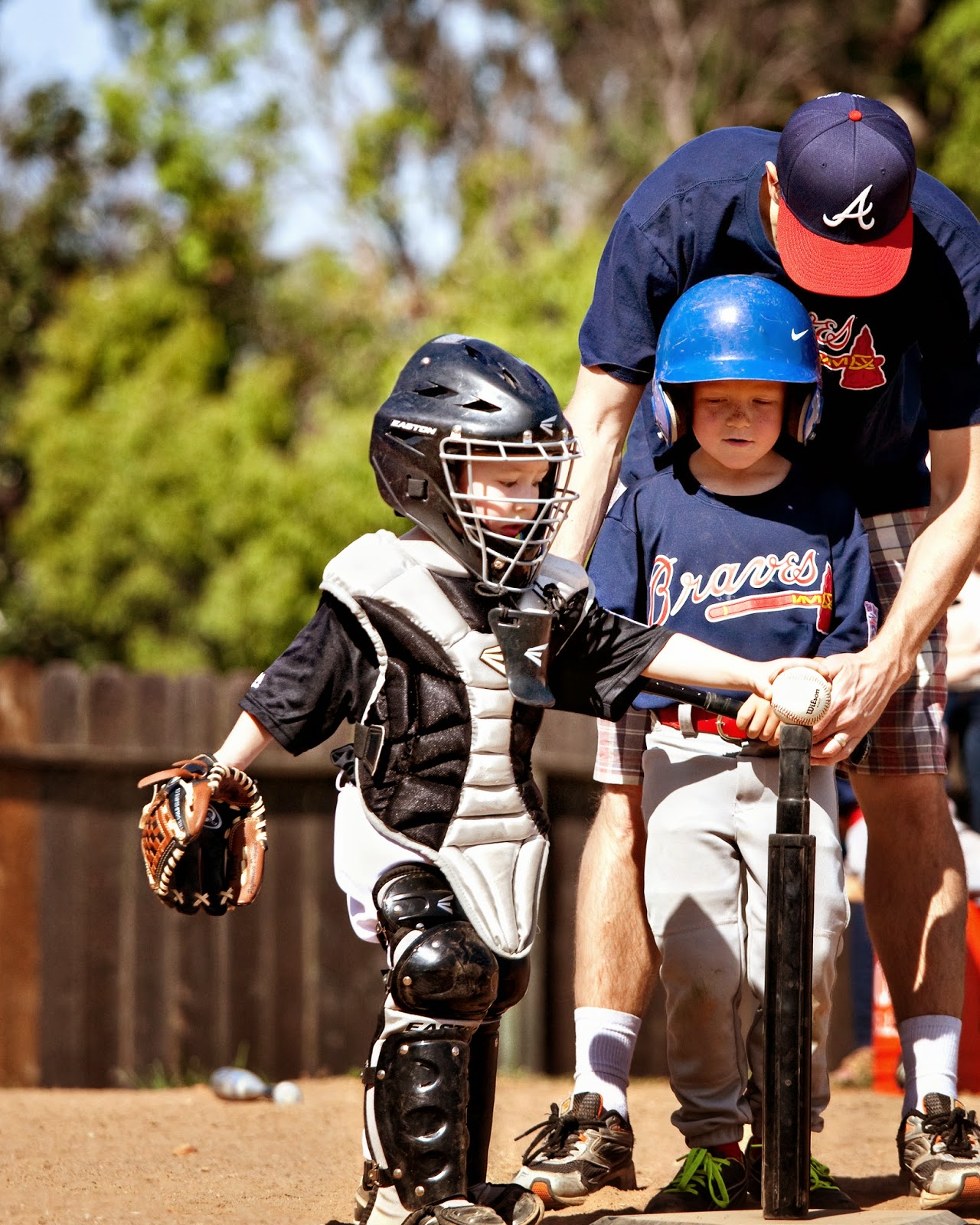 We've only had three games so far, but I'm also loving how Noah really is giving this t-ball thing his best effort. 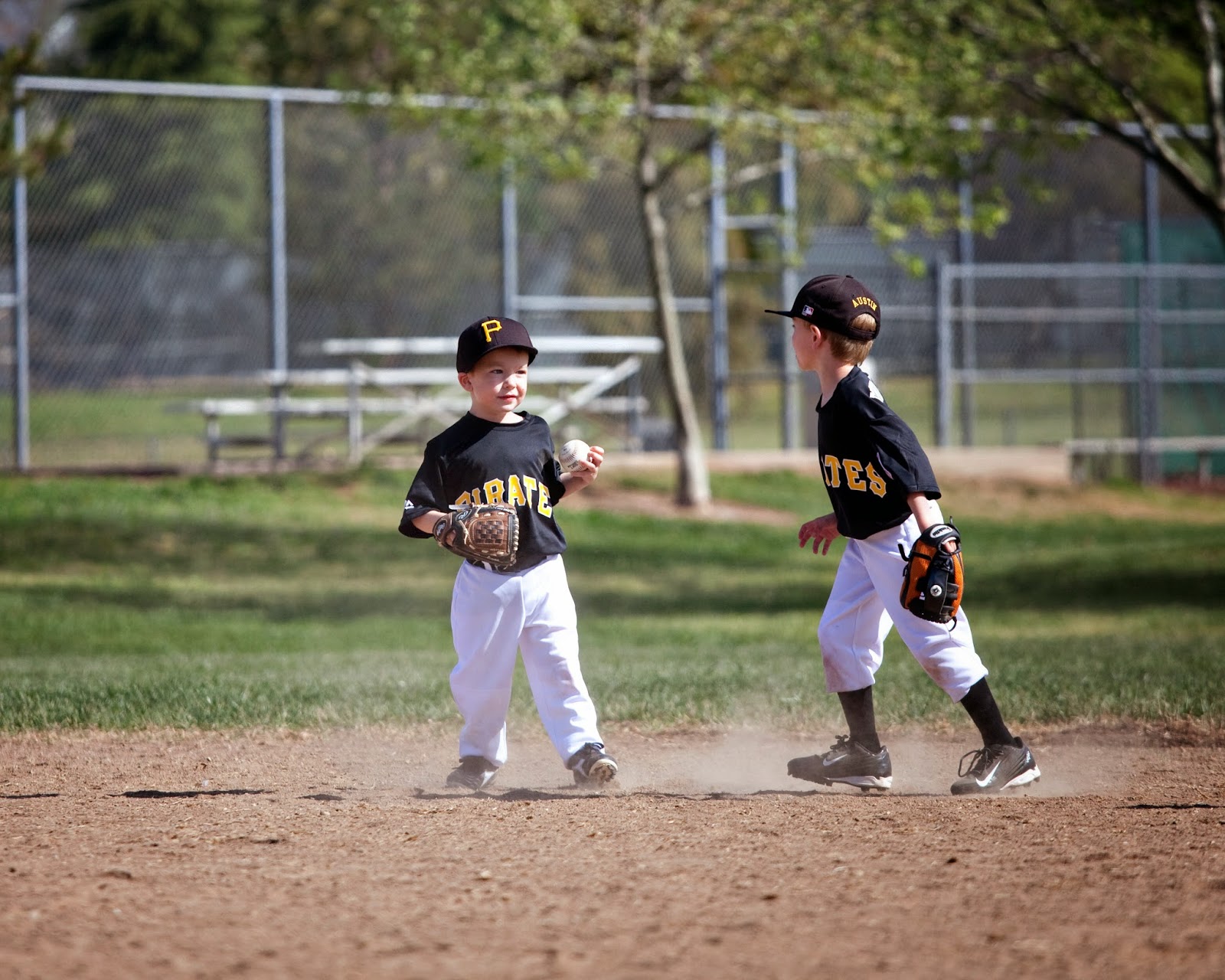 He's keeping his eye on the ball, 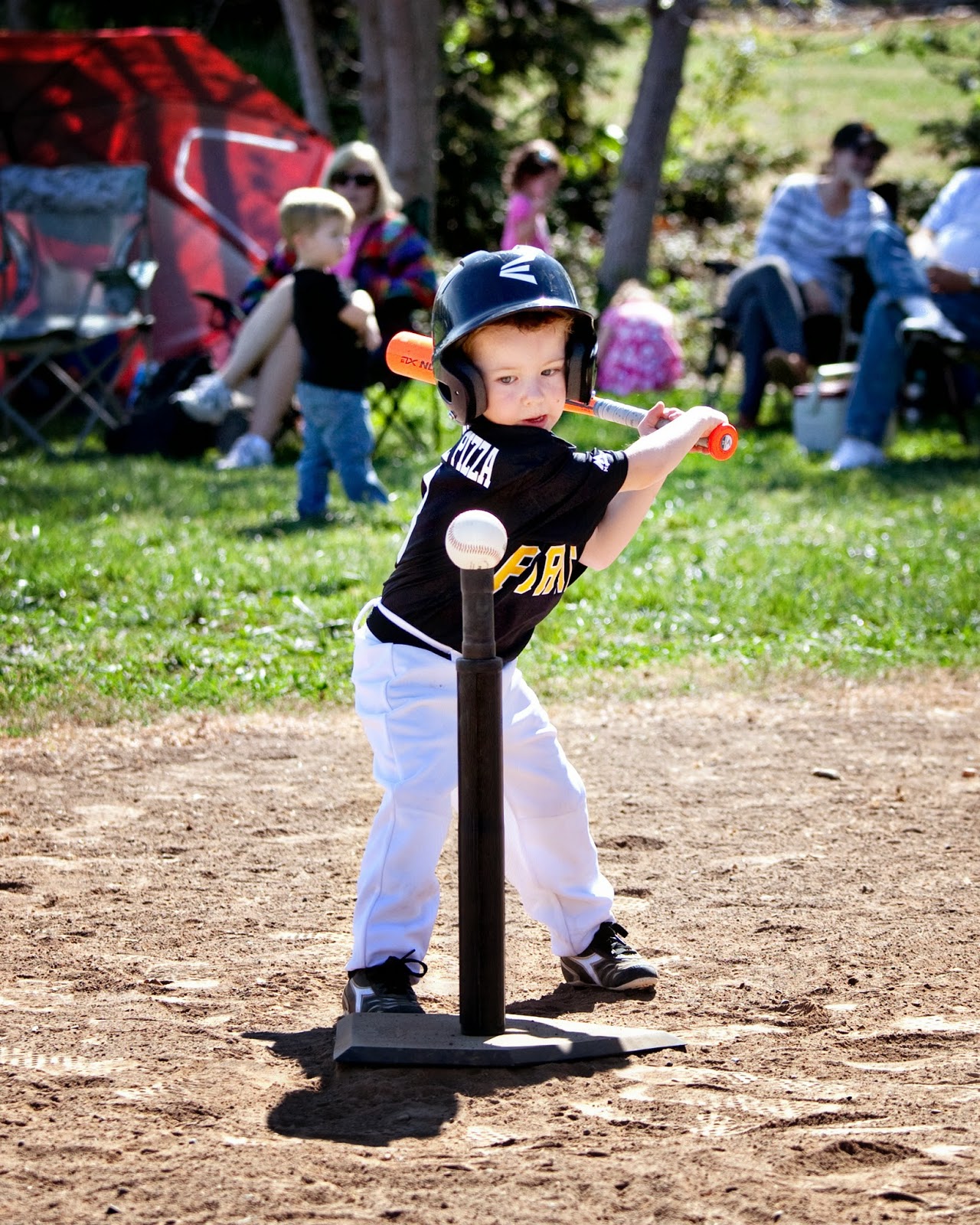 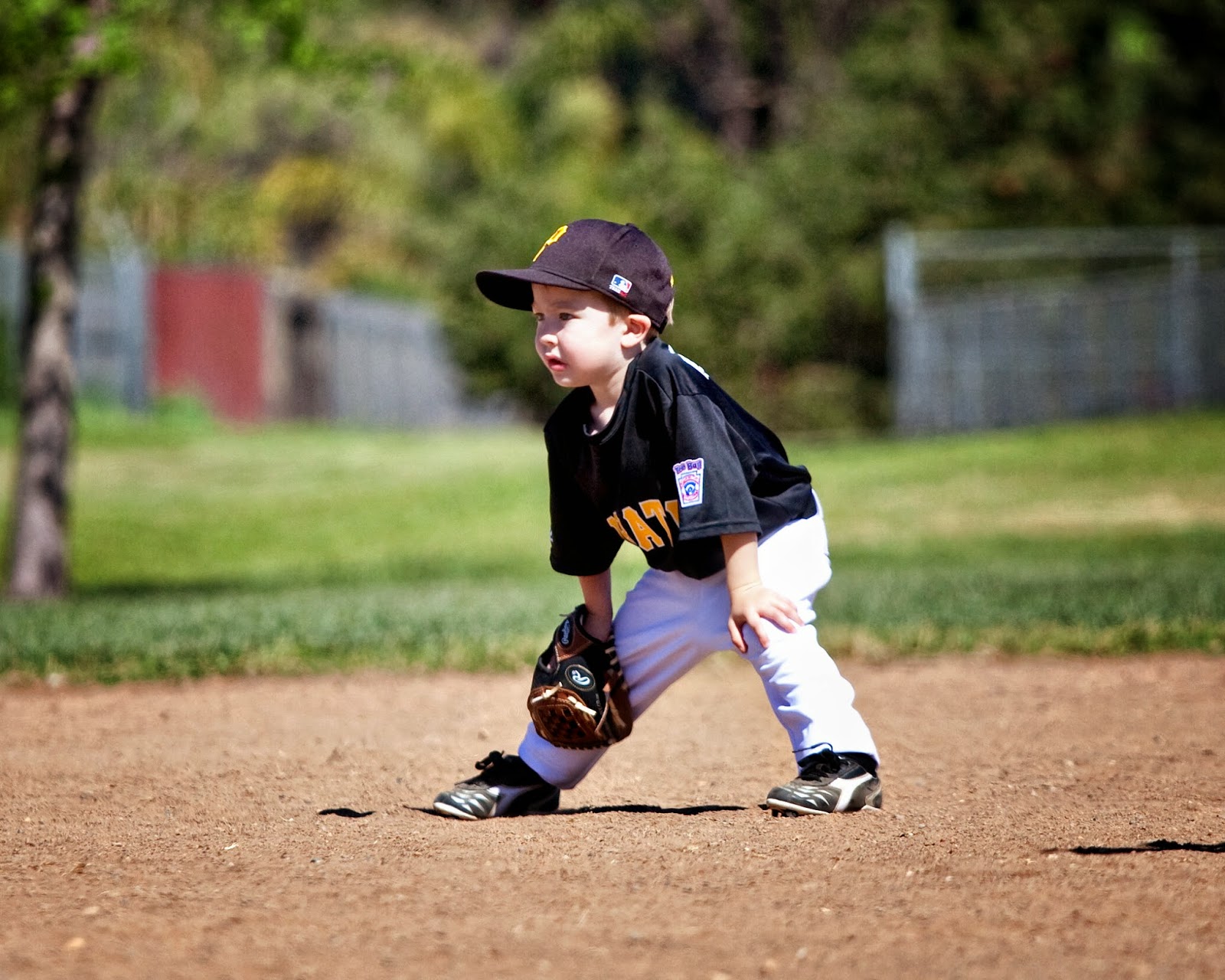 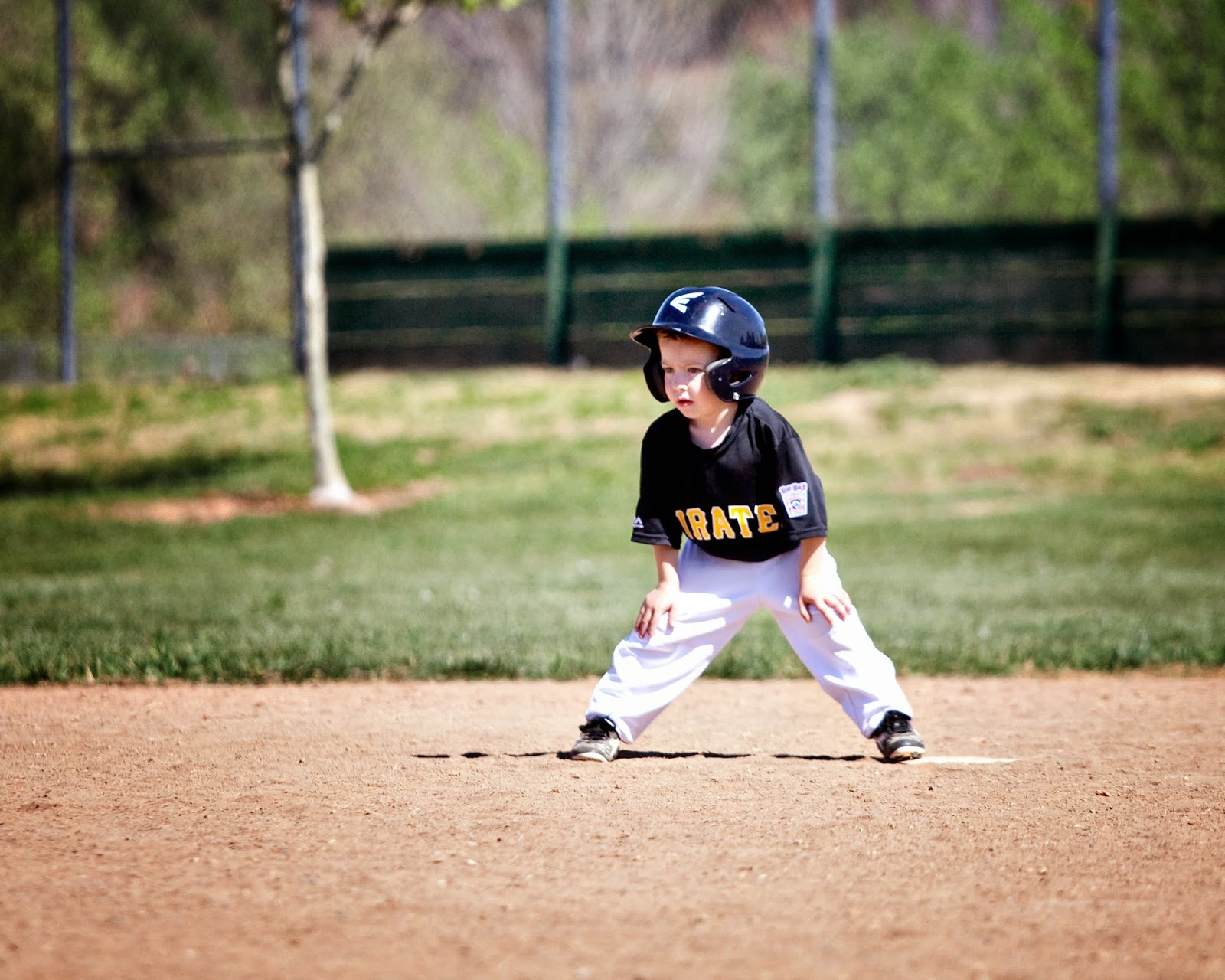 and having loads of fun (especially when it comes to running the bases). 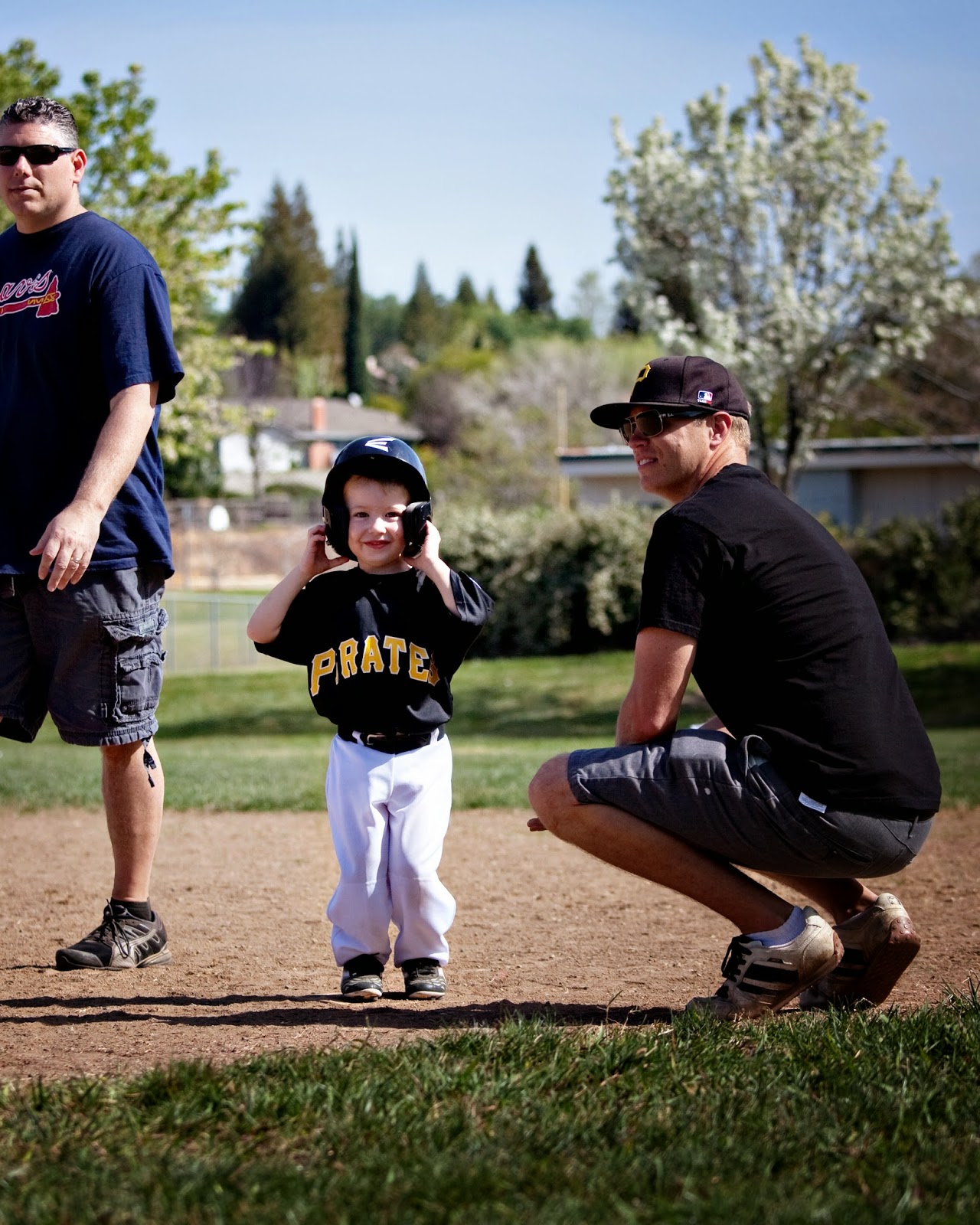 We've tried to help Noah ride a bike without training wheels on and off since his got his bike for Christmas.  He doesn't like the wobbly feeling, and I can't really blame him.  He's also not one to be pushed into something he's not ready for (potty training taught me that for sure).

So, we took a little break.  But with just a tiny bit of coaxing tonight, he got on that bike and RODE.  He just took off, and for the first time, got his feet on the pedals and just kept going.  Oh, it made my mama heart so darn proud!  We were taking video like crazy to show Nate, who was working late.  I'm so proud of this guy for doing a 'hard thing' and getting on that bike tonight!

I've said for a while that I'm holding off for as long as possible when it comes to sports or just about anything else that is scheduled.  This is the only time in my entire life as a parent where I create the schedule, I get my kids practically all the time, and I am not looking forward to that changing when things like kindergarten come along.  And, yet, somehow, one night in January, there I was, signing Noah up for t-ball.


Is it weird to say it just felt right?  But then as it came closer to meeting the team and practices, it didn't feel quite so right anymore.  Noah didn't want to practice with us.  He didn't care much about baseball AT ALL, except that his team name was the Pirates.  That definitely won him over.

Noah did great the first couple of practices because he's obedient.  He did everything his coach asked, but he still had some frustrations.  He's a kid who notices that someone else can hit the ball harder or throw it better.  Not being the best was a difficult pill to swallow at first.

He likes Buster Posey, so we use Buster as an example of even the best making mistakes a LOT.  Buster Posey swings and misses, Buster Posey misses a catch or has a bad throw.  Thank goodness for Buster.

The unknown.  You just don't know how it's going to go.  And while struggling is key to learning and growing in life, it's hard as a parent to watch your kid go through something hard...even if it's just four year old t-ball.  Noah and I had a few talks about how a great day is when you try your best and have fun.  That's all he needed to do.

The good news:  Why did we even stress??? Noah had a fantastic day from beginning to end. 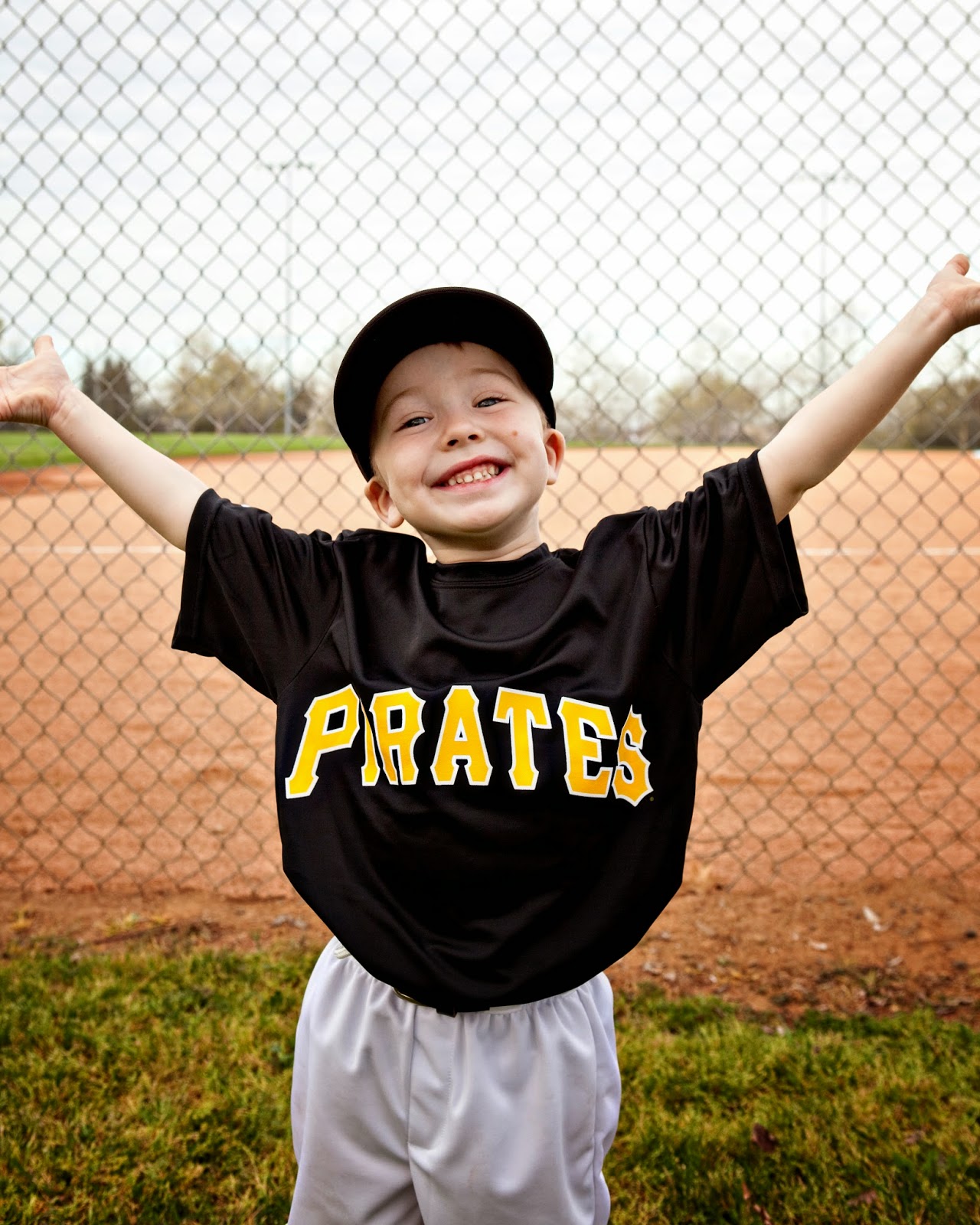 We arrived at the park where every team was decorating a truck for the parade.  Riding in a truck while wearing pirate accessories was a huge hit for the kids. 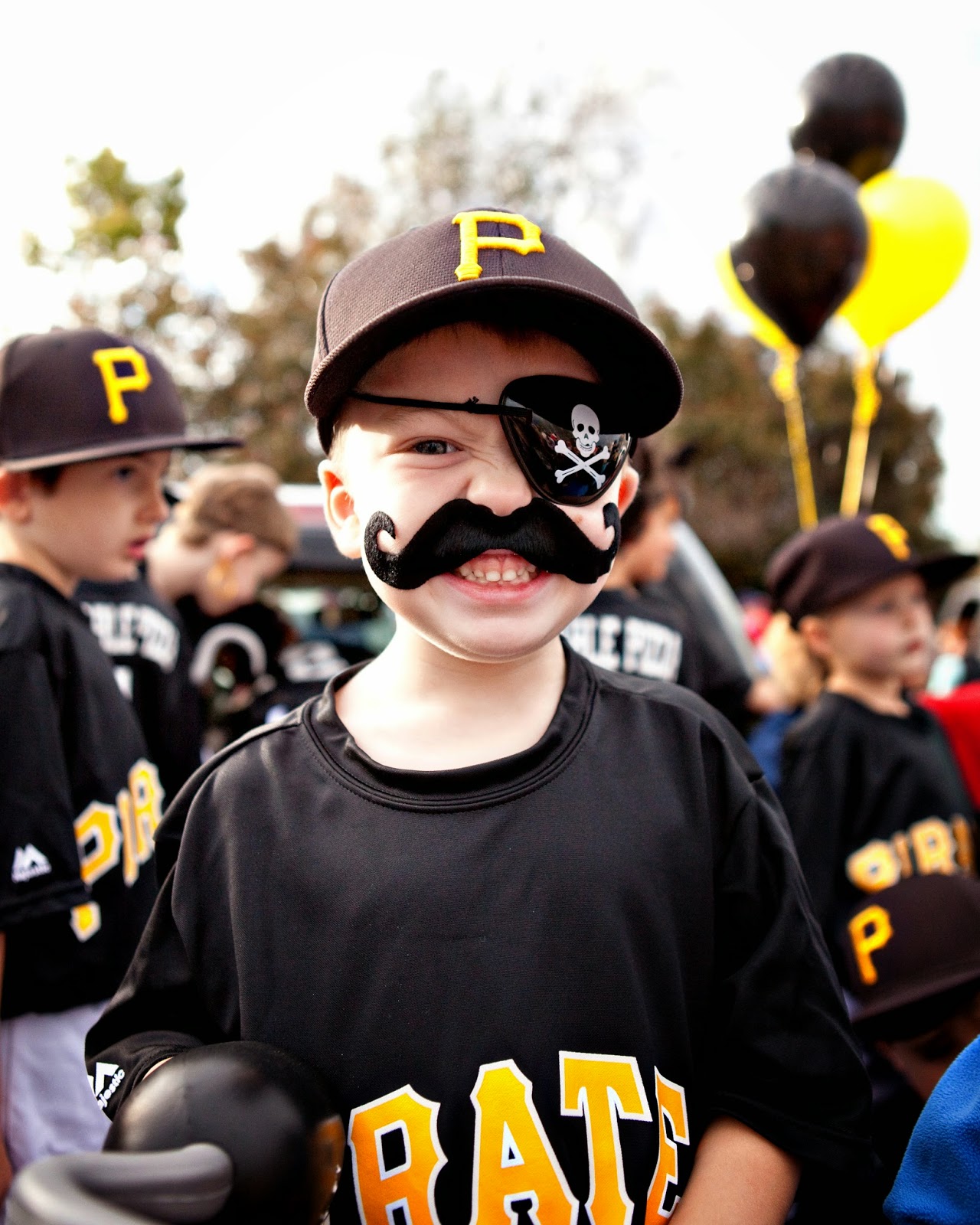 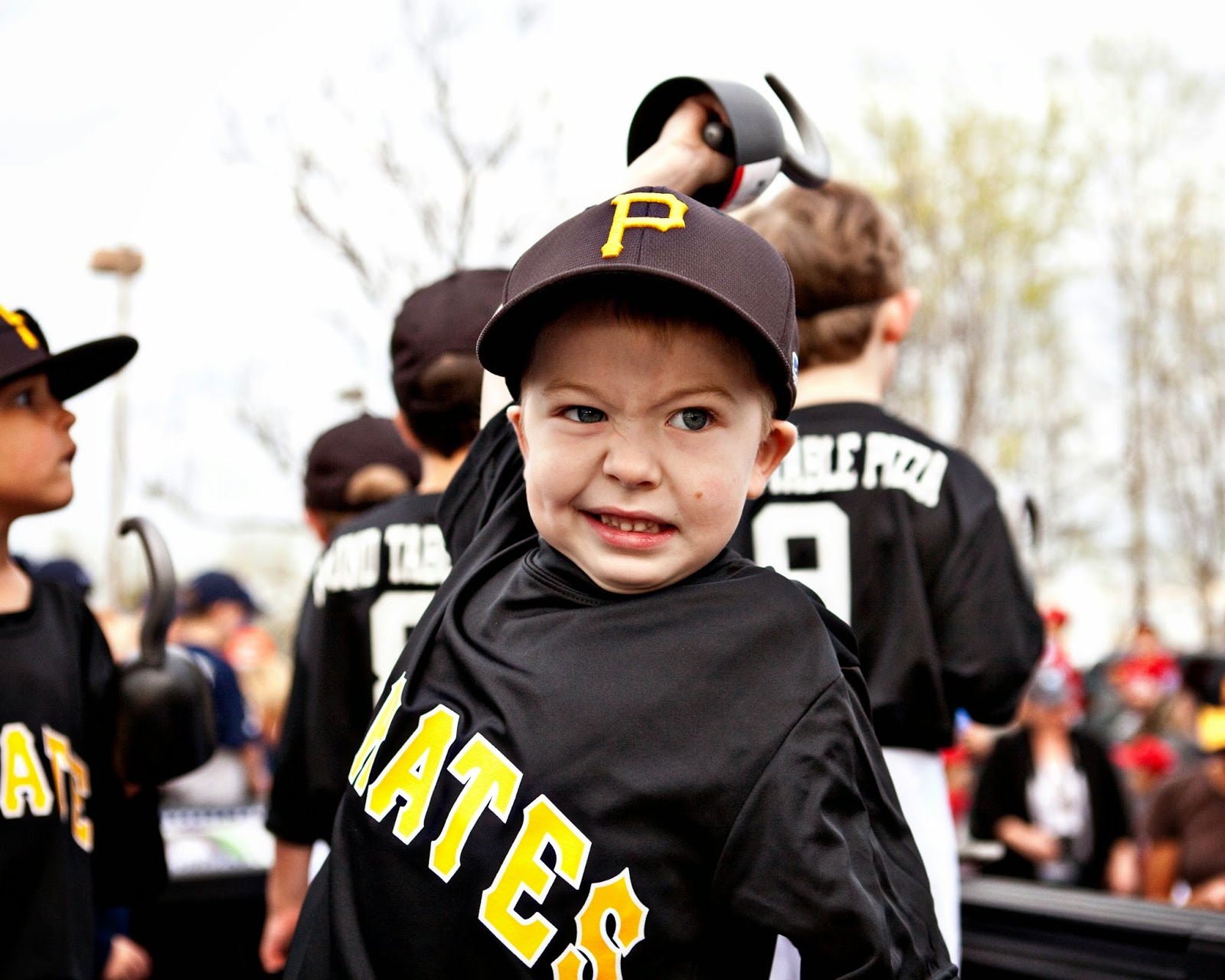 And while they were waiting the Chick-fil-a cow stopped by to keep the kids company.  Noah got huge laughs out of that. 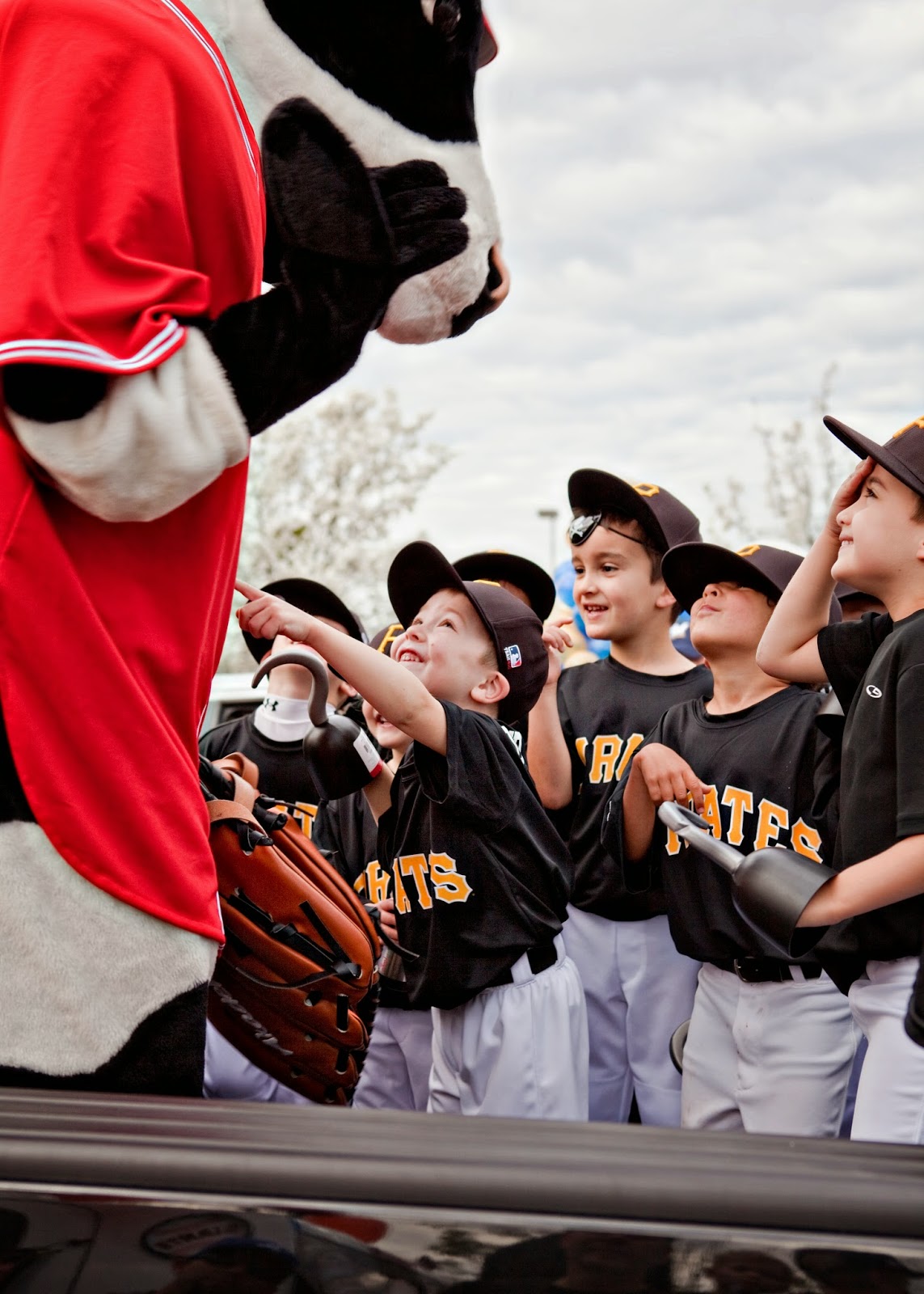 Noah's team is filled with great kids and awesome parents.  Only one kid on the team has an older sibling.  The rest are the oldest, which means all of us are also totally new to t-ball. 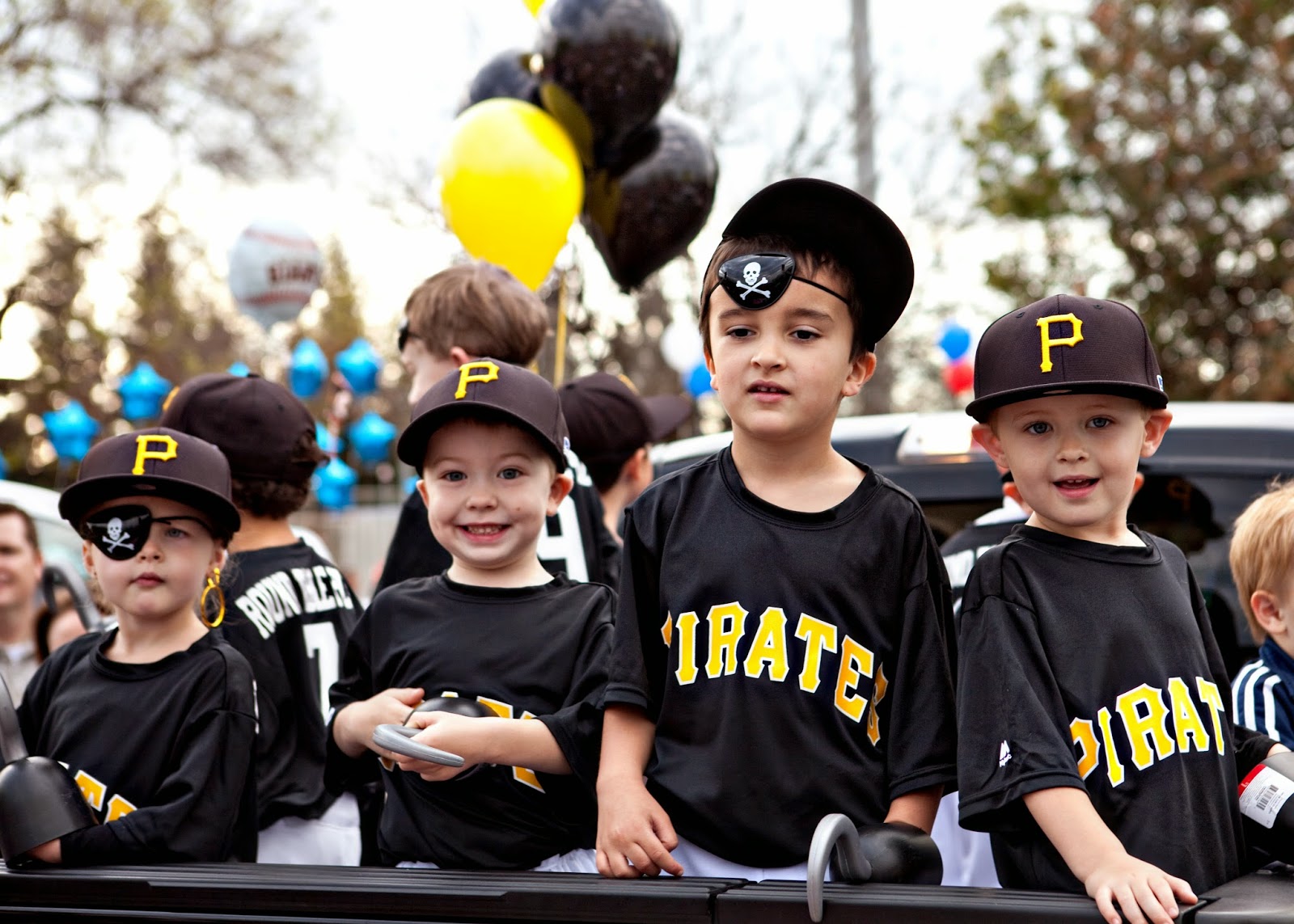 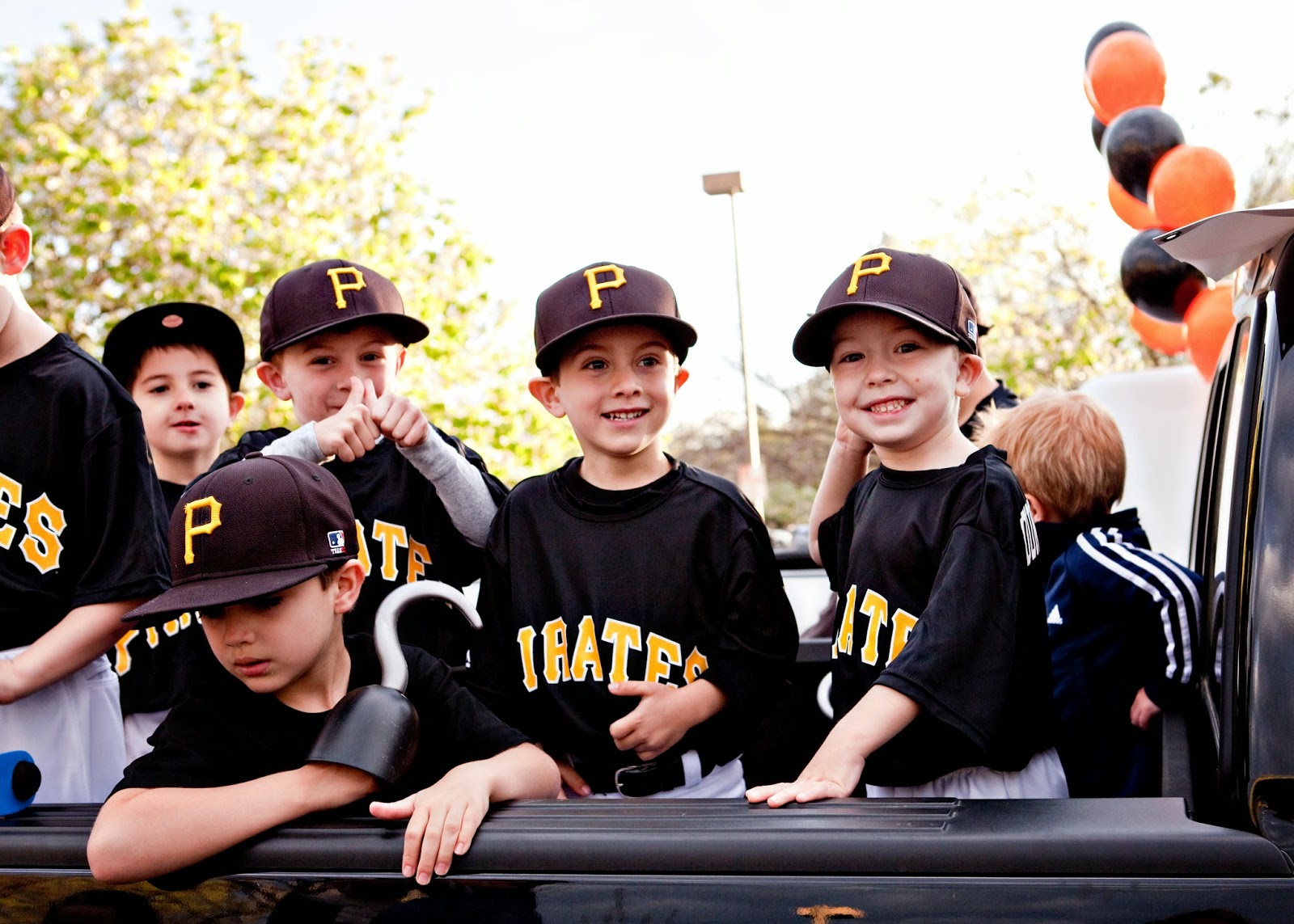 Noah has become buddies with Kylie, the one and only girl on our team. 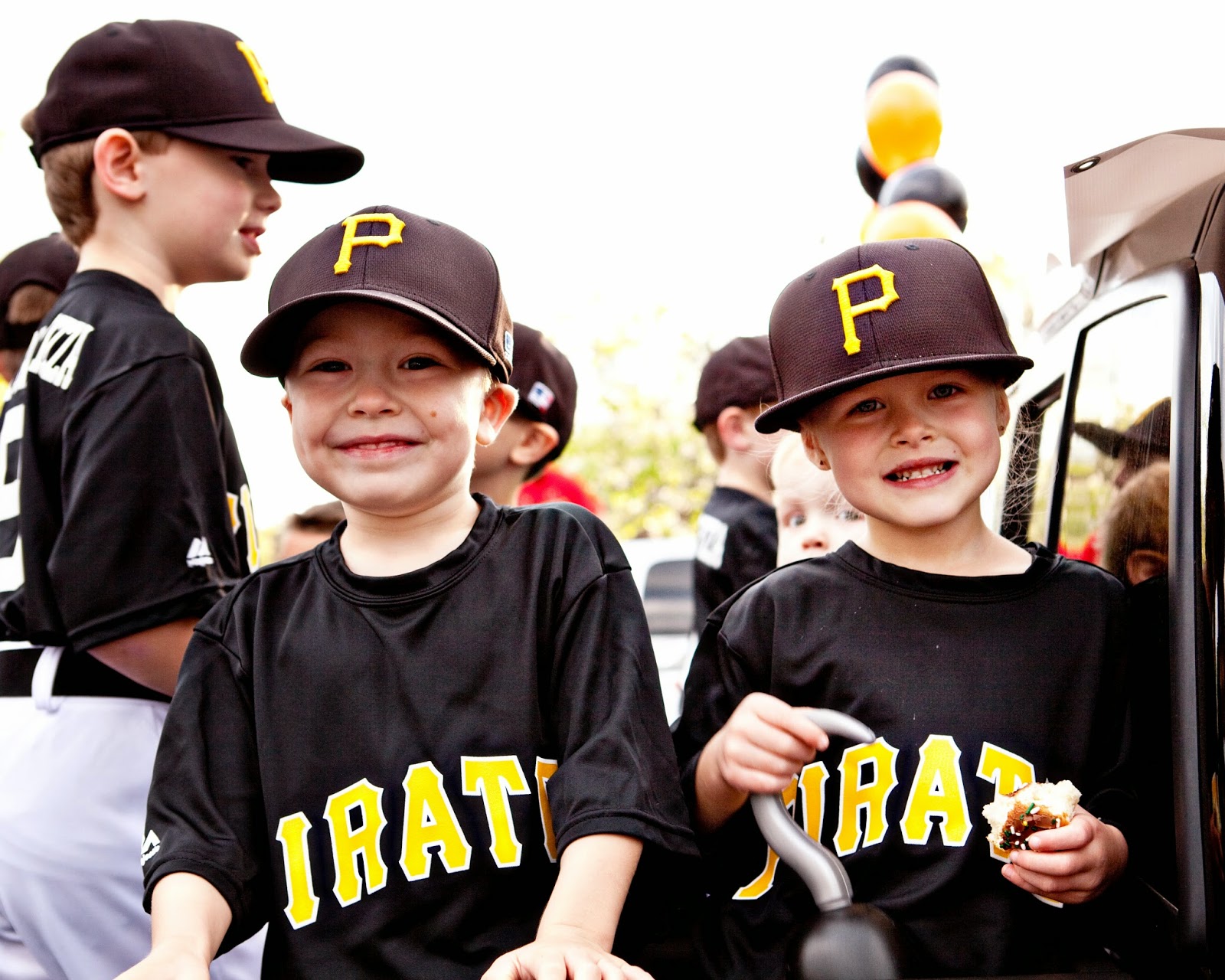 Our town sure does things right: fire trucks, police cars, people lining the streets -- all just to cheer on a bunch of cute kids who are starting baseball season.  It was awesome. 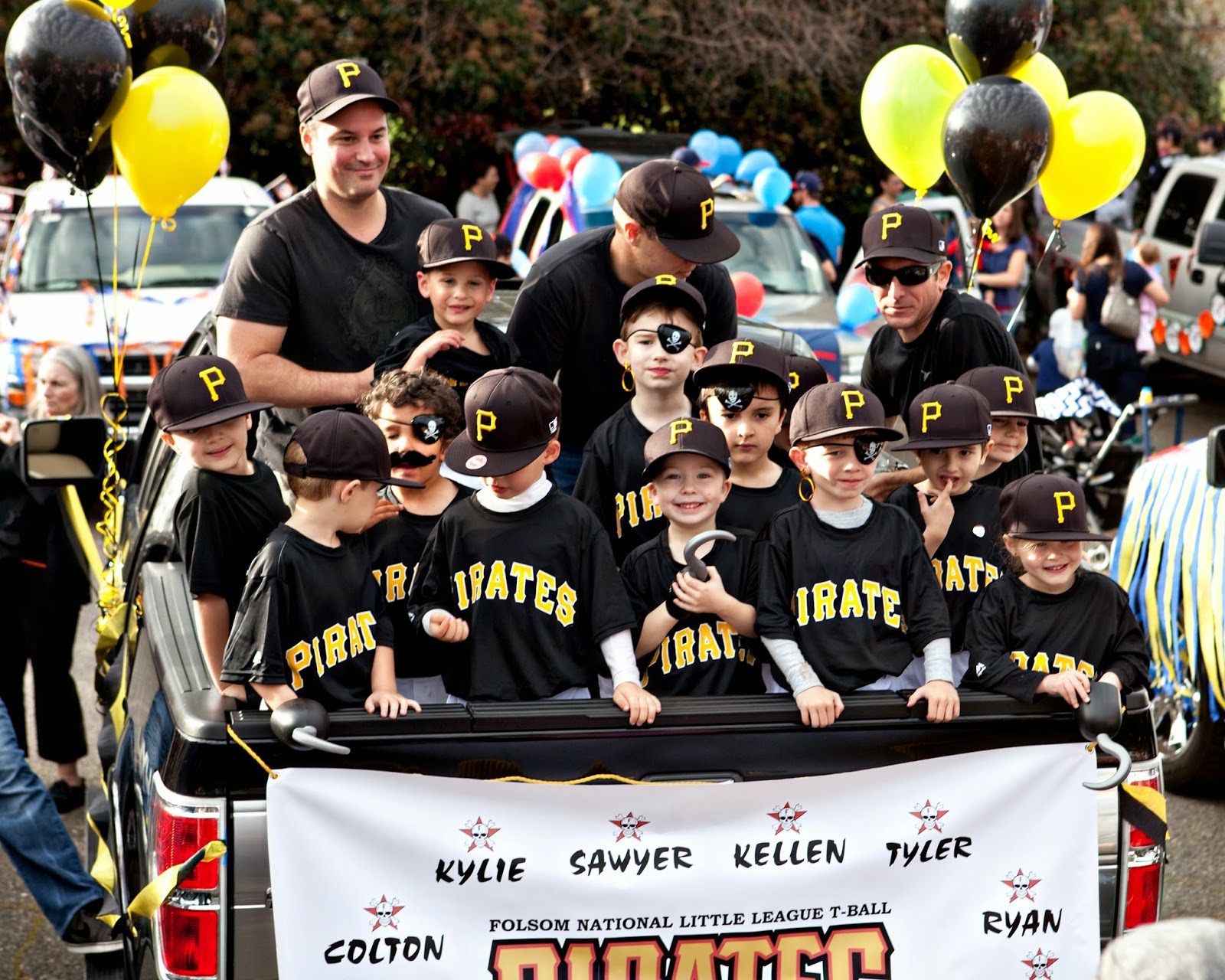 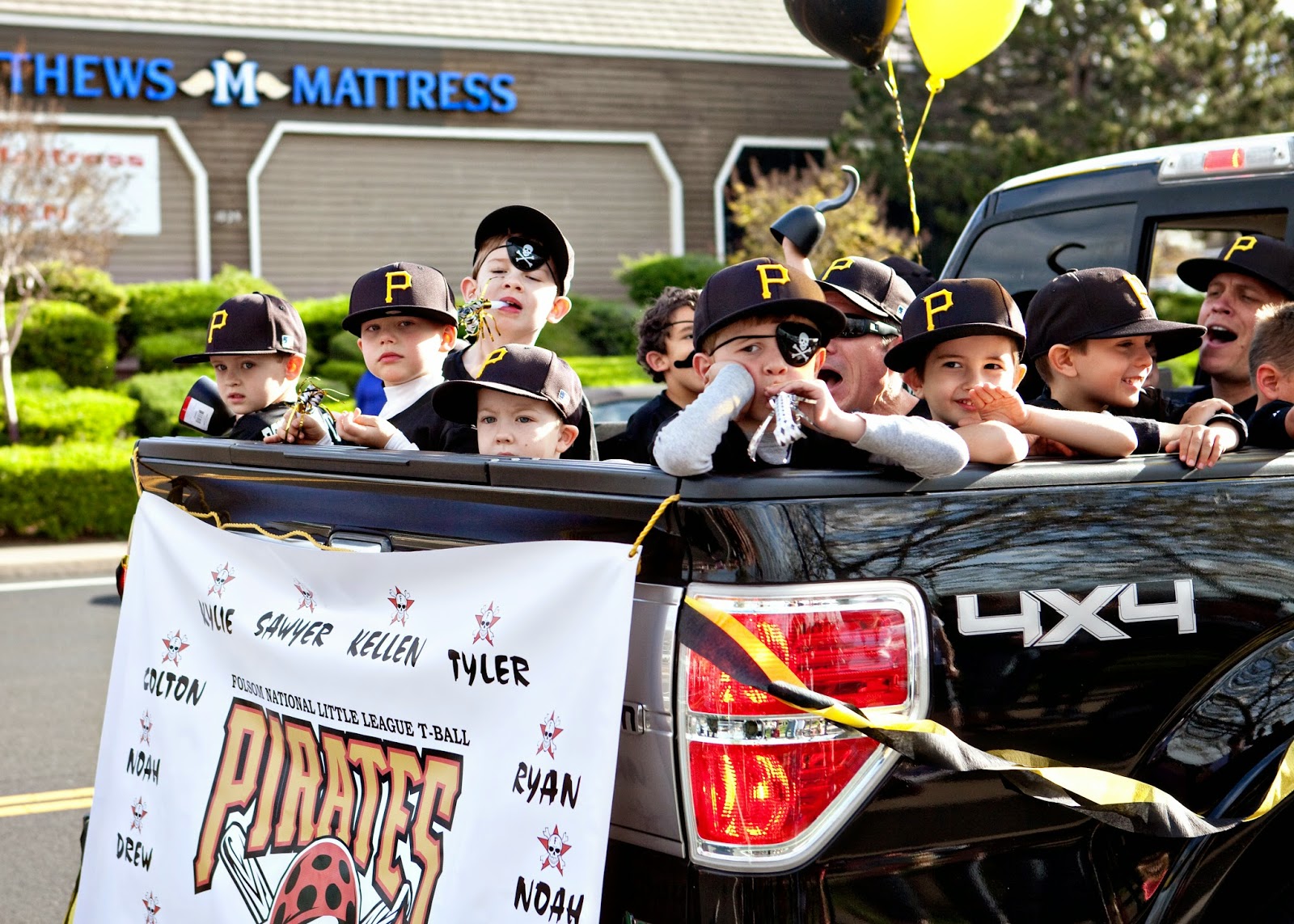 All of the teams were announced and brought on the field and, after some announcements, the kids were told to "Play ball!"

Luke would have given just about anything to get out there and be a Pirate too.  But he settled for his own 'uniform' shirt and cheered Noah on. 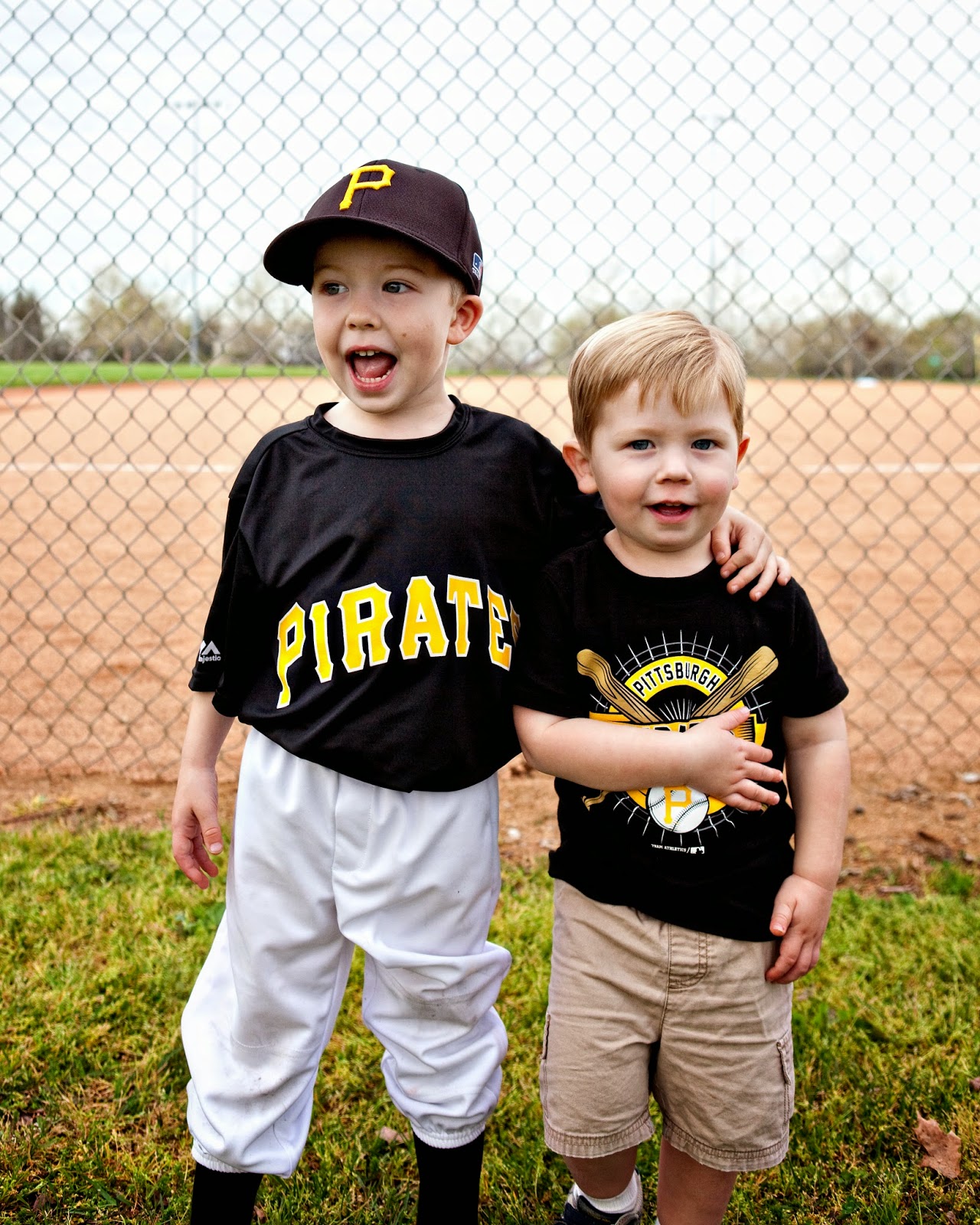 We came back to the park a few hours later for Noah's game.  It was HOT.  Oh, March, why have you already turned into June?  But this little boy didn't let the heat get to him too much. 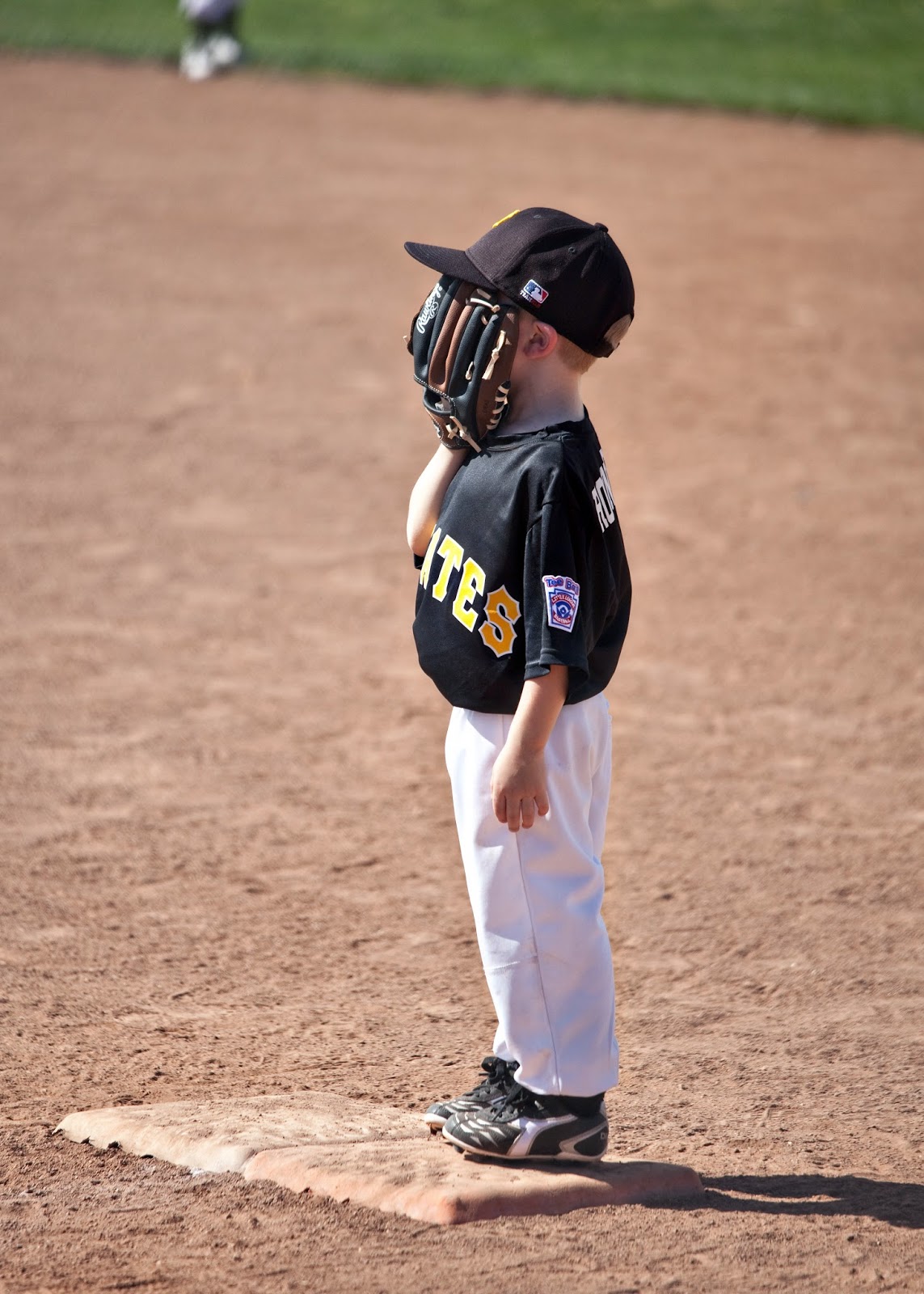 My favorite part of the game was when Noah played first base.  He talked to every kid from the other team when they got on base.  Oh, I wish I had a microphone to hear what he was talking about.  One time I saw him look at the back of a kid's jersey and then the boy did the same to him.  It must have been something like, "Hey, you're number 6.  Did you look at my shirt? I'm number 3."  It was just darling to see Noah chat with every kid and not be the least bit shy. 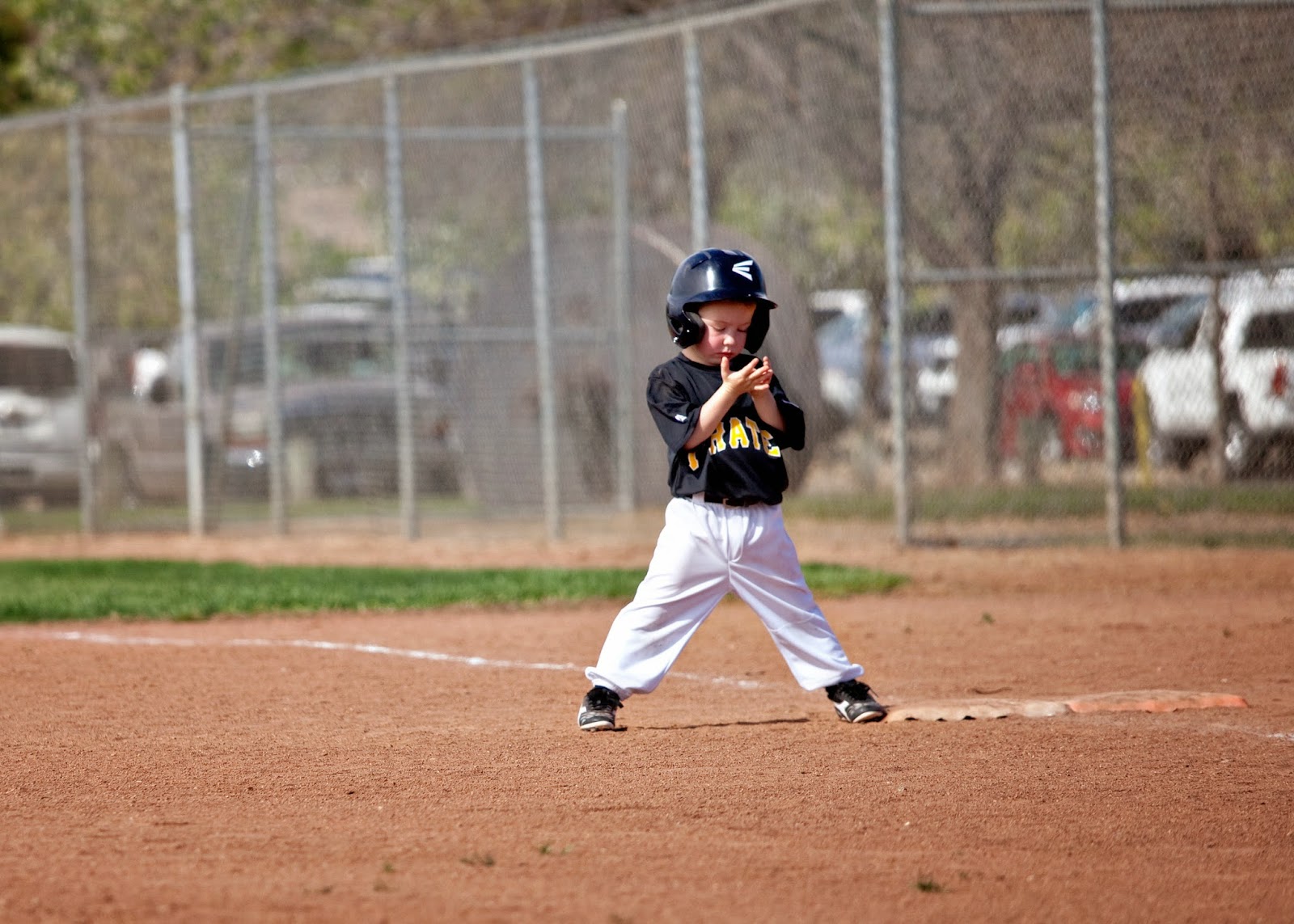 I love the focus he has on the ball in this picture. 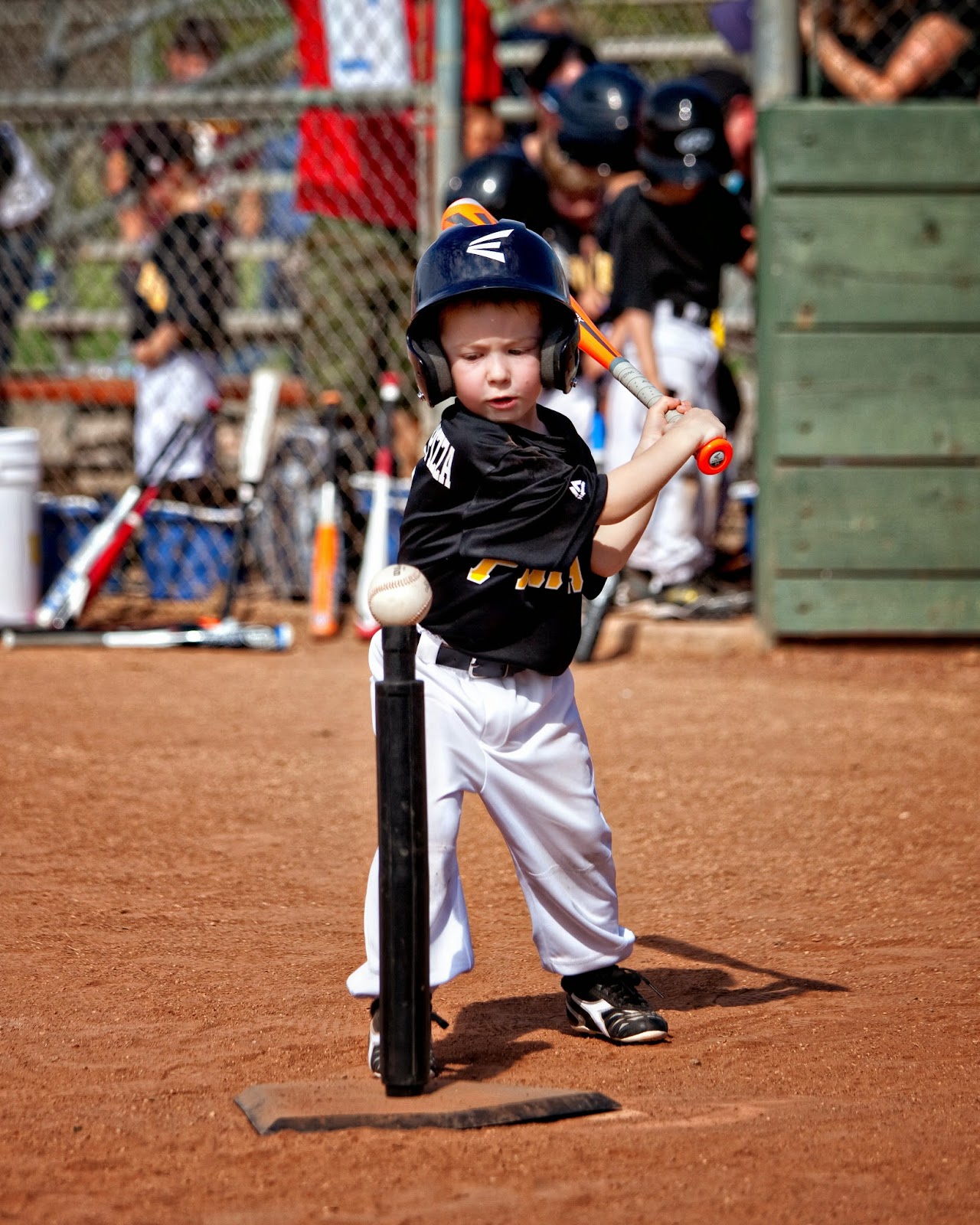 Three innings was a little long for these kids in the heat.  I loved looking out at the field and seeing Noah in ready position and two of his teammates rolling around in the grass behind him. 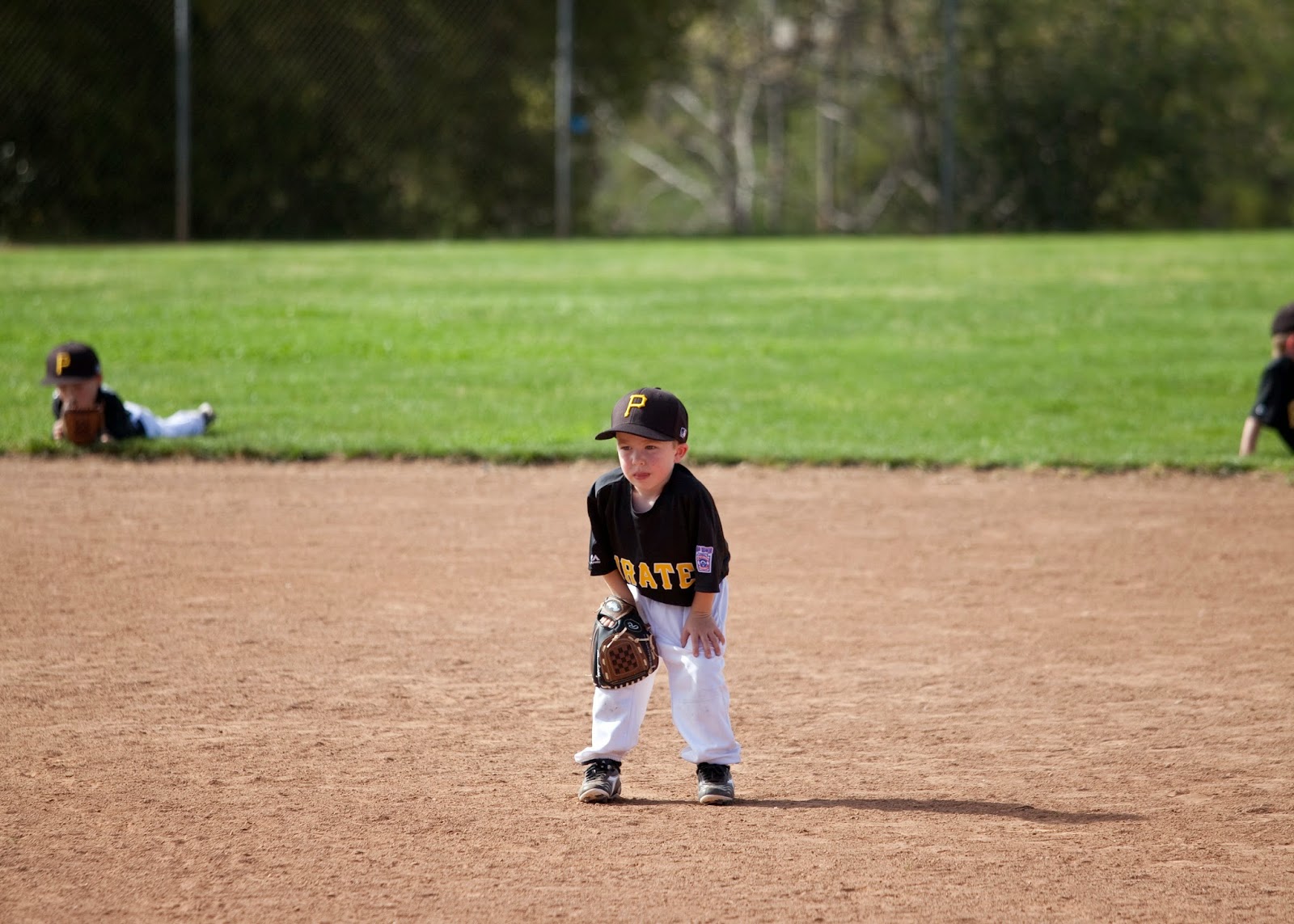 Hot weather aside, it was one memorable, fun day for our family!  After a handful of practices and two games I can already see what a great experience this season is going to be for Noah and all of us as we cheer him on.
Posted by Dianna at 8:59 PM No comments: