We were taken in to meet Mickey in small groups.  Our family was the last of the group, so we got our own little private time with him.  The staff at Mickey's house was awesome.  They let Noah have his moment, and we didn't feel rushed at all.  After big hugs, Noah rubbed noses with Mickey and then just didn't want to let him go. 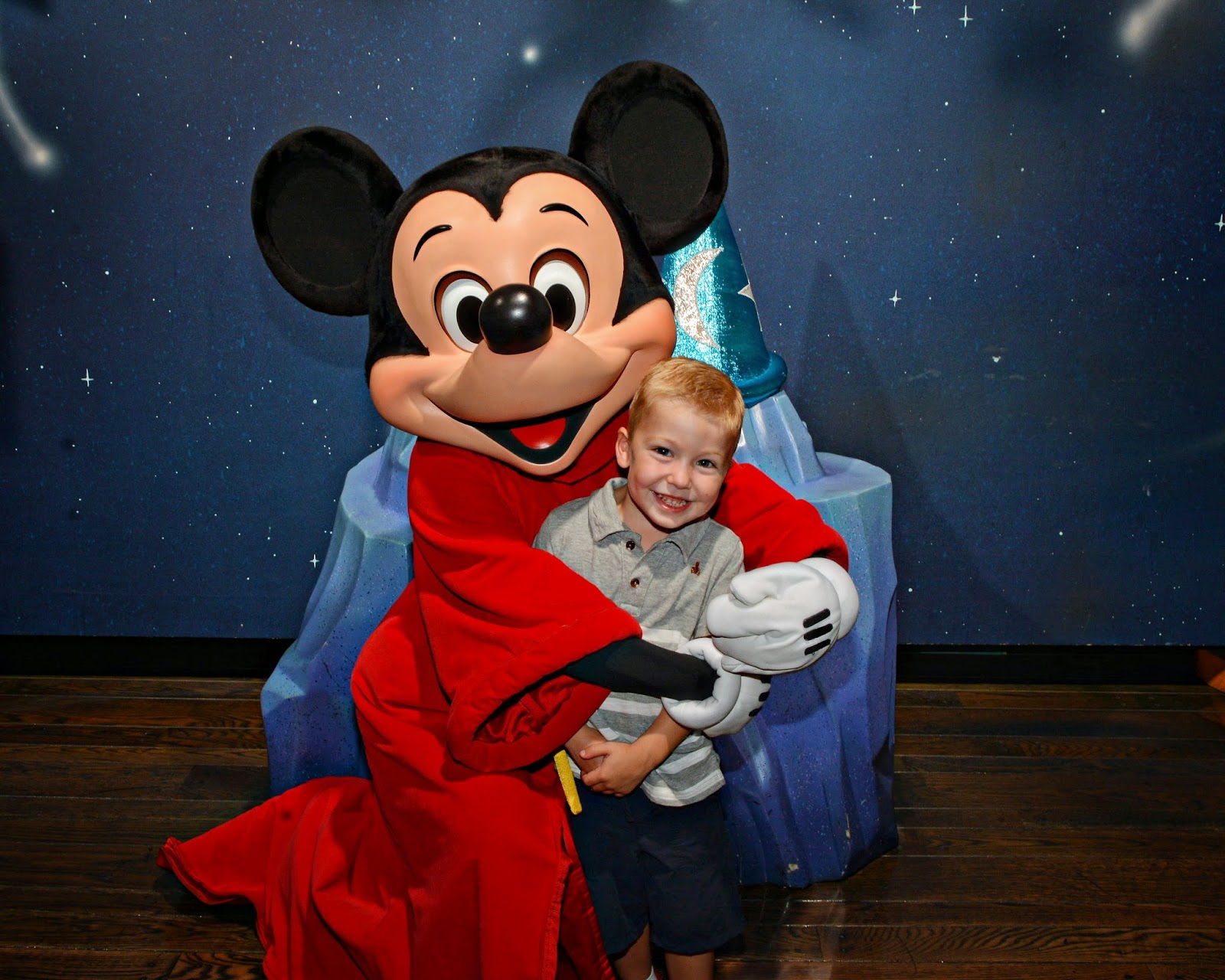 Mickey gave a good effort for Luke.  He tried waving and playing peek-a-boo, but Luke just couldn't be convinced to go see Mickey on his own.  Once I held Luke he was happy to be closer and get to know Mr. Mouse.

Grandma took a pretty cute picture with Mickey too! 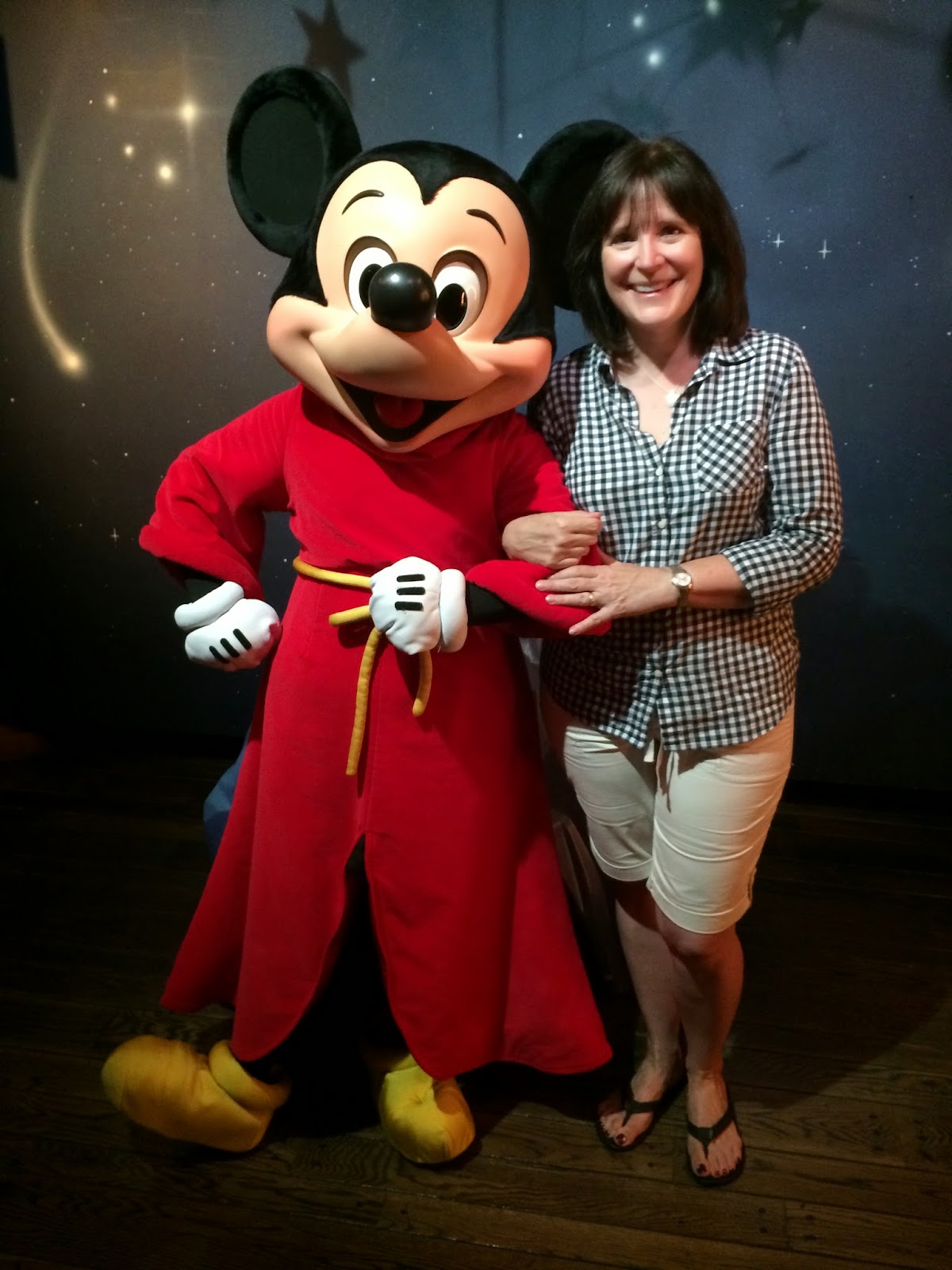 We saw Minnie from a distance, but that line was equally long, and Noah was totally content after meeting Mickey.  Next time.

Pluto was also hanging out in Toon Town, so Noah waited a few minutes to meet him as well. 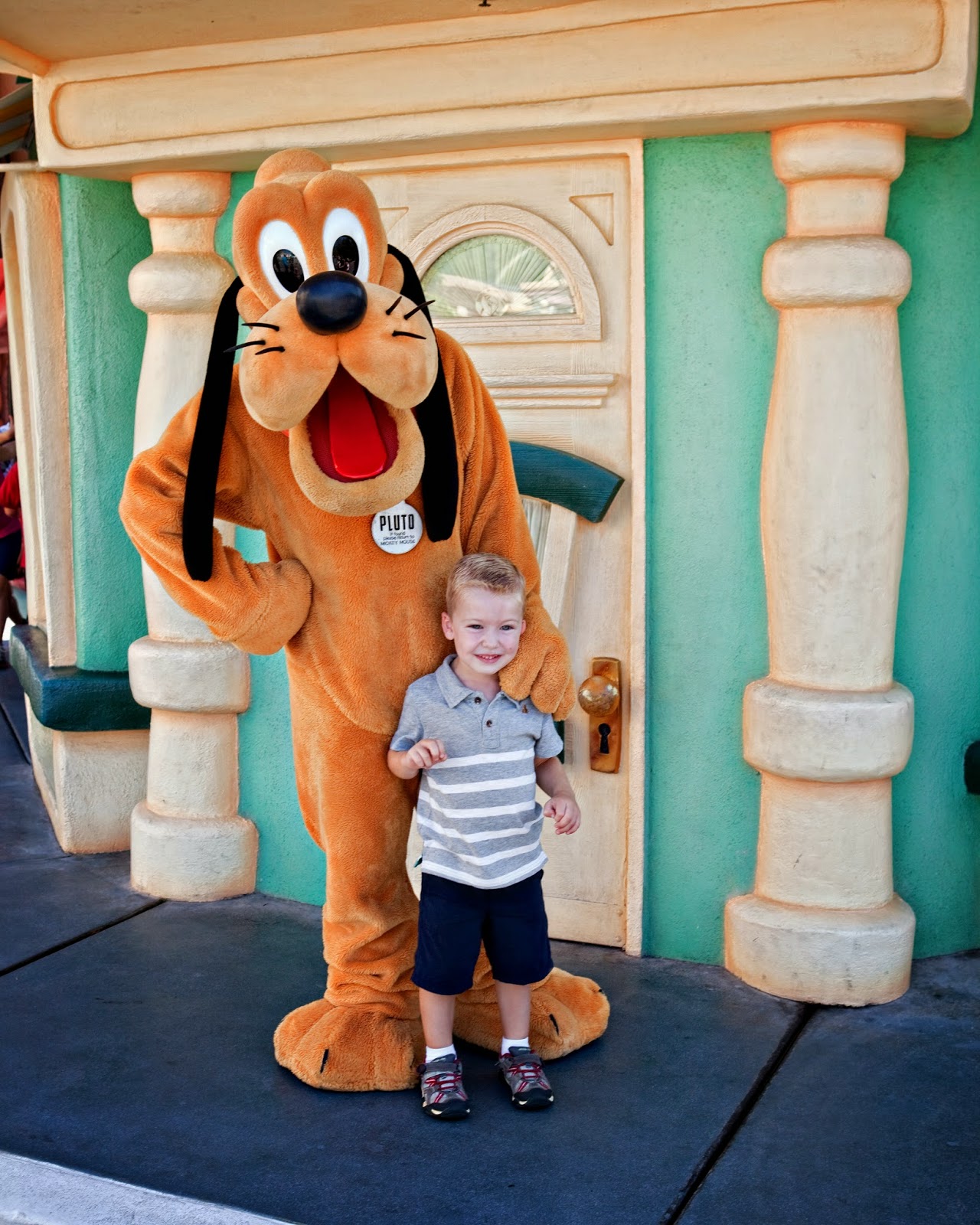 This is another one of my most favorites. 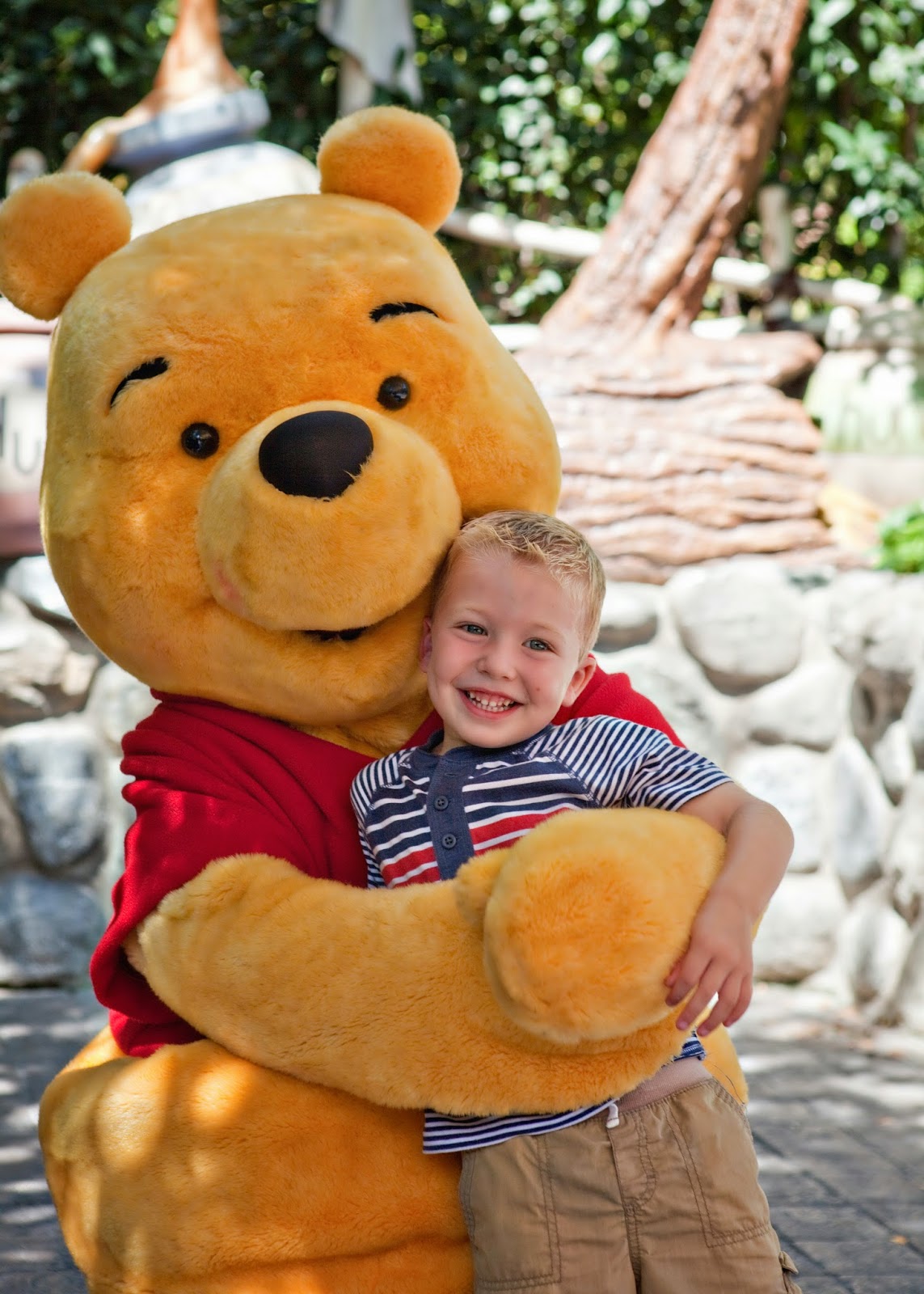 Noah found his happy place with Winnie the Pooh.  He just didn't want to let go. 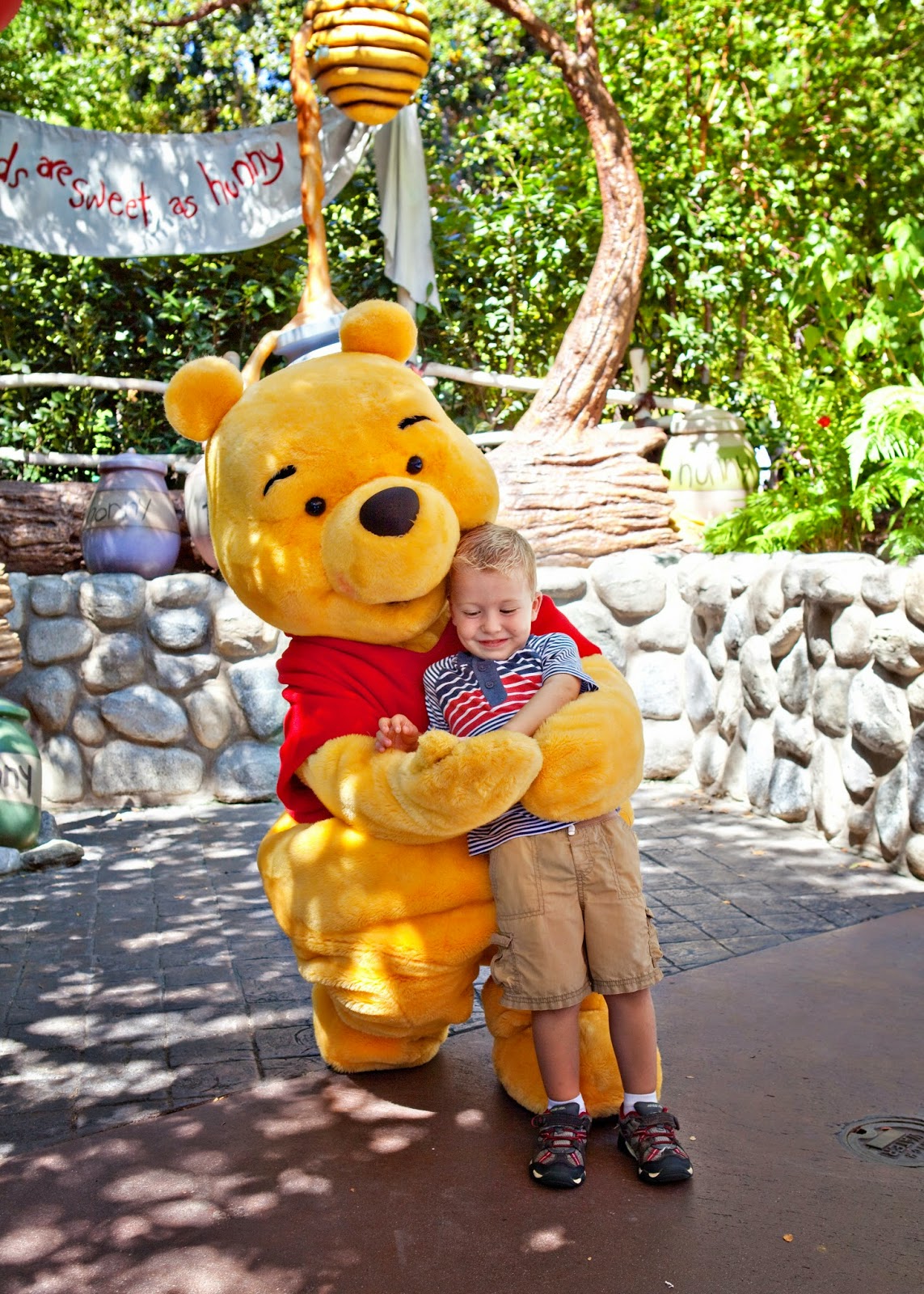 The worker there could see how connected Noah wanted to be with Pooh and said, "Winnie the Pooh likes honey.  Do you like honey?"  And Noah excitedly responded, "I like honey too!"  So Winnie the Pooh went back to his pretend honey pots, scooped out some honey, and pretended to share it with Noah.  It was maybe the most darling thing ever.  I wanted to hug that Pooh Bear myself for giving us all such a sweet memory.

Tigger was fun too, especially when Noah told him, "I like to bounce just like you."  They bounced and bounced together in circles, and Noah giggled through the whole thing. 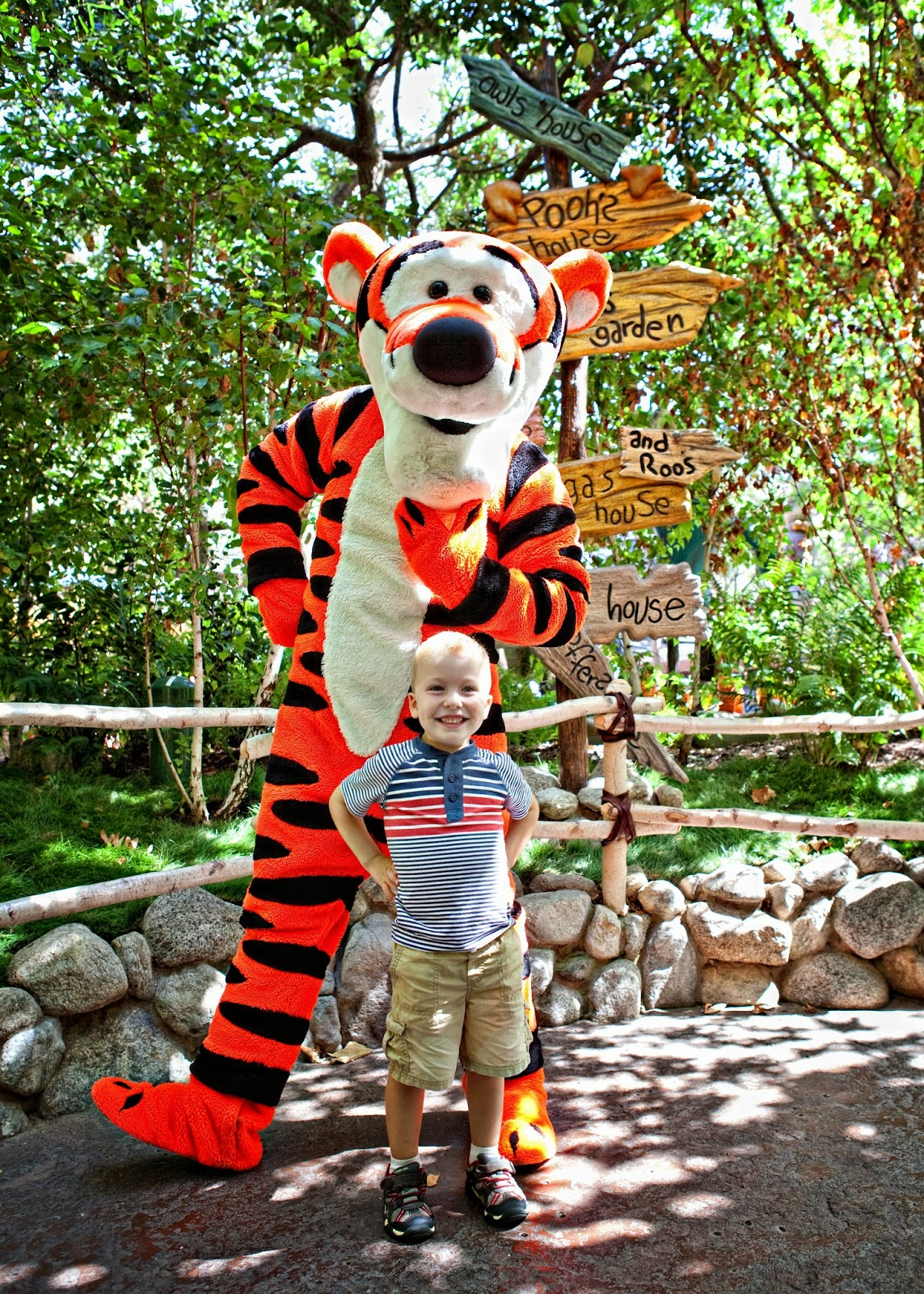 It all really was just too cute, and left us with some priceless memories.  Next time Luke's going to love it too, right?

We caught up with a storm trooper who was a bit aloof and totally serious. 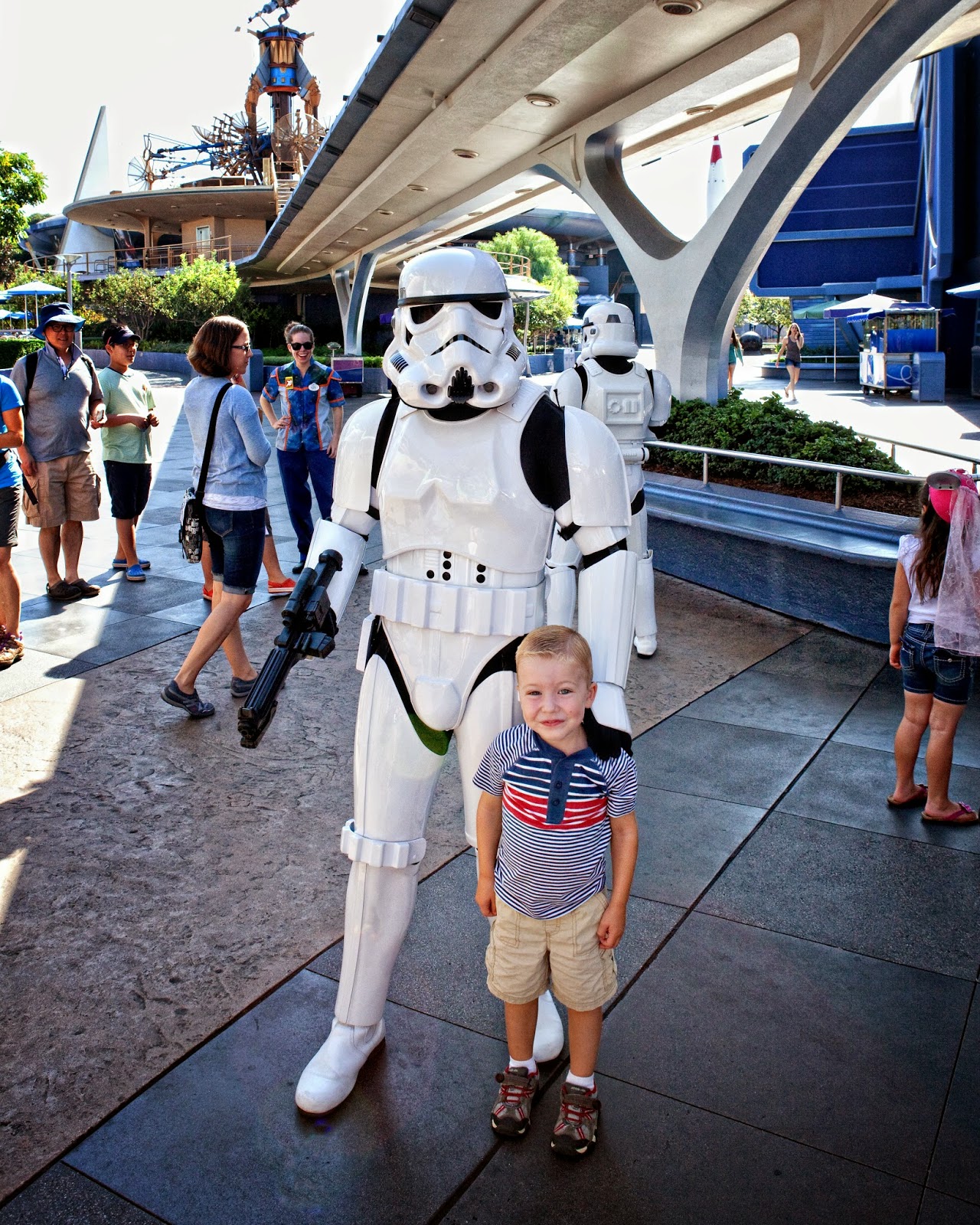 But I guess he's playing the part and isn't exactly going to start bouncing like Tigger.  Noah thought he was very cool.

Chip and Dale were hanging out on Main Street so we stopped to say hi. 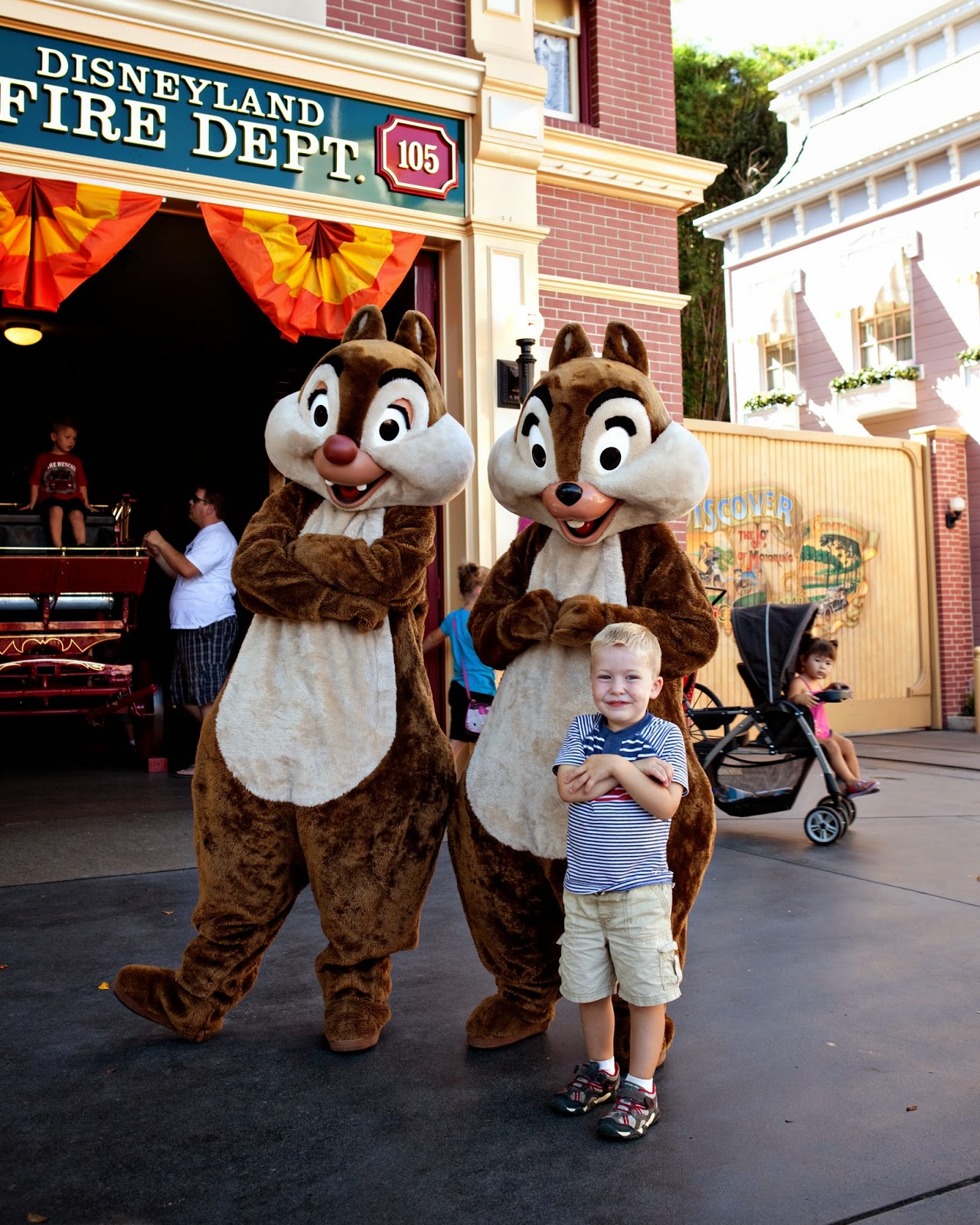 I think we've only read one book that they are in, so Noah hardly knows who they even are. 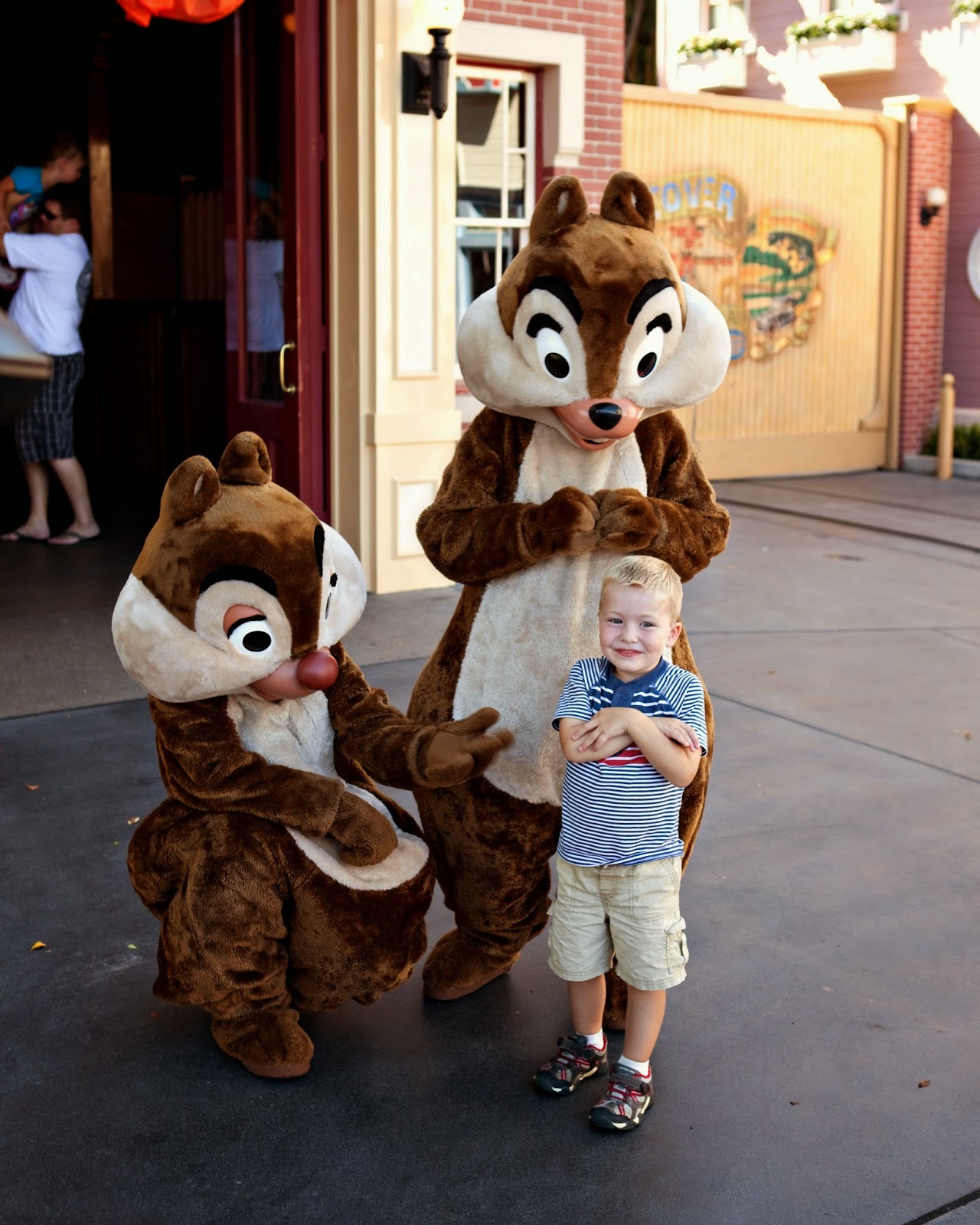 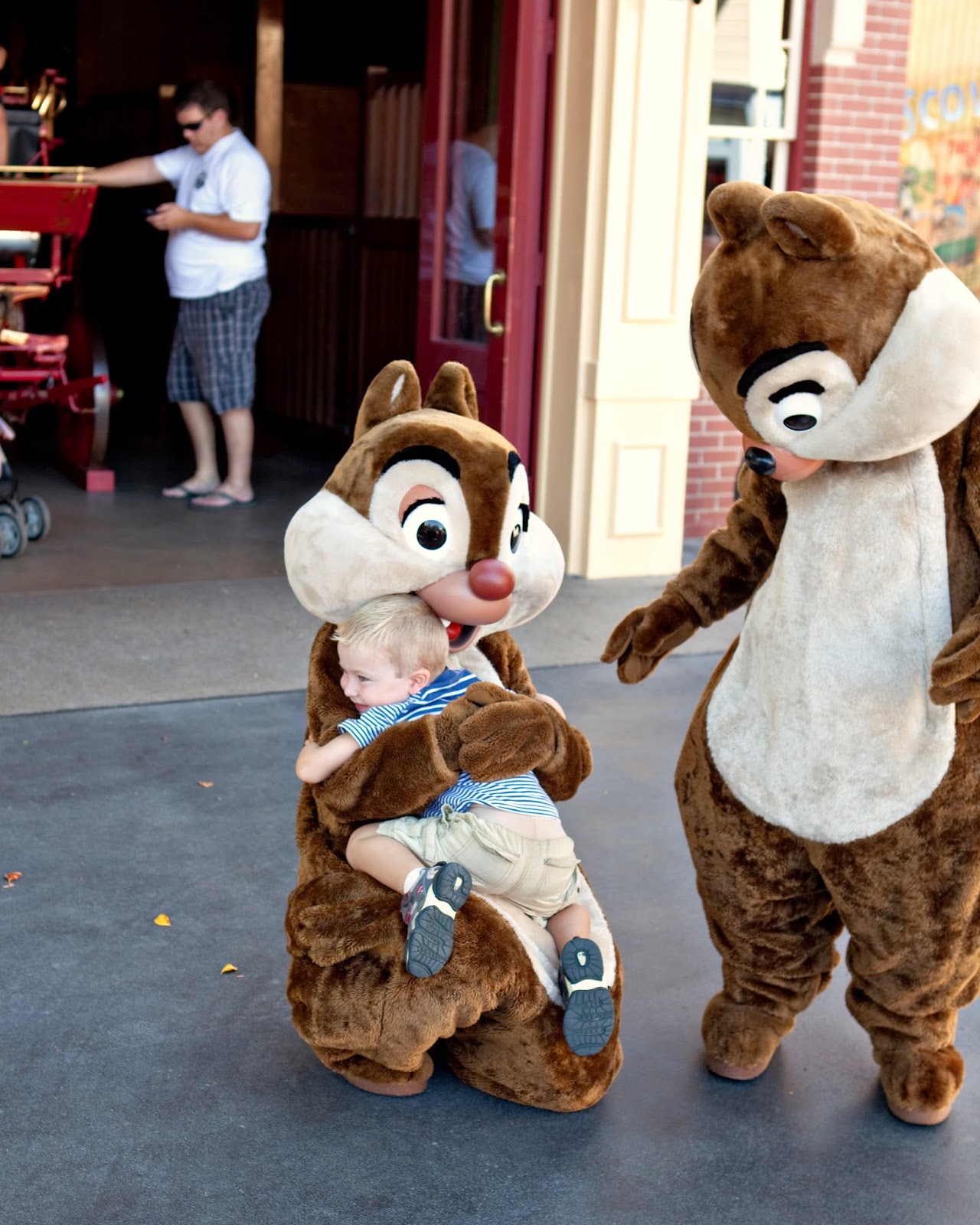 Chip let Noah know he was feeling a little left out, so Noah was sure to share the love a little. 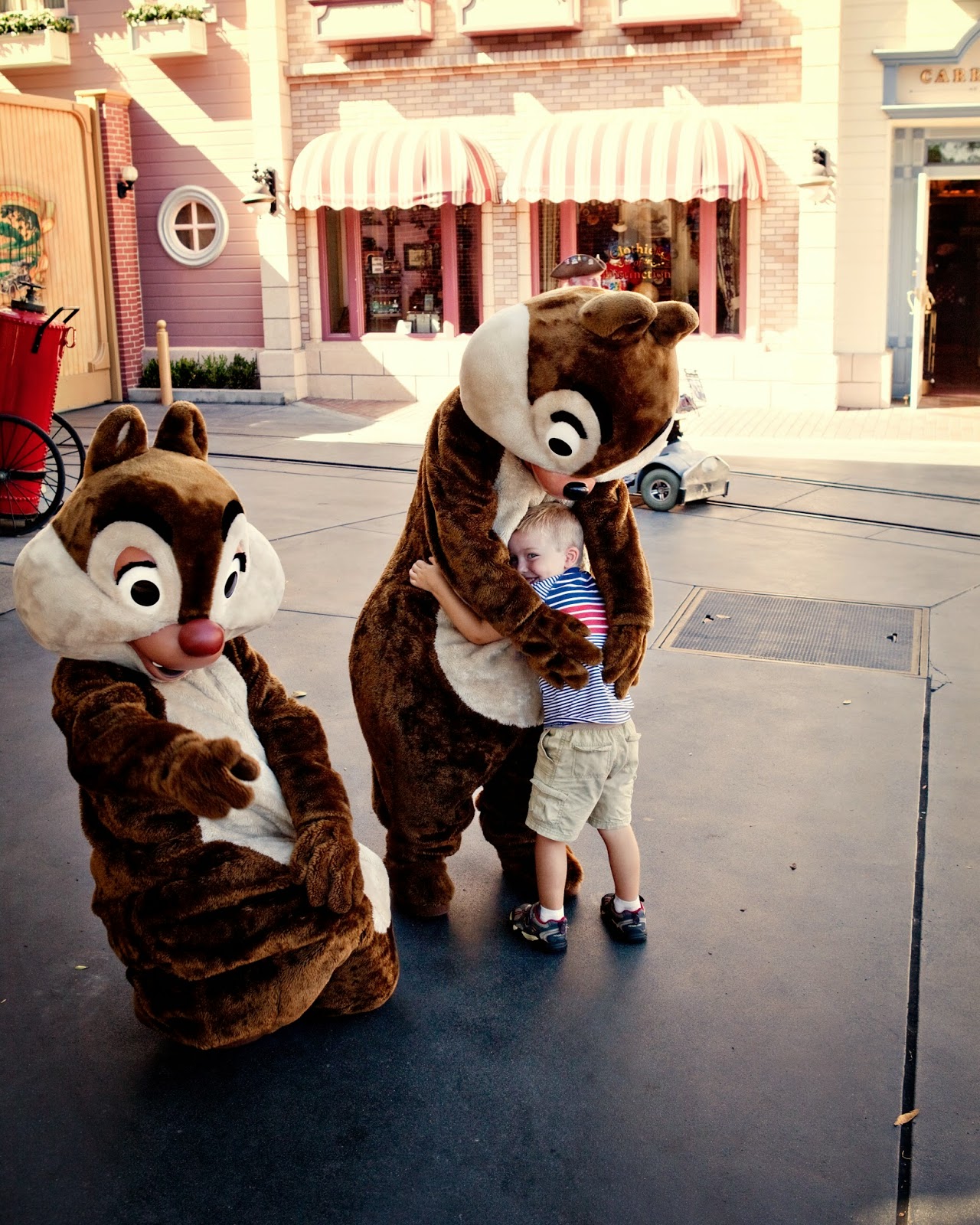 We didn't make finding characters, other than Mickey, a huge priority, but instead just kind of took advantage of the opportunity if it was there.  I'm sure we could have met others had we tried harder.  This time around it was fun to just see what happened and who we could come across.  The character interactions were definitely one of my most favorite parts of the trip.  To see Noah's eyes sparkle with excitement as he met each character is a memory I'll hold on to for a long time.  Thank you Disney!
Posted by Dianna at 8:59 PM