We had packed in so much the first two days that I wasn't really too disappointed that Wednesday was our last day.  That said, I was in no way antsy to leave and certainly would have enjoyed a few more days of the 'magic.'

It became apparent, though, some time around one o'clock on that last day that our boys were exhausted and quite possibly just could not soak in another day of fun had they had the option.   This guy especially, needed someone to declare and end to all of it so he could get some real sleep in a real bed when nap time rolled around. 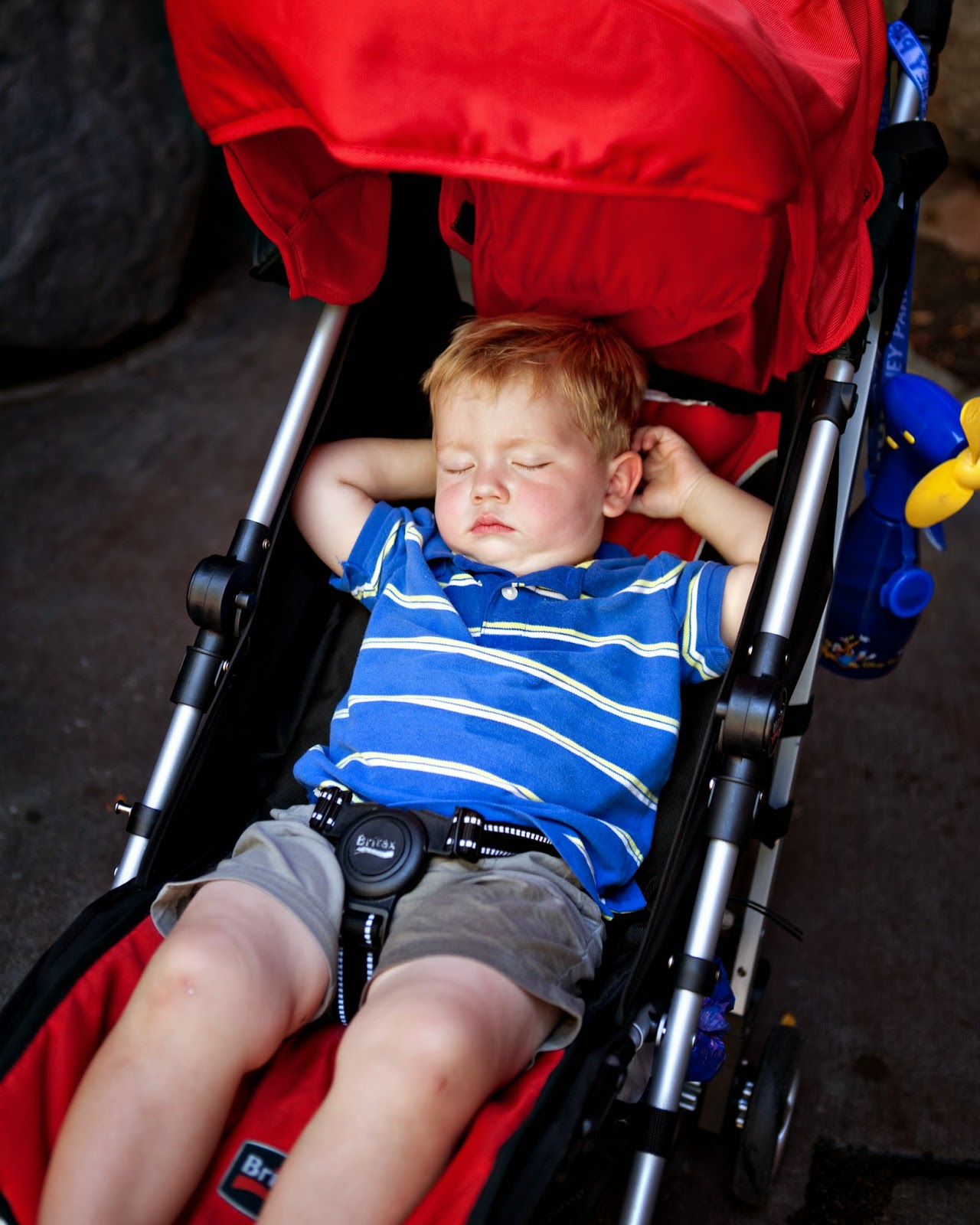 Three days for this little family was perfect this time around. 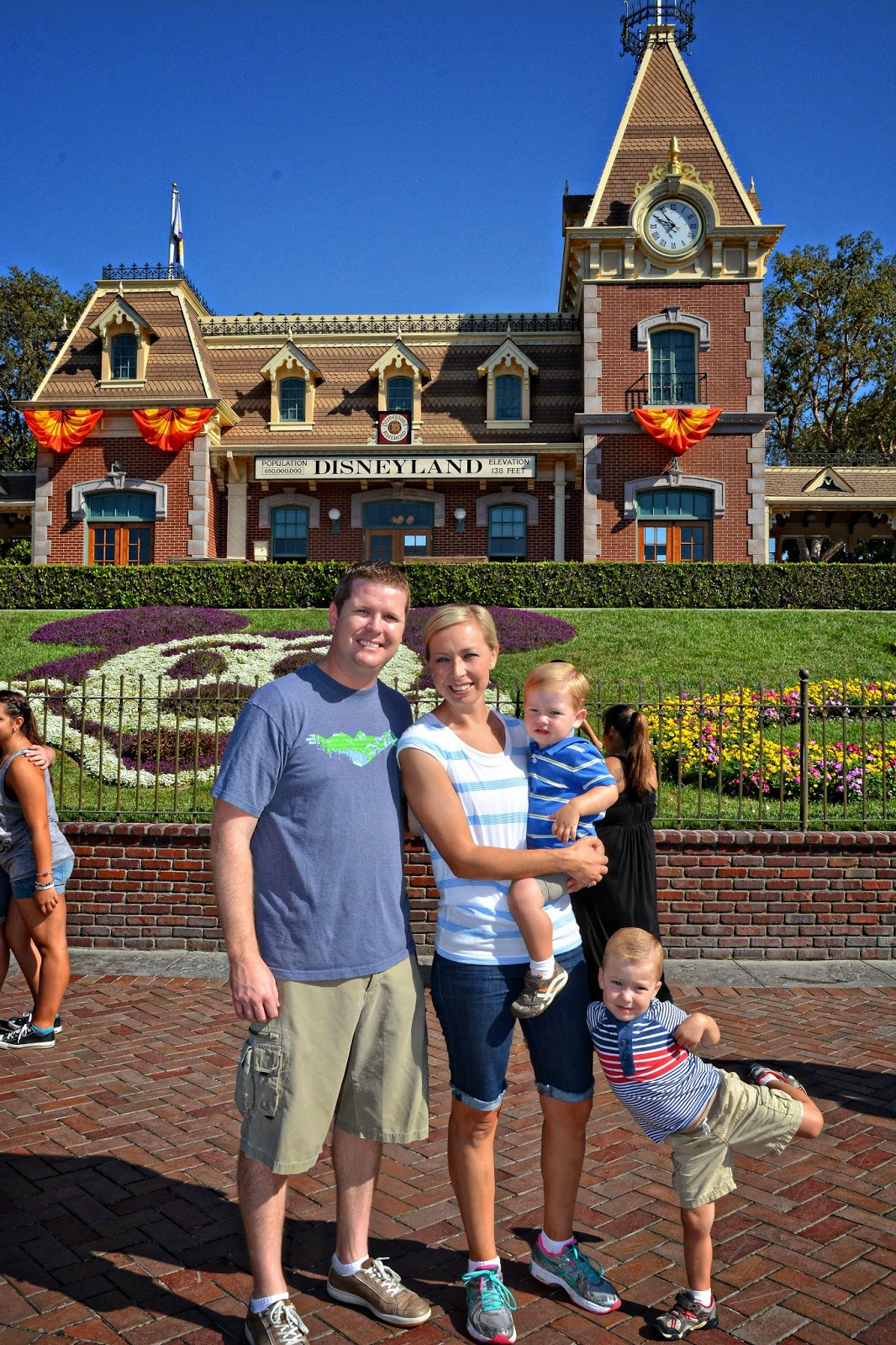 The day started in Tomorrowland.  When you ask Luke what his favorite ride was as Disneyland he almost always says "da wockets." 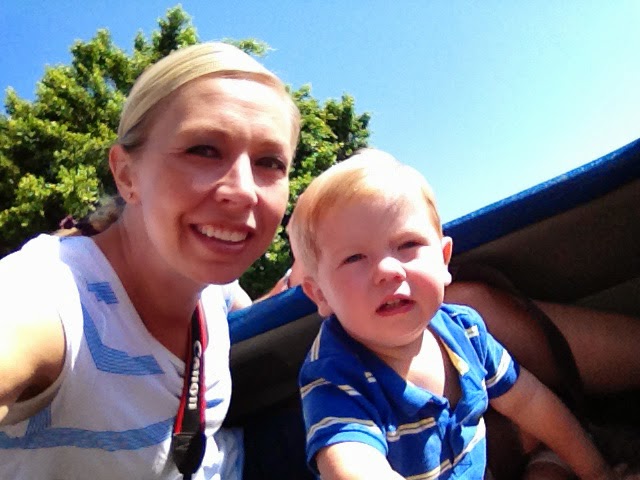 He really liked that Astro Orbiter and had one of his biggest fits getting off of it.  We all had a great time on Buzz Lightyear's Astro Blasters. 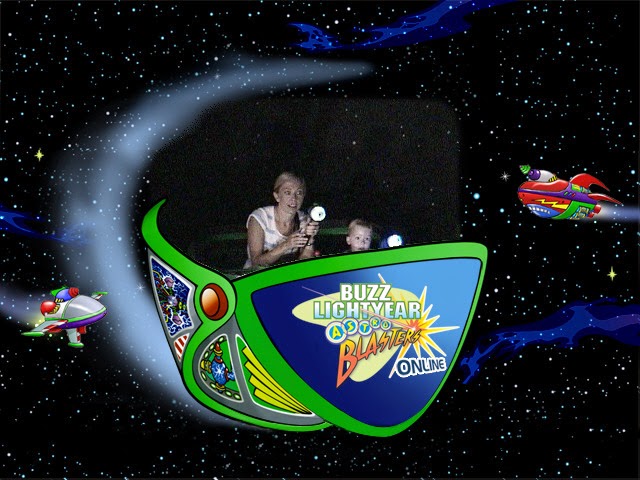 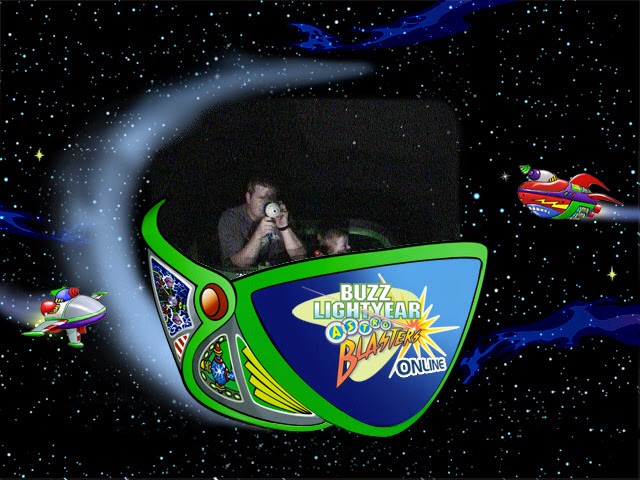 Noah still talks about shooting at all of the "Z's."

We finished off Tomorrowland with Autopia and Star Tours. 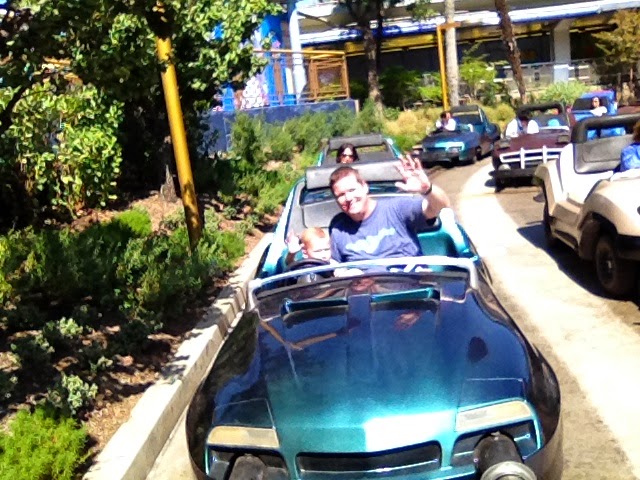 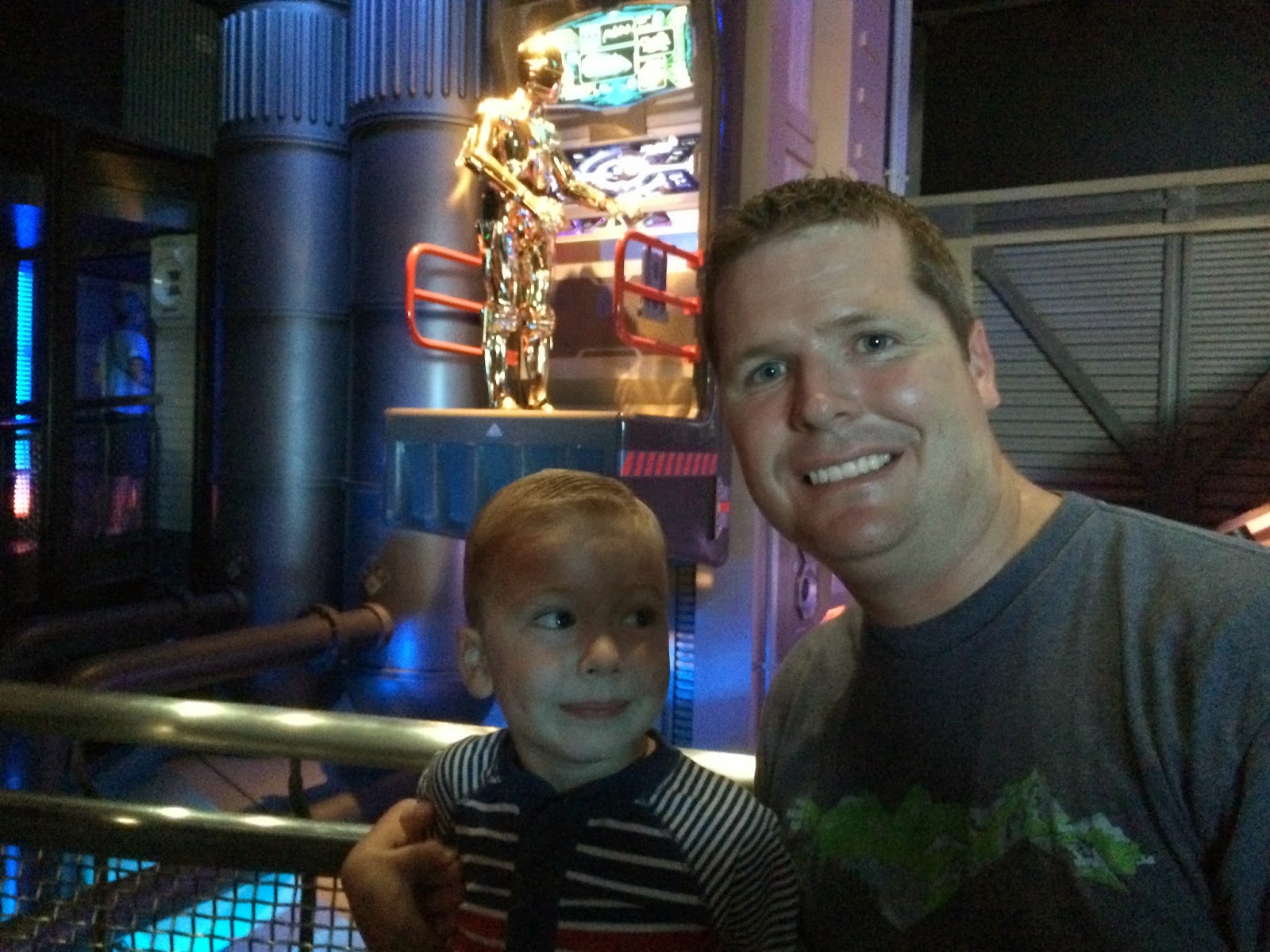 Space Mountain was closed, so we'll save that for our next visit.

On our way to the other side of the park, Luke took another ride on the tea cups, we made a brief stop in the Mad Hatter's store, 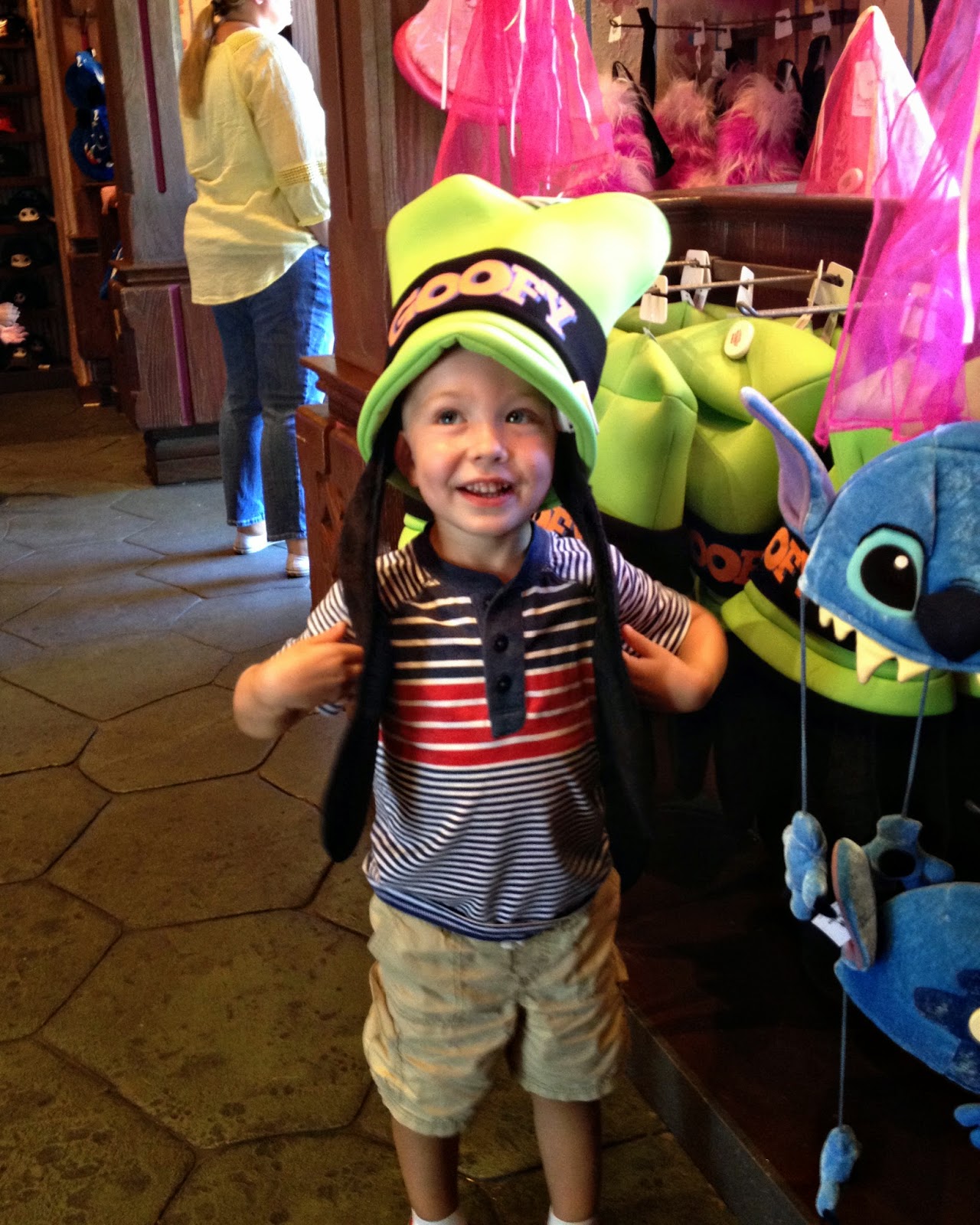 and then took a ride on the Casey Jr. Train. 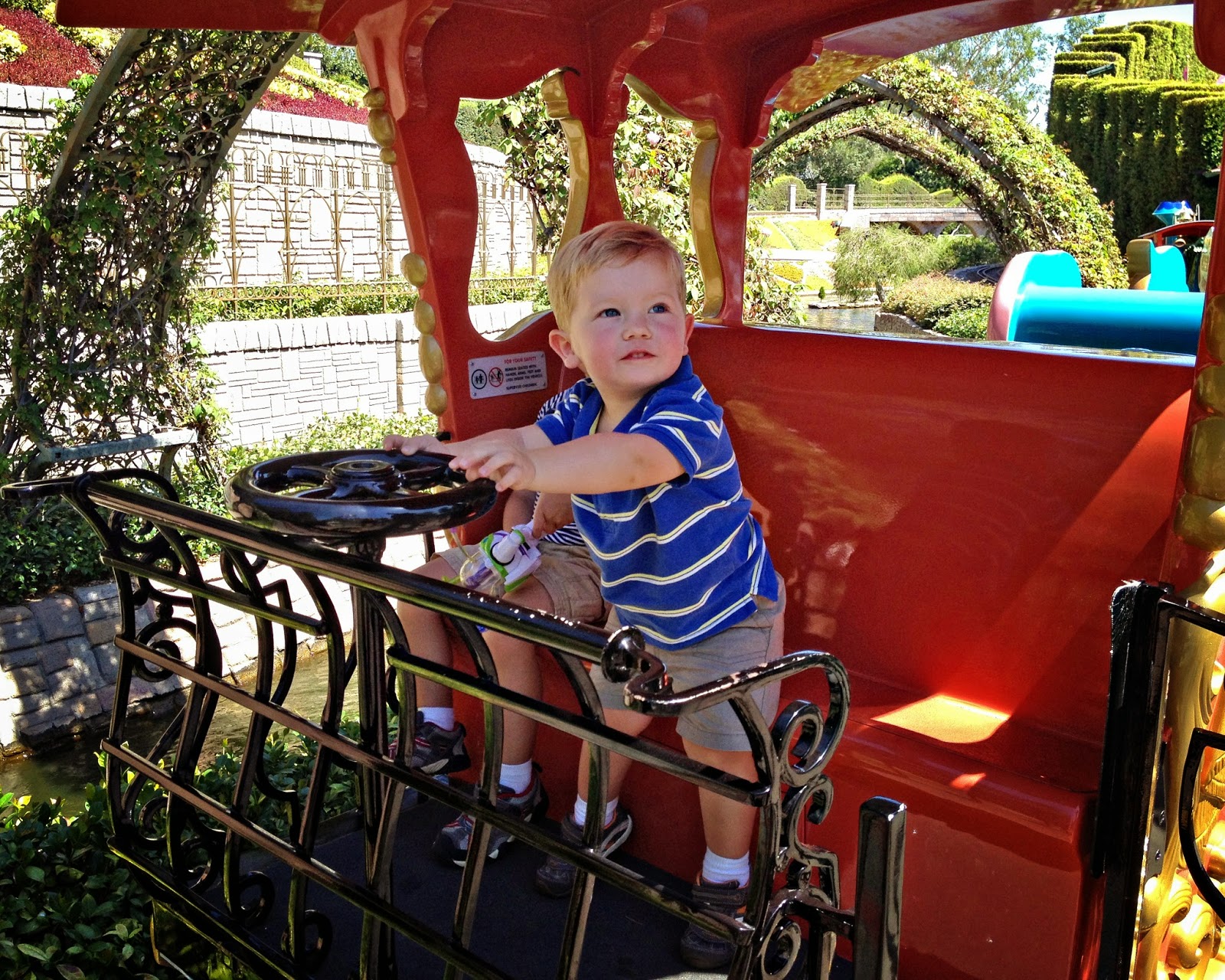 The boys loved sitting in the caboose. 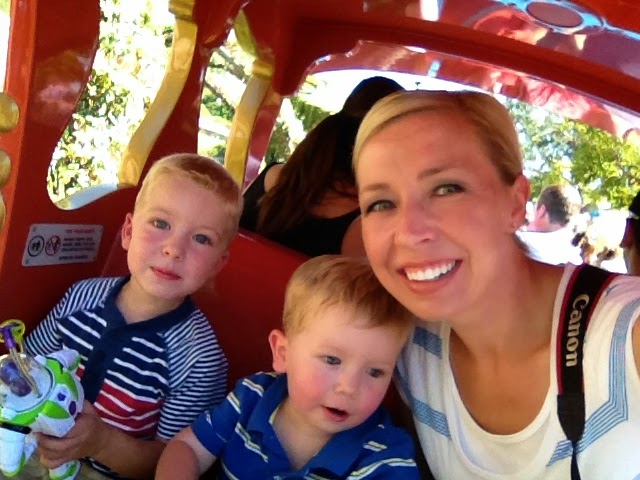 At that point we had almost done everything in the park, so it became a matter of revisiting our favorites.  So, off to Pirates, Thunder Mountain Railroad and Splash Mountain we went.  Between having Fast Passes and using the Rider Switch Passes, Noah didn't get much experience with the long Disneyland lines, which was fine with all of us. 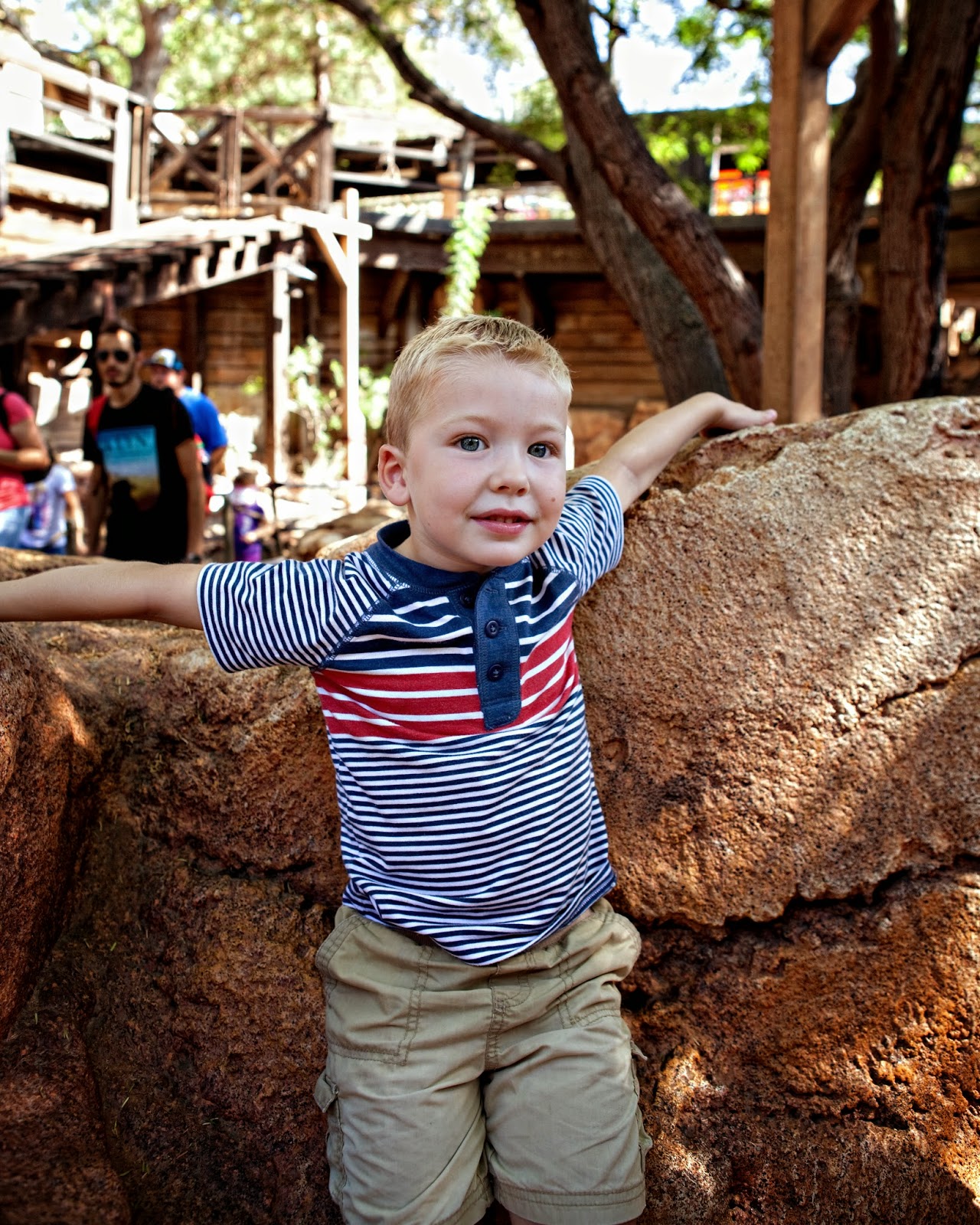 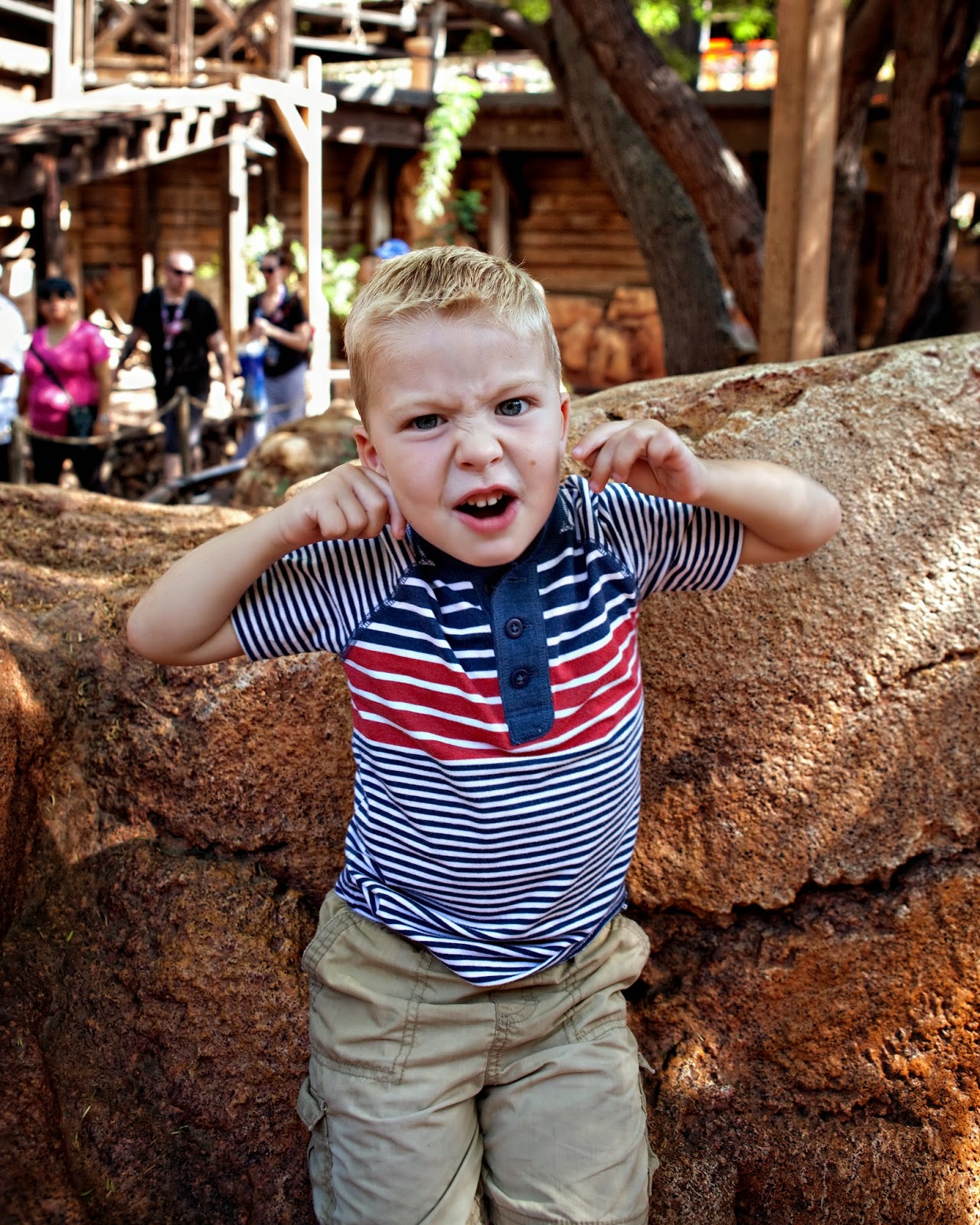 While I stayed with a sleeping Luke, Noah rode Splash Mountain twice and even sat in the front. 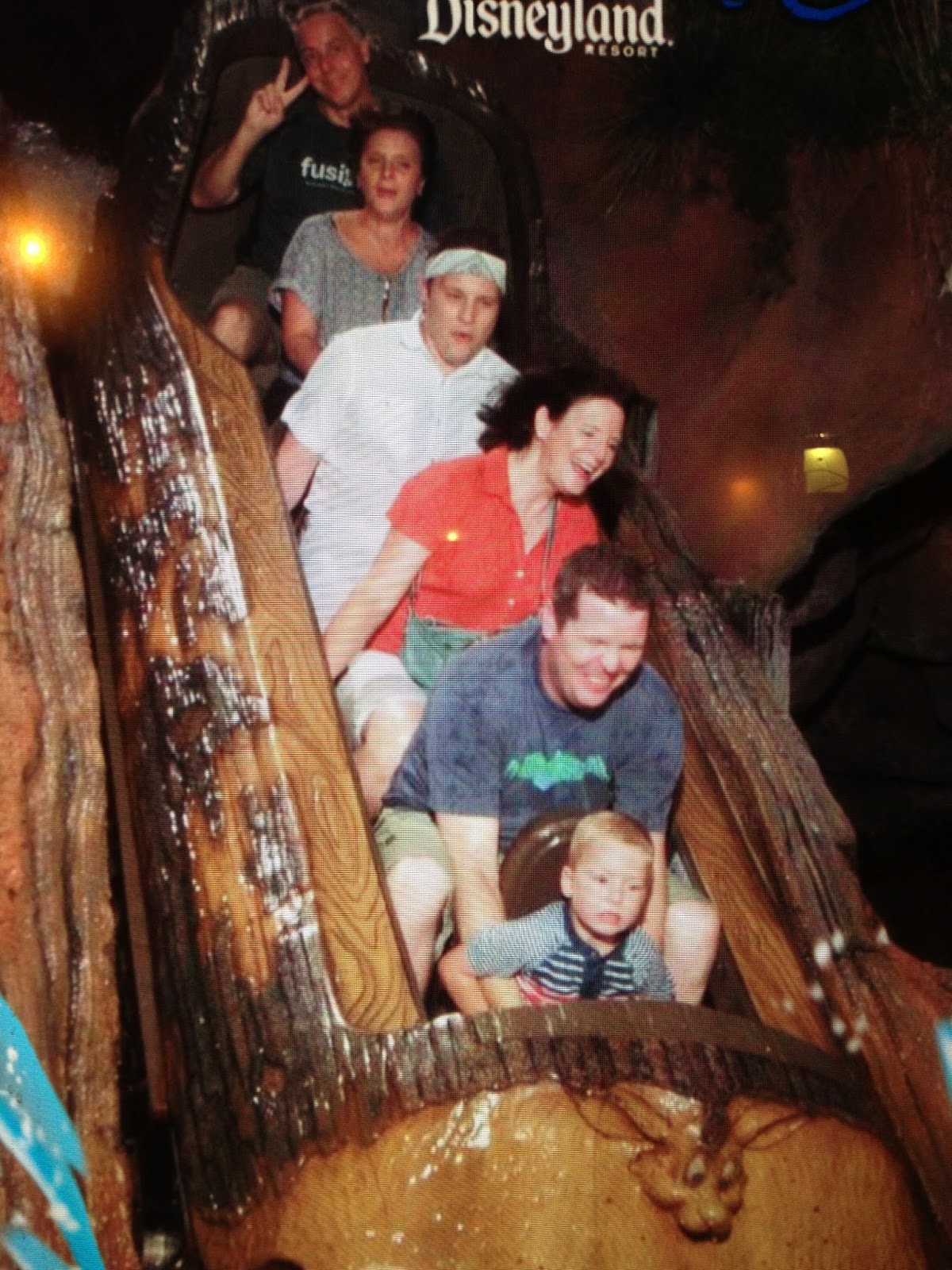 I love that brave boy, and he loved getting all wet in the front.

None of us had been on the Sailing Ship Columbia (at least not that I remember) so we took a little sail around the river. 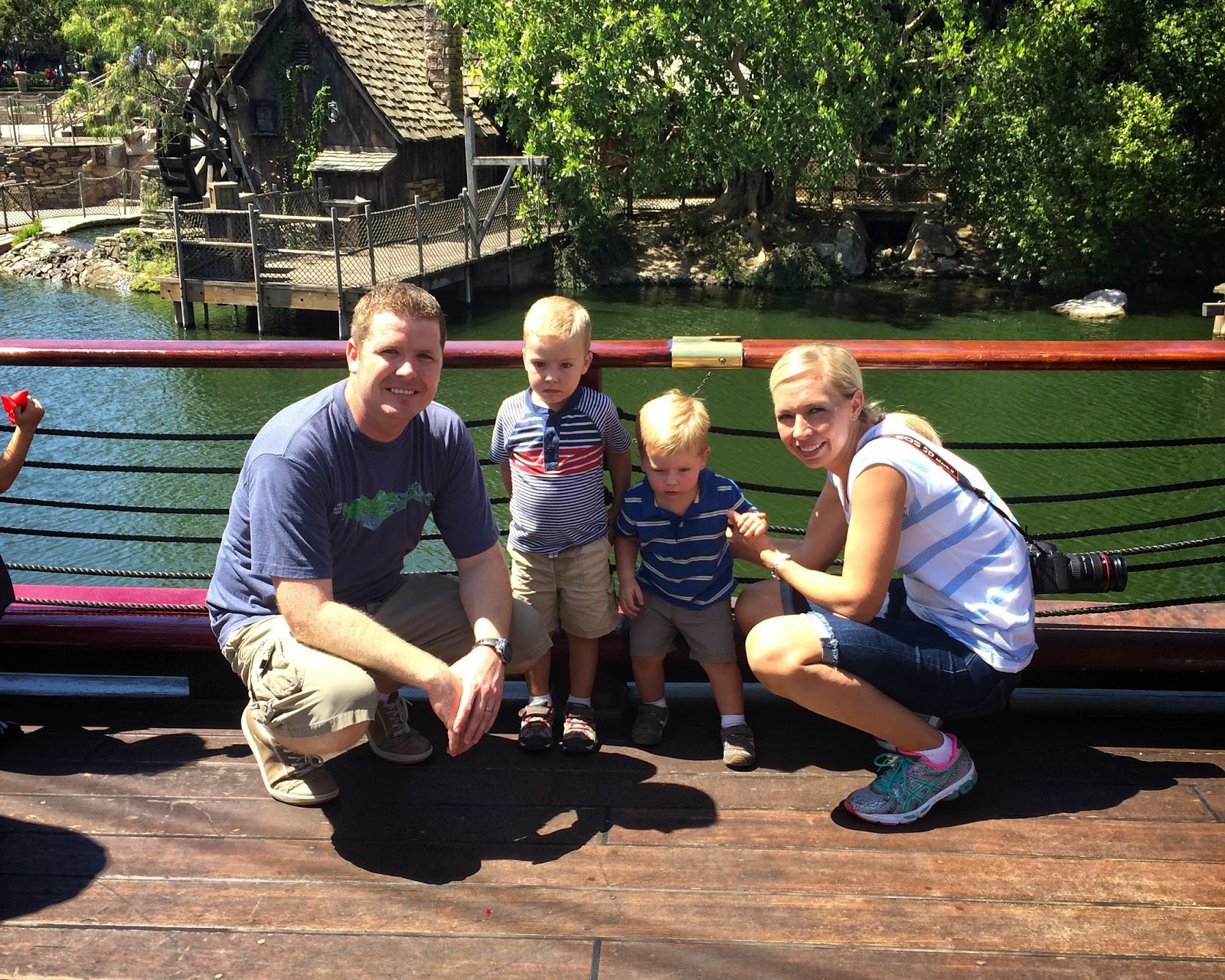 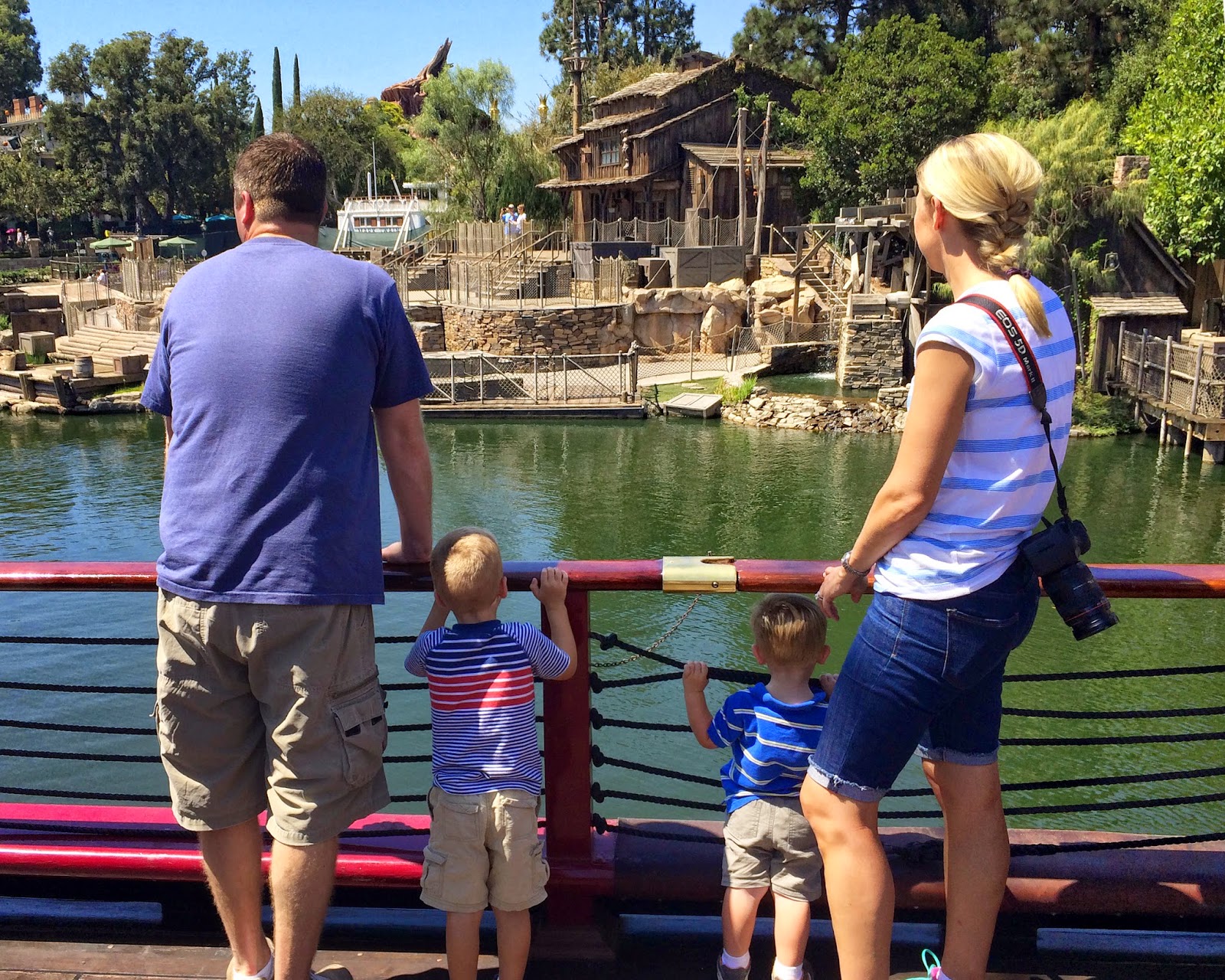 That little Luke kept trying to slip between the ropes, so we held on to him extra tight.  One year old overboard was exactly not what we needed to end our trip with.

We got a little thrown off when a bunch of rides closed down for a while.  It kind of helped us decide to put that Park Hopper Pass to work and head over to California Adventure.  We planned to end our day in Cars Land, so first up was to get Fast Passes for Radiator Springs Racers.  After that we just walked, rode more rides, and enjoyed a zero waiting time for just about everything except Toy Story. 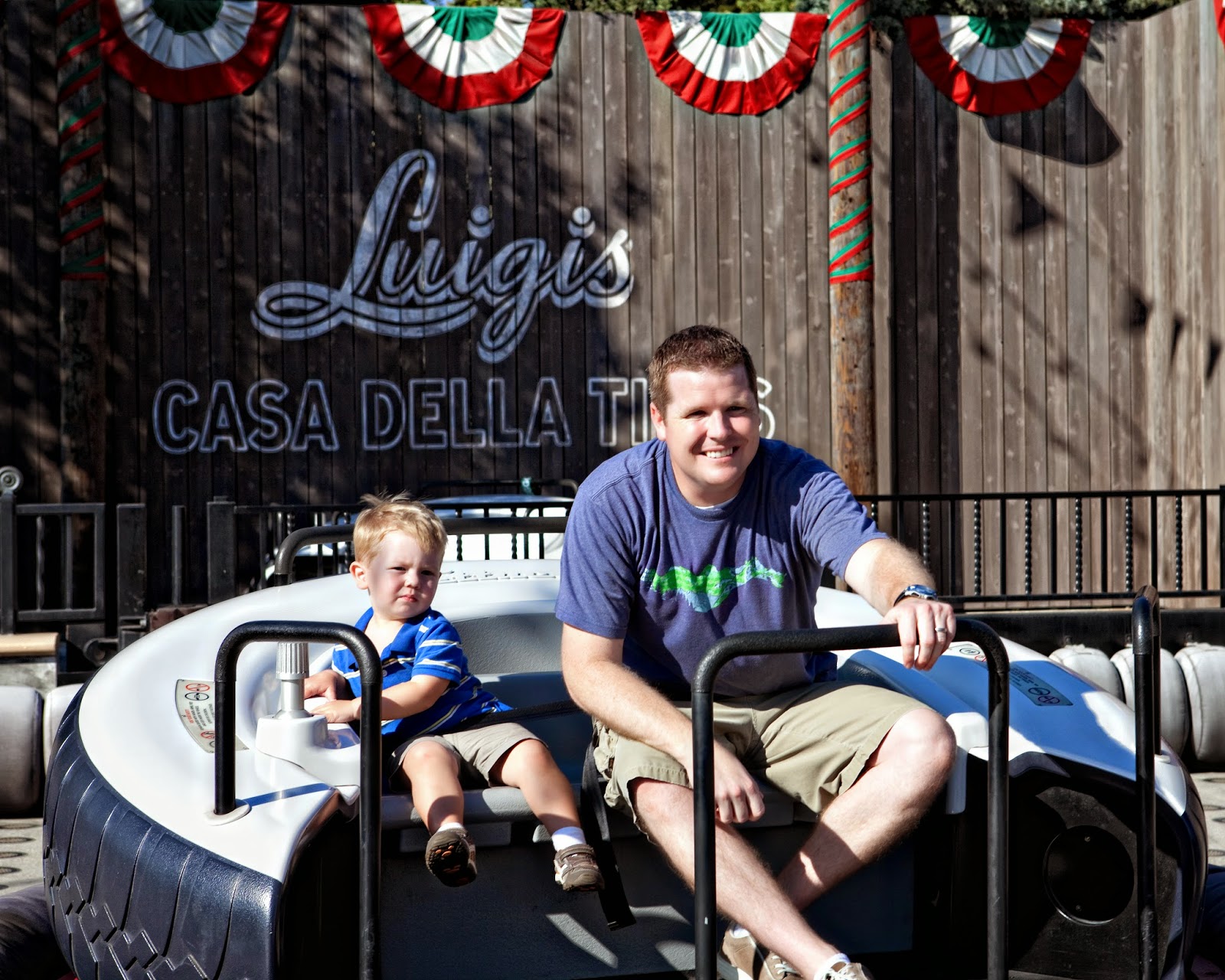 We had seen McQueen on the first night in California Adventure, but no one minded stopping by and saying hello again. 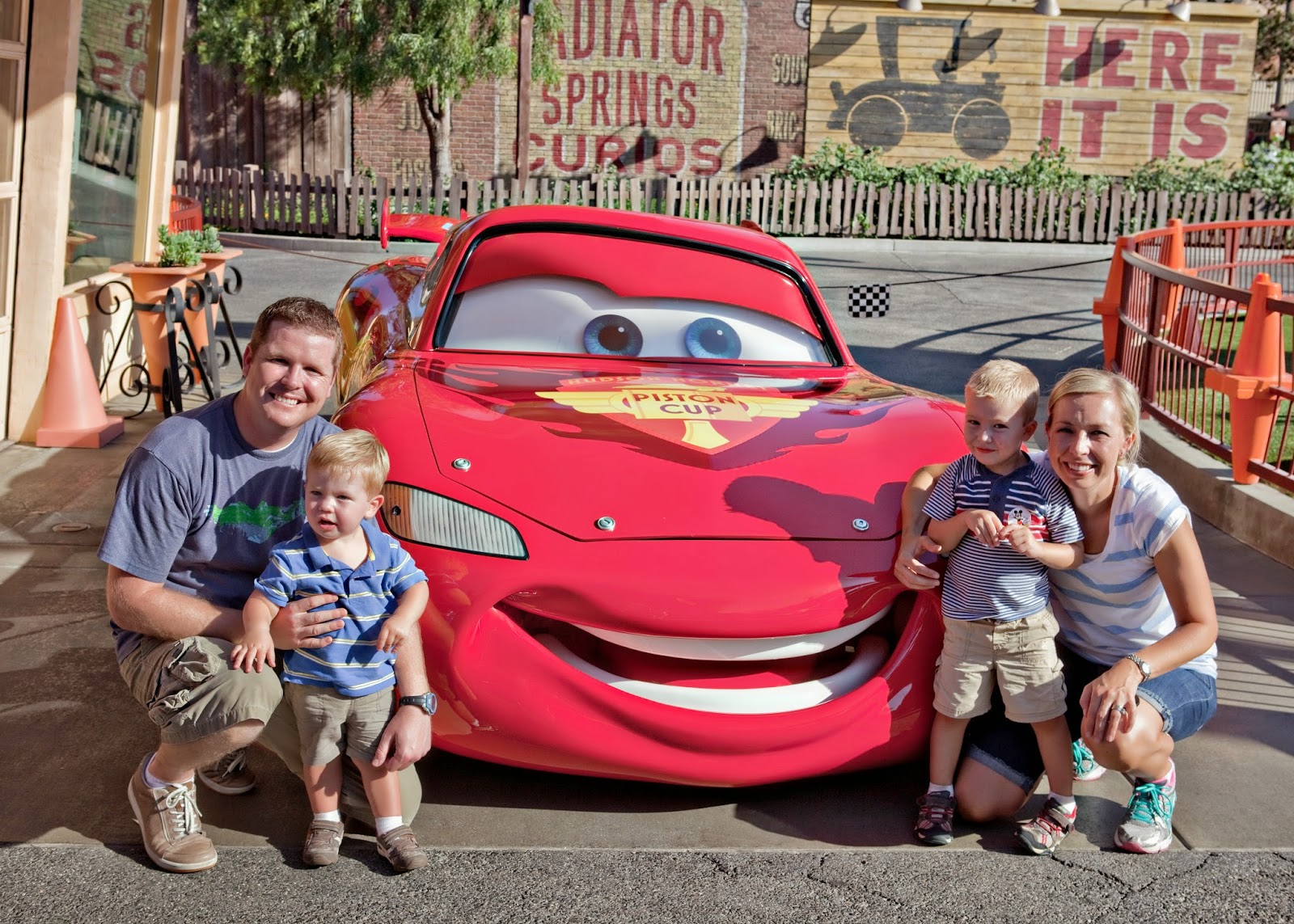 Noah loved that when he walked up to McQueen and said, "Kachow!" that McQueen answered back with a 'kachow' of his own. 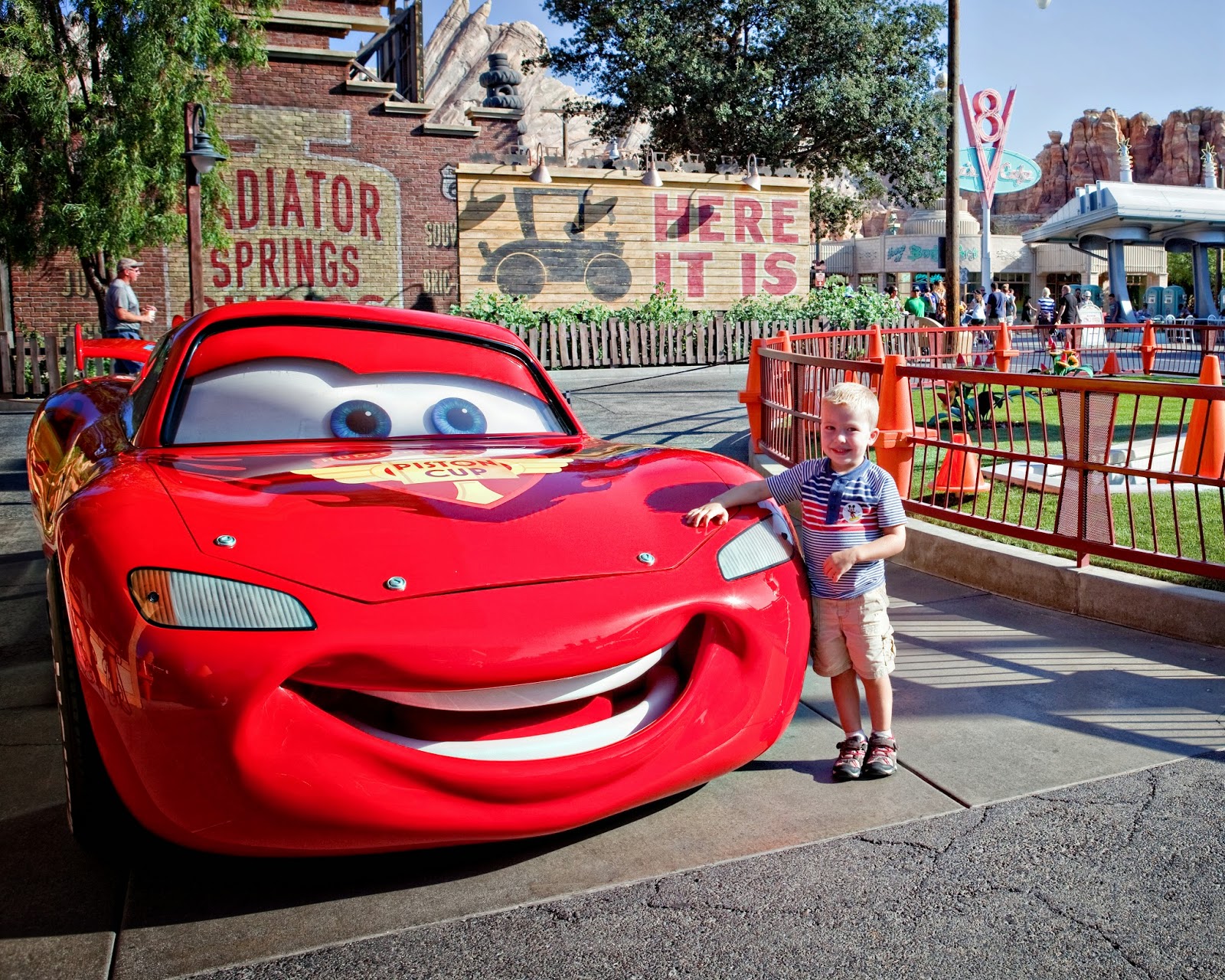 ALL day Noah had been asking when we could go back to Sarge's store.  There were a few toys he'd has his eye on since day 1, and oh boy he was antsy to get back there.  Anyone who knows Noah well knows that when he gets really excited and he just can't hold it in, his little arms start flapping up and down like a bird.  Once he saw the cashier ringing up Windlifter (from Planes 2) and Darth 'Mater' he about took off in flight. 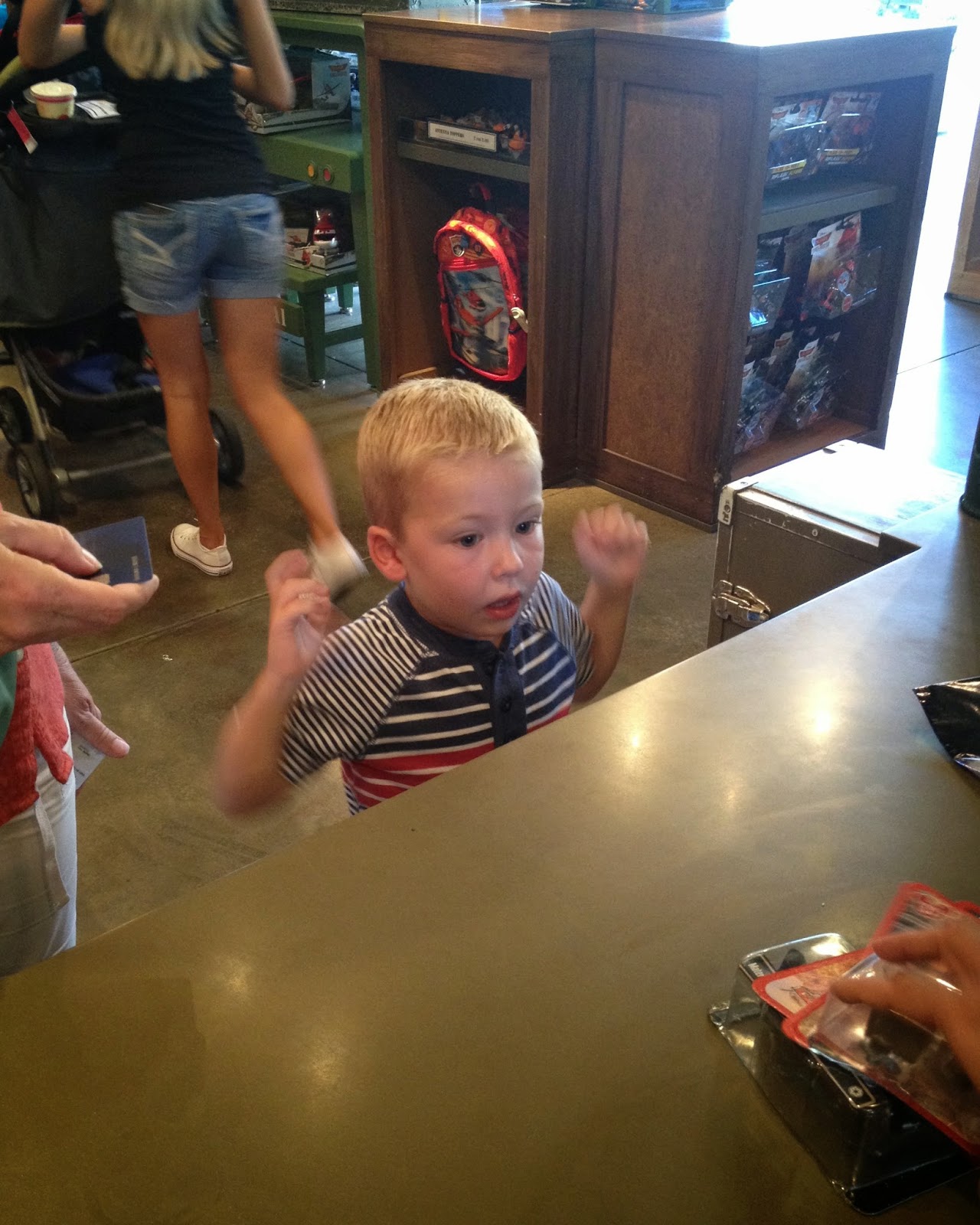 His trip was complete.  Seriously.
Before we knew it the sun was down, 8 p.m. was upon us and we  were trying to squeeze in two more rides (for a total of 6) on Radiator Springs Racers. 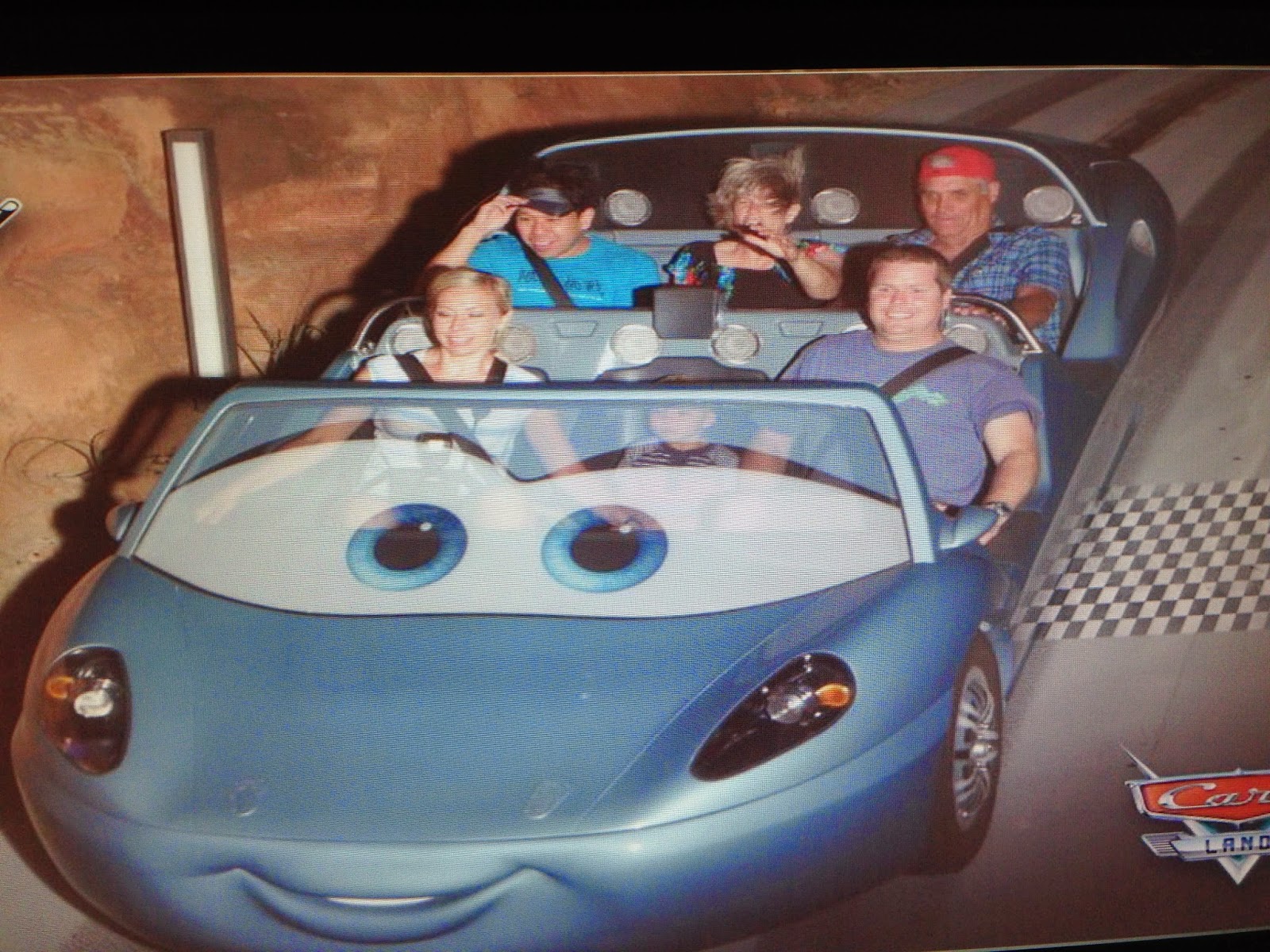 Once again, Luke was such a good boy, while others were off having fun -- one last time. 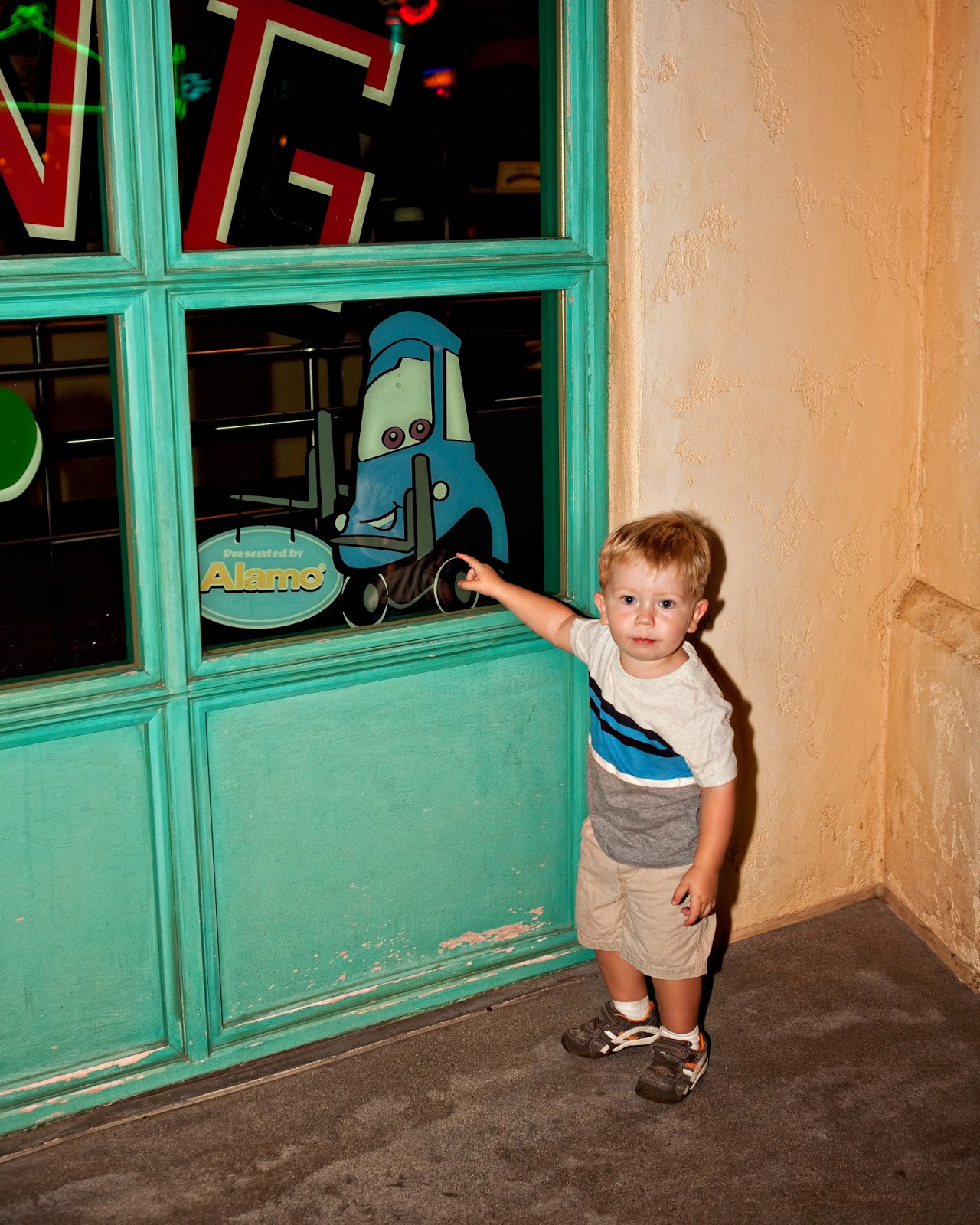 I also tried to squeeze in a picture of the boys with their awesome, sweet Grandma before the night was over. 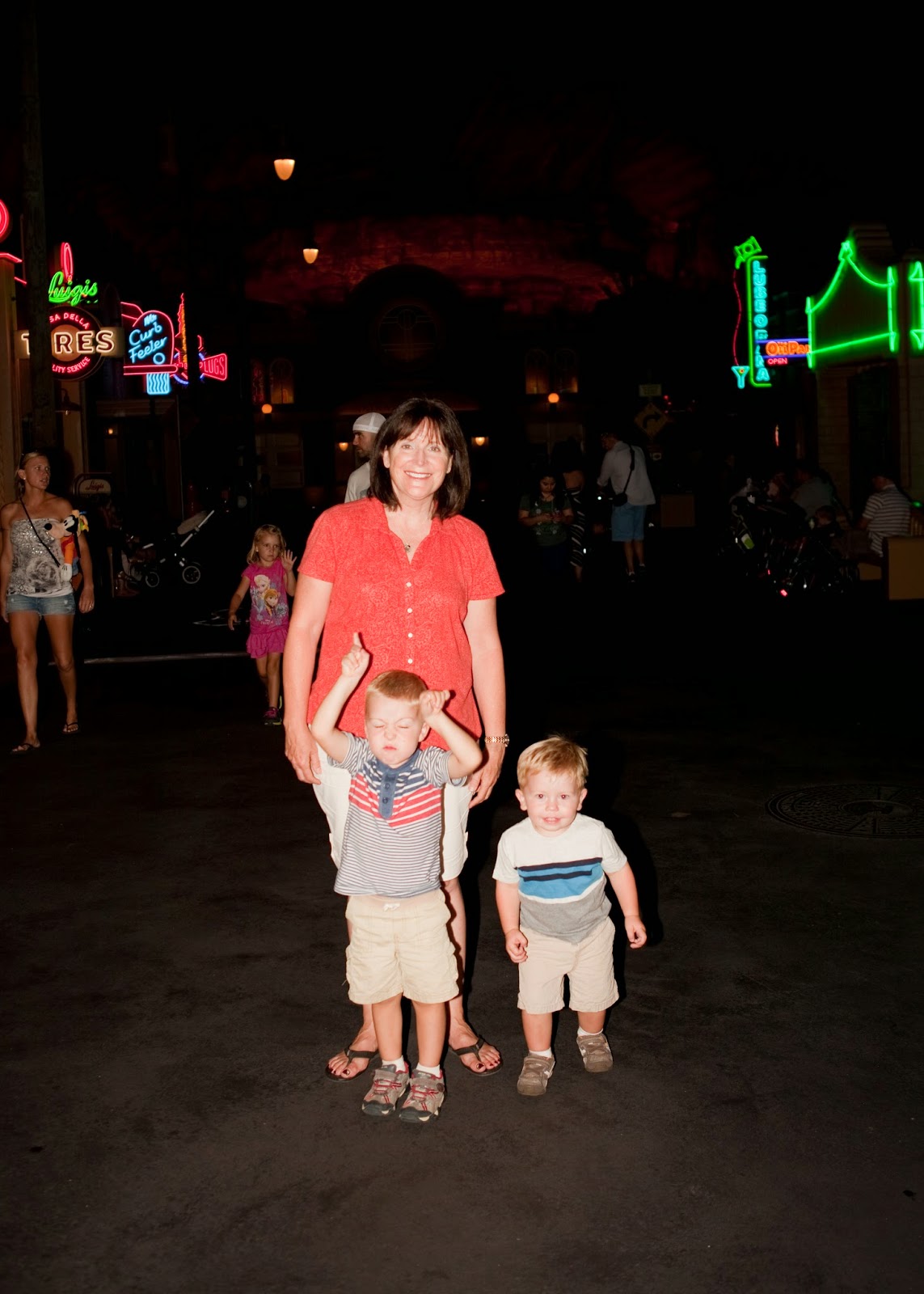 Oh, we're so glad she experienced this family adventure with us!

As we left the park and walked back to the hotel I was tired.  My goodness, we were all tired.  But at the same time I felt exhilarated and excited.   I kind of had an extra little spring in my oh, so tired steps.

We had just completed three days of pure fun.  I had seen my boys' eyes light up over and over and over again.  Listening to Noah and Luke recount their adventures and experiencing it ALL with them was just fantastic.  We had filled our plate with new experiences and memories that will keep us talking for years to come.  Who knows when it will be, but I can't wait for all of it to happen again the next time Disneyland comes around for our family! 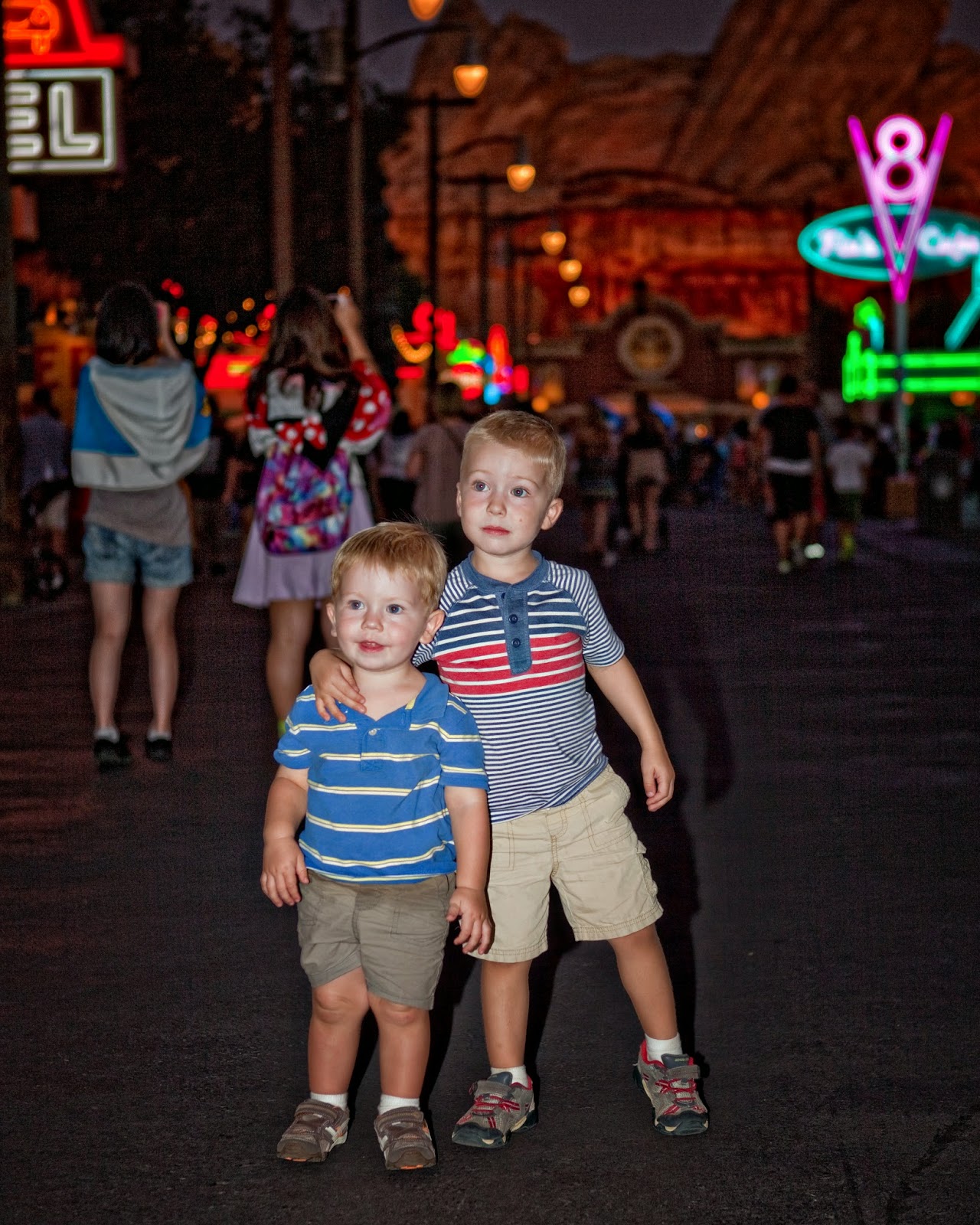