Never in my life have I been so sick.

The last eleven weeks can best be described as unforgettably wicked.  The nausea came on fast and was, well, disabling.  I was on hormone overload (literally...until I had an ultrasound, the doctor thought I might be having twins because my levels were trending high) and every pregnancy symptom possible came on immediately and extreme.  For two weeks Nate left for work with a wife crying on the couch, both of us amazed that this pregnancy was so different.

And it totally caught me off guard.  My other first trimesters have been hard and full of regular, horrible nausea, but this was something of a different sort.  Functioning on a schedule and thriving on a to-do list quickly disappeared.  I just marked a successful day by hugging my boys a lot and making sure I read to them.  Oh, and they were fed.  That was it.  Teeth got brushed -- mostly, we tried to get dressed by lunchtime (sometimes), and PBS shows got us through the day.  It was a pathetic form of functioning in my book, maybe because it's so far from our norm.  But it was the best I could do.

Thankfully, I got some medicine on board.  While it didn't change things dramatically, it did get me off the couch -- most of the time.  That was progress enough. Too bad a major side effect of that medicine is drowsiness!

Just feeling lousy was hard enough.  But I saw how the whole energy of our family took a hit.  Parenting from the couch isn't very successful.  Oh, sure, we were fine and it was temporary, but it just wasn't us.  Nate took on as much as he could.  I don't know if I've ever loved him more or been more grateful for him.  Talk about 'saving the day,' over and over again.

The good news is that in the last week, especially, things have started to take a turn for the better.  I'm anxious to get off of the medication, because just dealing with normal pregnancy drowsiness is enough.  But, it's also still a necessity for a little longer.  For the first time in months I took the boys to the park, instead of just sending them with someone else.  My pace is slow and my muscles have kind of turned to mush, but just doing some 'normal' things feels good.  And hopefully, in the coming weeks I can phase some of those other normal things back in.

This little girl.  She may very well have been an only child had she come first.  I declared early on that whether this pregnancy worked out or not, I was done.  We were going to be a family of two kids or three.  To put ALL of us through it again was not an option.  Thankfully, this didn't result in miscarriage #4 (yet...I'll always be hesitant and worry.  That's just part of pregnancy for me.) and our family gets to experience the magic and fun of a little girl.

And speaking of that girl.  Well, the girl part of it sure caught me by surprise.  I just envisioned a little family of three boys: three white church shirts with ties, three Eagle Scouts, three boys to prepare for missions.  So when the genetic counselor told me we were having a girl, I just had to take a minute on that one.  The funny thing is that a few weeks prior my personal prayers just kind of changed.  I went from asking for 'it' to be healthy to 'her' and 'she'.  It just felt natural and right.  I should have known.

After the news sunk in a little, I couldn't help but smile about the reality of a girl coming to our family  To start, I know for sure that the right baby for our family is on her way.  As a friend reminded me, she is the one who will always call home.  :-)  She will give her big brothers lots of opportunities to practice being gentlemen.  And this little wonder will round out and bless our family in ways that we can't even imagine yet.  It's going to be amazing.

For weeks I had been asking Noah if he thought it would be fun to have another baby in the family.  Every time he responded with something like, "No mom.  We have enough babies.  We have Luke.  We don't need any more babies.  No more babies Mom."

So naturally the boys' reaction to a sister was mixed.  Noah initially screamed, "Noooooooo!" when we told them about another baby.  I asked them if they wanted a girl baby or boy.  Both boys responded with "A girl!" And when we told them they were right, huge cheers erupted.  Something about a sister turned that biggest brother's heart in the right direction, and he's been excited ever since.

Maybe it helped that after sharing hugs and answering lots of baby questions (No, Noah, she's not going to sleep in your room.  It was so sweet of you to offer though!) we hurried off to In 'N Out for pink, strawberry milkshakes.  What better way to celebrate!  Noah immediately walked up to the counter and answered the question, "What can I get you?" with "We're having a baby in our family, and it's a girl baby!" 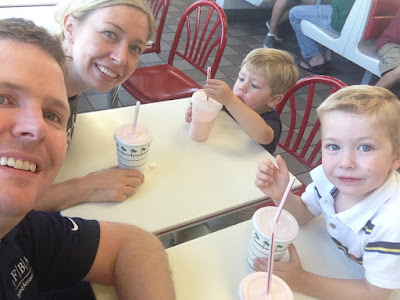 Between praying for weeks that these little boys would welcome the idea of a sibling into the family and milkshakes I think we're in a pretty good place...for now.