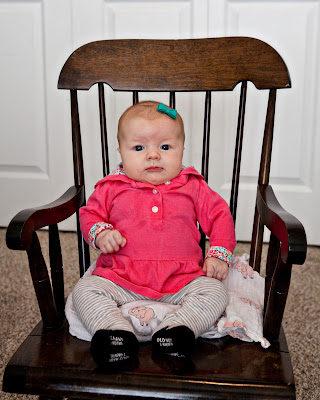 Oh, sweet girl.  You are more awake, more smiley, and a bit more dramatic than the month before.  We love it all (usually), especially those round cheeks becoming more full with each passing day! 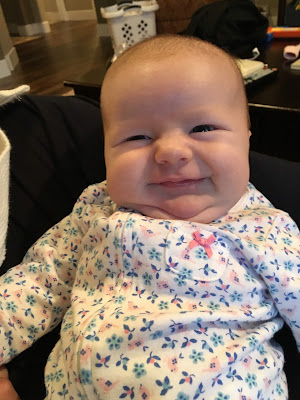 I can hardly stand it when that smile starts and your eyes twinkle with happiness!

We were all smiling right along with you when you started to give us some happy expressions.  That day, January 5th, was a memorable one.  Your brothers gathered around and we all made the silliest noises and faces to get as many smiles from you as we could. 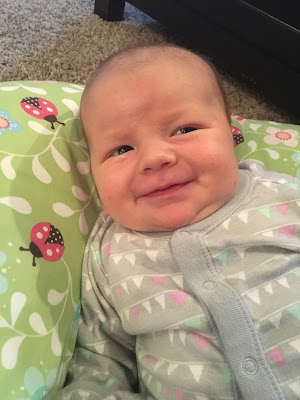 You are most smiley first thing in the morning, and lately it's a bit of a competition to see who can get the biggest smiles from you. 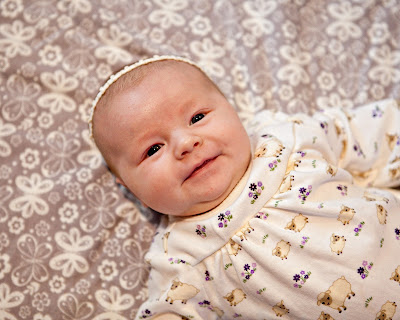 It was no surprise after being around so much family all the time that you got your first cold at the beginning of January.  Lots of holding, extra long feedings and being propped up got us both through a few less than wonderful days. 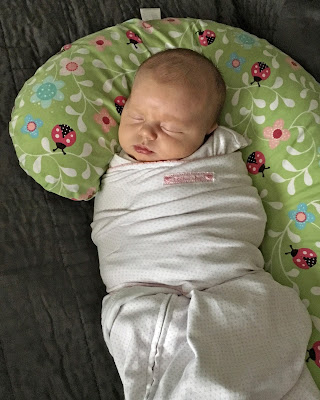 And then you were back to this: 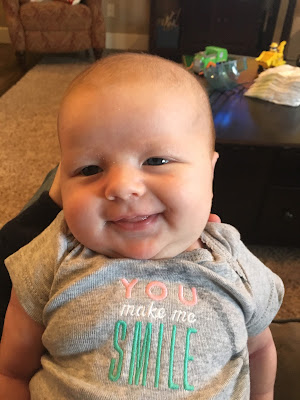 Well, most of the time at least.  The exception would be when we're just about anywhere but home.  Because that involves your current worst enemy: the car seat. 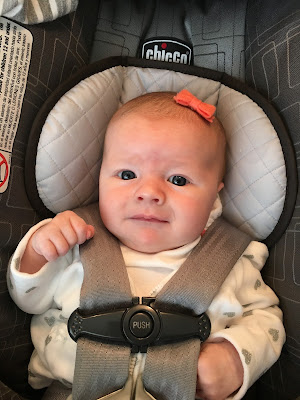 You have no patience for being strapped into that contraption and sure let us know almost immediately that you want out.  NOW. 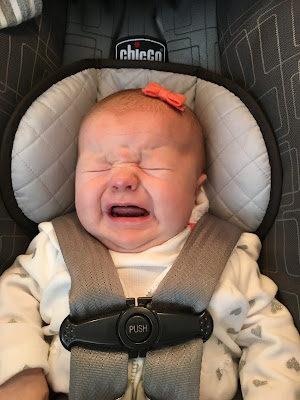 And you have similar feelings for being outside in general right now, which I kind of understand.  Between the bright sun and cool breeze that seems to repeatedly startle and frustrate you, even being in the stroller has been mostly a bust. 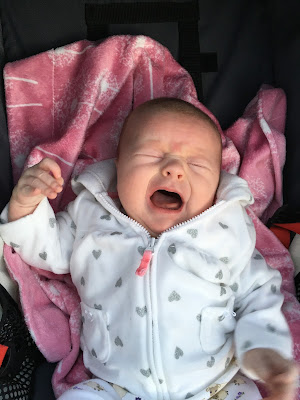 So, we'll give you a few weeks, or months, or whatever it takes, and eventually, you'll come around to understanding that the car is your gateway to adventure.  Trust me, you want to get out of this house every once in a while!

Hating the car seat and having a very gassy tummy have both contributed to shorter than acceptable naps and a fair amount screaming.  The good news is that if you're being held, you're pretty darn happy.  So, for the most part I've just come to accept the fact that things on my to do list will get done later, like when you're in kindergarten maybe.  Truthfully, I'm grateful that there is a way to console you even if it does inhibit any kind of productivity in my world, and I'm also thankful that I'm the one that you find comfort with.  I sure hope it always stays that way. 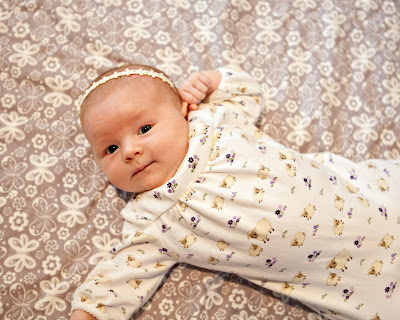 You are, in fact, the only one of my three babies who will snuggle up on my shoulder and fall asleep.  It's a dream! 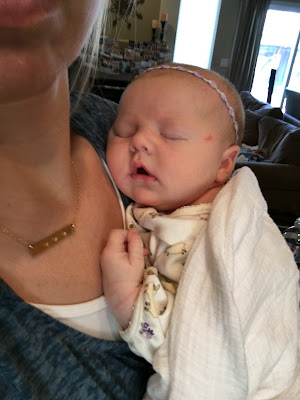 You are growing faster than we can keep up with! Your three month clothes will soon be a thing of the past.  The only remaining newborn hair you have is a bit of 'old man' fringe around the ears and back.  And, sadly, I think it's only a matter of days before you don't fit on my lap anymore for diaper changes. 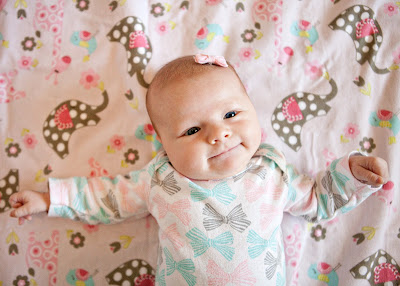 Your eyes have started lightening up into a beautiful blue, following the trend of your brothers. 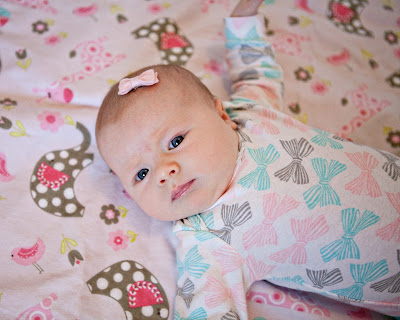 It took a little convincing, but you're out of the rock and play for sleeping.  Turns out that sleeping on your back isn't so bad after all! 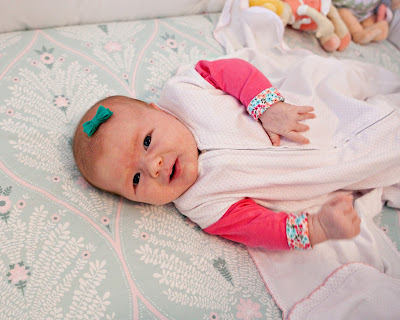 Most of the time you'll sleep for a four hour stretch during the night, but, boy, I've felt spoiled for the few nights that it's been five.  Thanks! 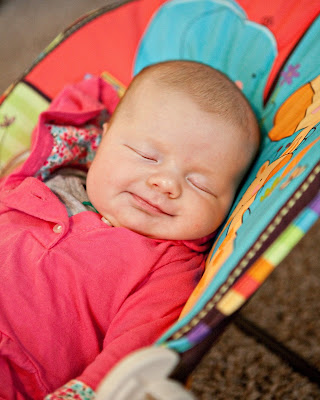 Finally, we can't forget these brothers of yours.  They sure find a balance between playing off in their own world and having you be their complete focus.  Luke continues to talk to you in the highest pitched, sweet voice when you're awake.  A few nights ago Noah sang you to sleep and then said, "Mom, I just love her." 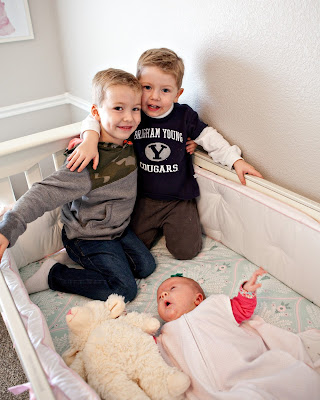 Those brothers aren't getting quite as much attention from their mom as they'd probably like right now, but they're handling it well and, most of all, loving you all the day long! 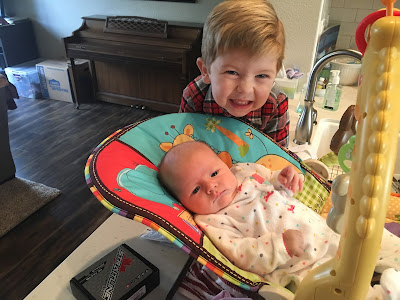 Those cheeks are delicious! Where did you get her bows and how are they sticking on her head? They're sk cute! Do they stay well?