Noah got his first haircut on Monday.

It was traumatic...and not in the way you might think. 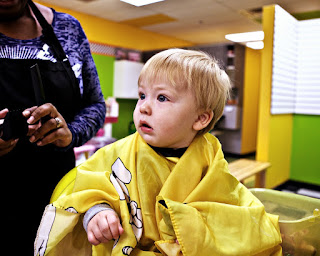 Not knowing how he'd handle it, I made a little trip out to Roseville to a salon just for kids. Surely they'd be pros at cutting my little guy's hair, right? That's what they do: cut KIDS' hair, for heaven's sake. 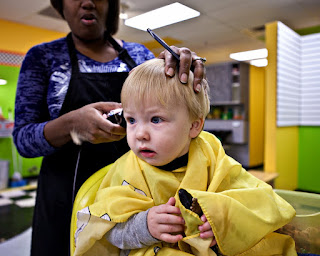 Noah was loving it. There was a cape and a new bucket of toys. And, the whole thing was topped off with the buzzing sound of clippers. He was totally into it.

When the stylist showed him the clippers he looked at her like, "O.k., go for it." 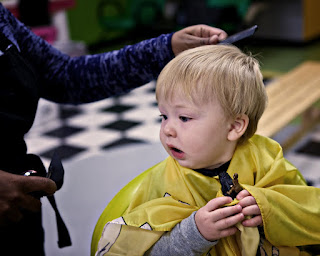 After the clippers, trauma ensued. I have no idea where this lady got her license, but she shouldn't even be licensed to cut paper, not to mention my little one's hair. 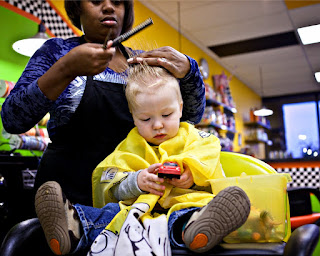 The damage was done, and it was bad. Uneven and just horrible. I didn't dare ask her to fix it because I was afraid it would only get worse. I felt terrible. I had taken my sweet Noah for a big boy experience, and he looked like I'd let him cut his own hair. 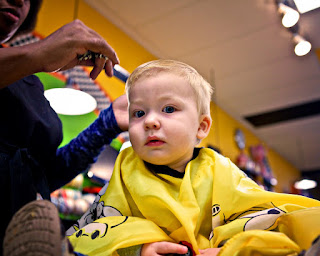 Nate thought I was over reacting, but I hated it. I really hated it. The next morning I headed over to the salon and asked for help. The stylist said, "Well, it is a little short in the front, but I'll try to at least make it better." Noah held perfectly still while she straightened, textured and just helped that little head of hair look like it didn't just get cut by the weed wacker. 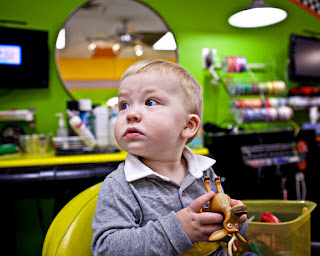 After five days, I'm not freaking out anymore. But I strongly advise not going to Tangles for Kids in Roseville. What a huge mistake. Nice, friendly, and sweet with kids does not yield a good, or even decent, hair cut. I should have just gone to the salon in the first place!

And, Noah, you were a champ. Next time it will be a good one on the first try, I promise.
Posted by Dianna at 3:36 PM