Noah is one week old today! 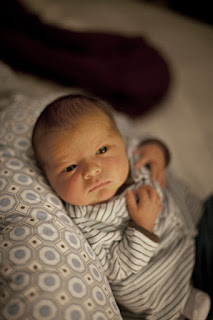 Last night and today I've been having those "One week ago right now..." thoughts. What a special time that was for all of us. 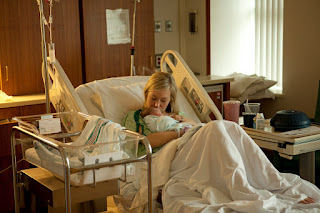 This little guy has shown right from the start that he is just fine with getting a little extra attention--from anyone who will give it. Because of his birth weight and being born 8 days early, he was labeled LGA (large for gestational age) which meant a bunch of glucose tests. 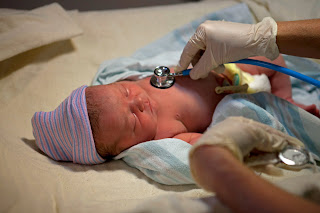 He failed his first and second hearing screenings, which meant more attention and an even fancier test -- which he passed. 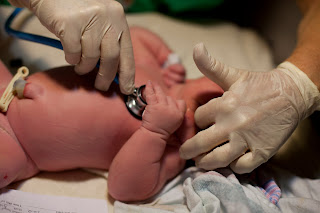 And, he decided to go on a little pre-holiday slim down and lost just about 10% of his body weight over a period of days, which meant lots of feeding from mommy and three trips to the pediatrician for weight checks. He's doing great.

Noah decided right from the start that he was going to be a baby that should be held -- ALL the time. For eating, for playing and for sleeping. He hates being swaddled and laying on his back. (Um, isn't that how babies are supposed to sleep these days?) 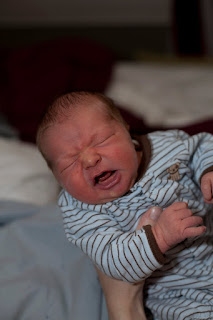 He does, however, love being cuddled, snuggled and sleeping on anyone's chest...all day and all night long. His mommy and daddy have tried the suggestions in those really smart baby books we're reading, but Noah isn't interested.

Good news though, after one week, we may be making progress. After strongly protesting while getting a little sponge bath this morning, our little attention-getter completely calmed down and put himself to sleep. What? This little guy taught me this morning that he's really in to "water music" -- not the classical stuff, just the straight from the faucet kind. 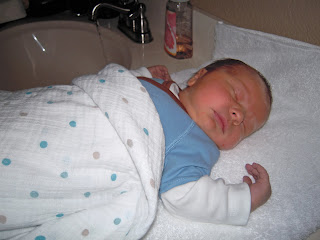 Whatever works, right? Thank you City of Folsom for not getting around to installing our water meter yet. I promise we'll curtail the water wasting as soon as possible if this works.

Week one has been miraculous, exhausting, and, most of all, wonderful. 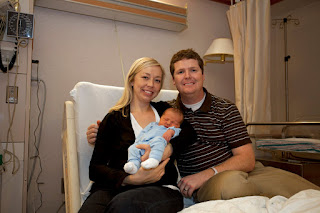 Through tears of happiness and exhaustion the first thing I remember saying when Noah was placed on my chest after being born was, "We've been waiting for you." He is nothing short of a miracle, an answer to so many prayers, and simply adorable. 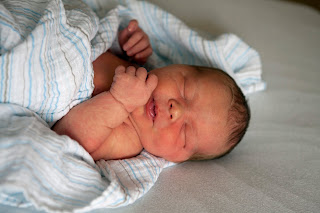 I am so happy for the both of you. He is darling! Have you ever had the thought of him being colicky? I know Levi was and he would only calm himself when the water was running. I read somewhere that was a sign.

Enjoy every little second because they grow WAY too fast!!

Oh Dianna, he is perfect!! Congratulations to you and your family. I spoke with your mom and dad on Sunday and they were just beaming (definately very proud grandparents) =)
Congrats again!

Congratulations! He is truly beautiful and I just love those little cheeks! I'm so happy that you are all healthy!

Your parents have been in 7th heaven, you should have seen your dad's face beam when he announced little Noah's arrival in Sunday school!

Oh, what a sweet, sweet baby!! I am so thrilled for you guys. Get as much love and snuggling as you can. It is a natural high hugging and cuddling them while sleeping. I LOVE IT!!!! Love you!!

he is adorable! congrats to you and nate!

He is such a beautiful baby!! I love the hair and the already-little-chubby cheeks! Ignore all the books and just enjoy cuddling for the first little while!! They grow out of it sooooo fast (although on some of the sleepless nights it may not seem like it).

I am so excited to now keep up with all an adorable little guy he is!!! fun and exciting that are going to be coming your way, all the new adventures you will face as now a family of three. wha

Everett was a horrible sleeper. I finally put him on his stomach so he would sleep for more than 40 minutes. I figured my sanity was worth a little break in the rules.

Congratulation! He is super cute can't wait to see him in person. You look really great (I'm not kidding). Every baby is different. Just go with whatever works for him. I read tons of books too and Bryant is the anti routine kid. So I have to always come up with something new. But you know what I think if our babies don't fit in the general type, that just means they are extra special. And Noah is extra special. Give me a call on your on time. We're so happy for you.

He is adorable! I am dying to see him in person too. :) What a fun Christmas it will be for you guys this year! Dianna, make sure you get lots of naps...and let me know if you need me to come hold little Noah, or clean your house, etc. I'd be happy to do anything you need. I've been there and I know how exhausted you are feeling right now. :) We love you guys- have a great Christmas!!

The great thing about your new job is that your main duty is just to be with him. Cuddle and love him all you can. The first one is the only one that you can devote that much time to. It's truly Heaven on Earth. He is just beautiful, and each day he'll get things figured out more and more. Good luck and Merry Christmas.